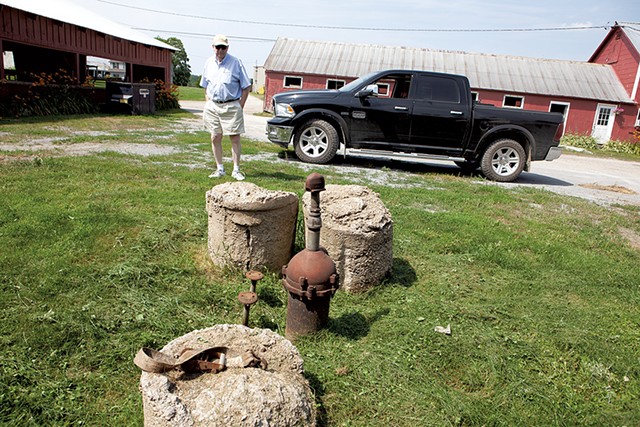 When Vermont Air National Guard officials asked John Belter in the summer of 2017 if they could test the well on his South Burlington dairy farm, he agreed without hesitation.

Regular tests of the 150-foot-deep well just northeast of the air guard base had for years shown the water was clean and safe for his 400 dairy cows to drink.

"We always said it tasted better than city water because it didn't have chlorine," Belter said last week from the farm once owned by the family of Ethan Allen.

So he and his wife, Joyce, were stunned when officials returned weeks later saying the test for other contaminants showed their well contained potentially toxic chemicals known as PFAS.

The Belters, like most Vermonters, were aware that perfluorinated chemicals used to make products such as Teflon cookware and waterproof clothing had been discovered in 2016 in wells around the former ChemFab factory in North Bennington.

The plant operated in North Bennington from 1978 to 2002, baking Teflon onto fiberglass fabrics to make durable, water-resistant panels used in structures such as domes over sports stadiums. Airborne emissions from the factory are believed to have settled on soil in neighborhoods near the plant, leached into the groundwater and contaminated more than 300 wells.

But Belter had no reason to think his property 120 miles to the north might be at risk. That's why the test results blindsided him.

They showed PFAS levels of 305 parts per trillion, 15 times higher than the 20-parts-per-trillion standard set by the state Department of Environmental Conservation after the Bennington debacle. The suspected culprit is the firefighting foam used for emergencies and training exercises at the nearby air guard base until the practice was discontinued in 2015.

The results meant Belter's cows — and possibly even his kids — had for years been drinking water that was likely contaminated with PFAS.

PFAS compounds have been around since the 1940s and have become nearly ubiquitous in consumer products. They make carpets and outdoor gear water repellent, and cookware nonstick. The strong carbon-fluorine bonds that make the compounds so useful, however, are the same properties that can make them a problem for human health and the environment. It can take PFAS decades or longer to break down, according to the U.S. Environmental Protection Agency. This has earned them the moniker "forever chemicals."

"It is really important for people to understand that this is not just isolated to Bennington." Jen Duggan tweet this

"I felt like my farm just turned into a swamp or something," said Belter, who has operated the dairy for 45 years.

The Belters learned the hard way what the rest of Vermont is finding out — that PFAS contamination is a widespread problem.

"It is really important for people to understand that this is not just isolated to Bennington," said Jen Duggan, director of Conservation Law Foundation Vermont. "This has the potential to impact a large portion of the state."

The warning signs led the Vermont legislature to pass a law this session that called for tests of all public water systems, establishment of surface water standards for PFAS, and a plan to get a sense of other potential PFAS contamination across the state.

The work began July 1 and is meant to build upon Department of Environmental Conservation sampling last year that produced some worrisome results.

It found PFAS contamination in a water system near a former wire coating facility in Pownal; it also found groundwater with levels above the state standard near wire facilities in Shelburne and Colchester and near a battery facility in St. Albans. The effort unearthed contamination linked to PFAS-laden firefighting foam at airports, including the air guard base at Burlington International Airport and a smaller site at Rutland-Southern Vermont Regional Airport in North Clarendon.

The initial study raised just as many questions as it answered, prompting the legislative mandate to expand the sampling, said Peter Walke, deputy secretary of the Agency of Natural Resources.

"We worked hard on this bill to give us the ability to get on the front foot, from a regulatory perspective, to make sure Vermonters are protected," Walke said.

The expanded investigation now under way will include the following measures:

Testing all 700 public water systems in the state for PFAS compounds by December 1, 2019. Walke described this as a "Herculean task," given the range of water systems and complexity of the testing protocol.

Drafting a plan to test surface waters, as well as fish and aquatic organisms, by January 15, 2020, to inform a surface water standard for PFAS.

Additional sampling at high-risk locations such as electroplating businesses.

Testing the 80 or more car washes in Vermont to learn if waxes, which are known to contain PFAS compounds, have migrated to nearby drinking water supplies.

Determining whether sludge from wastewater plants sows PFAS in the soil when applied as fertilizer on farmland.

A River Runs Through It 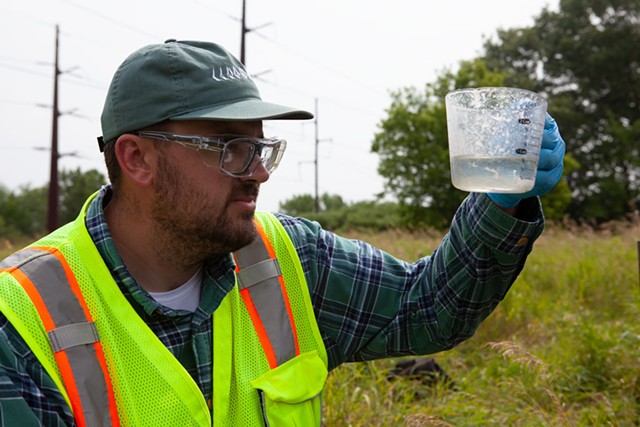 The total cost of the investigation is difficult to pinpoint, but it could reach $1 million, Walke said. The state is suing the manufacturers of PFAS, including DuPont and 3M, in part to recoup the cost of testing and remediation efforts, he added.

The state is not alone in expanding its PFAS investigation. The air guard is trying to figure out the geographical extent of the contamination from its use of what is known as aqueous film-forming foam.

The guard stopped training with the foam in 2015 but discovered in 2017 high concentrations of PFAS in several areas of the base where the stuff had been used or stored, according to studies.

"It's certainly as bad as the most contaminated wells in Bennington right near the plant — maybe worse," said Richard Spiese, a hazardous site manager with the state Department of Environmental Conservation.

Concerned about how far the contamination has spread, the guard has launched a wider round of testing all the way to the Winooski River. 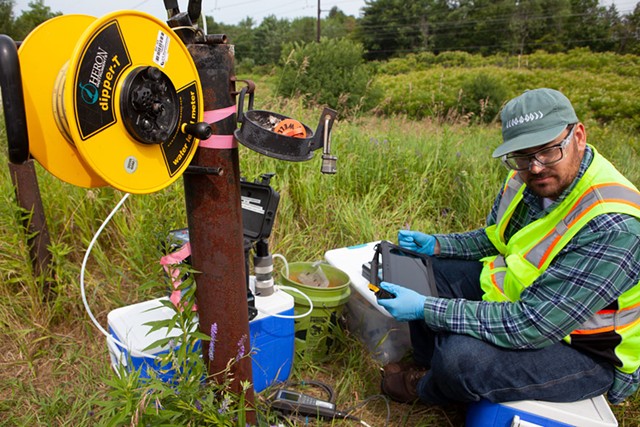 Aaron Sutton, an employee of Virginia-based engineering firm Parsons, last week tested a 46-foot-deep groundwater monitoring well on land southeast of the base as part of the new effort. He said the company had recently taken a number of new soil, groundwater and surface water samples in the area, including from the Winooski itself. He didn't know the results, and company and guard officials said they could not yet share them.

But Spiese said previous results and new data suggest that chemicals from the base have likely contaminated Belter's well and nearby waterways.

"Some of the new samples show PFOS getting as far as the Winooski," Spiese said of the river that flows into Lake Champlain, using the acronym for a specific chemical in the PFAS family. 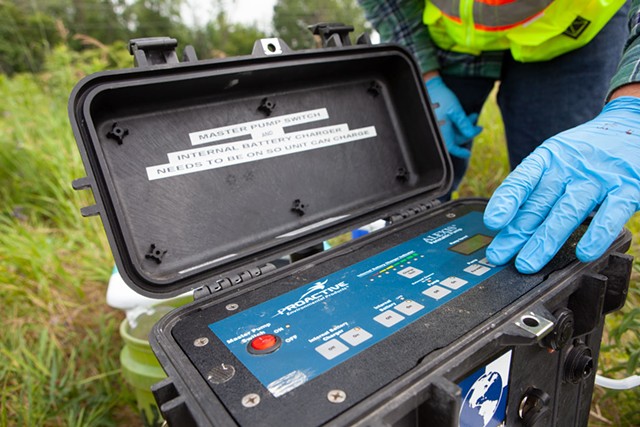 The guard is still "connecting the dots," and more work is needed to confirm and understand the samples, but Spiese said the findings are not a surprise.

"I think we always knew that was likely," he said of the chemical compounds reaching the river.

A Washington, D.C.-based Air National Guard spokesperson said it takes the cleanup "very seriously" and is committed to conducting an open, transparent investigation. But Lt. Col. Devin Robinson also urged people to refrain from speculating about the sources of contamination until the report is final.

"We certainly appreciate the public's interest in this matter, and the Air National Guard is committed to providing the completed report as soon as is practical," likely in September of 2020, Robinson said in a statement.

Shannon Kelly, an environmental manager at the Vermont Air National Guard base, put the cost of the most recent study at about $750,000.

Fears for the Future

Belter, whose property line is just a few hundred feet from the base, said he's long worried contamination is not only fouling his well but the river, too.

The air base reworked its stormwater system in the last few years, boosting the flow of a brook running across his property and ultimately into the Winooski, he said. That water is contaminated with PFAS at levels similar to those in his well, Belter said, citing tests performed by the state and a consultant he's hired to continue the work.

The increased flow of polluted water has forced him to keep about 75 cows off their pastureland and in a barn.

"We're concerned about the water that's making it so that we can't use that pasture, but that water is also continuing right on down into the Winooski River," Belter said. "There's no way it's not." He knows firsthand what contamination can mean. For his farm, it was the equivalent of a scarlet letter, at least for a time. His longtime milk buyer, the former Dairylea Cooperative, learned of the test results in 2017 and stopped accepting his milk.

With no buyer for his only product, the future looked bleak for the dairy Belter had hoped to pass on to his son and grandson. Even as they watched their milk being hauled off "to rot in a truck" as they searched for disposal sites, Belter scrambled to prove it was safe.

Twenty harrowing days later, after the installation of a $30,000 filtration system paid for by the state, the crisis passed. The filter now cleans the water, the co-op agreed to begin buying Belter's milk again, and life on the farm returned to normal. Or as normal as life on a dairy farm in Vermont can be under the circumstances.

Standing near a barn under construction to replace one that recently burned, Belter admitted it is a little unsettling to invest in the farm with so many unanswered questions about the water.

"We're spending money making improvements on things, and we don't know what the future holds," he said.

The original print version of this article was headlined "Spreading Concern | Vermont officials know that toxic chemicals have contaminated water sources in the state. Now they're hunting for more"