'Sprawl Repair': Berlin Maps Out a Long Path to Creating a Town Center

Where visitors to the town of Berlin see multilane roads, large parking lots and an aging shopping mall with a 30 percent vacancy rate, Karla Nuissl sees a place to create a new town center with homes, a village green and coffee shops.

Nuissl, who grew up on a farm in Berlin, is working with assistant town administrator Tom Badowski and others to apply for a state program that would help a community center grow. Badowski and Nuissl expect the New Town Center designation — for which the town received conditional approval in April — to assist them with a mission they call "sprawl repair."

Berlin has never had one central gathering place. The most concentrated development lies just off Interstate 89, which runs through town. The state built an airport on former farmland there in the 1960s, and Central Vermont Medical Center was erected a mile and a half to the north. A shopping mall opened nearby in 1985; it's now home to a Walmart. A mile west of Walmart, town offices occupy a small building tucked behind a large Maplewood gas station and convenience store.

A few miles away, the village of Riverton has a working granite shed, about 25 homes and a fire station near Route 12 on the western side of town. Commercial development lines the stretch of Route 302 that runs through town. The rest of Berlin, home to Gov. Phil Scott, is largely rural and still has several farms.

Town officials have chosen to create a new center around the Berlin Mall and hospital because the two-square-mile area draws thousands of visitors and workers, swelling Berlin's population from 3,000 to 12,000 during the day. It's home to the elementary school and two highways that connect Barre and Montpelier to I-89. The Vermont State Police are moving a barracks there from Middlesex. And with 1,300 workers, the hospital is the region's largest private employer.

"There really isn't a sense of community, except for around the school," said John Quinn, who moved to his wife's family farm in Berlin two years ago with their two kids. "There's no place to bump into neighbors unless it happens to be Walmart or the Maplewood convenience store."

Quinn grew up in neighboring Northfield, which has a well-defined historic downtown. "It's just a different feeling when you have a designated downtown and people gather there," said Quinn, who serves on the Berlin Selectboard. "It's an opportunity to have conversations about your kids and different things you're hearing in the community."

Creating a walkable center is a goal set out in many municipal plans. The state's New Town Center designation has been around for 20 years, but only Colchester and South Burlington have used it. The program is designed to help towns attract private investment by giving certain areas priority for public building projects, state grants and other incentives. The designation also helps municipalities create tax increment financing districts and streamlines permitting under the Act 250 land use review process. Among other things, some housing projects in new town centers are exempt from Act 250 review.

In Berlin's case, approval — for which there is no exact timeline — would mean a faster track to infrastructure such as roads and sidewalks to encourage the construction of homes and commercial buildings.

"It's not a platform where everything is going to suddenly be funded, but it does unlock funding streams," said Jacob Hemmerick, the program administrator. "Like most things in Vermont, it's an incremental platform for future opportunities."

Berlin's long-term plan calls for replacing the mall parking lot with a street grid and for building 300 units of senior, affordable and market-rate housing.

The housing is already under way; work is almost complete on a $58 million, 98-unit senior housing development that's slated to open in April next to the Walmart. Nuissl said Starbucks has applied to build a coffee shop next door. And Downstreet Housing & Community Development, an affordable housing agency that serves central Vermont, has applied to build a 30-unit apartment building across from the senior housing.

"Our project wouldn't happen without it," she said of the town center program.

Berlin's leaders hope that public investment in roads and such will attract the new businesses that make a downtown vibrant.

Residents seem to be on board; they approved nearly $3 million in bonds in 2018 and 2020 to increase water capacity. Planners surveyed residents before seeking the New Town Center designation and learned that many were longing for Berlin to acquire an identity of its own — including its own post office and zip code (it uses Montpelier's). The new zip code is not likely to happen, Nuissl said.

"They're not making more of those," she said.

The survey also found that residents want sidewalks, a bandstand and a town green. "There could be playgrounds here, a farmers market ... There are so many iconic symbols of community that Berlin doesn't have that people want," Badowski said. 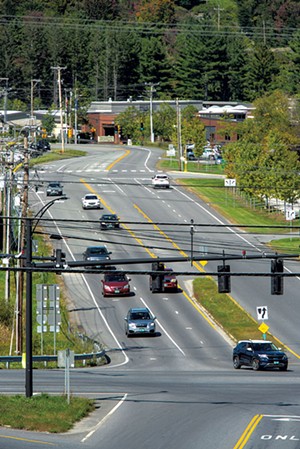 Badowski hopes to put in a mile-long biking and walking path and is looking at ways to narrow the fast-moving Fisher Road, which runs past the hospital, from five lanes to two, adding bike lanes and sidewalks to encourage people to travel by foot.

The timing is right. Housing is scarce, and developers are looking for the kind of permitting breaks and infrastructure offered by Berlin's approach. Anderson, of Downstreet, said she's already hearing from renters who want to reserve an apartment.

Safe and affordable housing is a big priority in the town plan.

With new housing, "we could get a portion of our population that commute every day to live here," Badowski said. "We would see an increase in the grand list and a quality-of-life improvement for folks who are maybe driving 45 minutes or an hour to work."

The town also plans to use vacant store space in the mall to expand its municipal offices.

Nobody is talking about turning Berlin into the kind of traditional center for which Vermont is known, with 19th-century storefronts, churches and courthouses.

"If you look at the up-and-coming areas where people are moving, it doesn't necessarily look like that," Quinn said, citing the Maple Tree Place development in Williston. "[There] you have a number of storefronts that make it feel like there is a community. There is a place to get out and walk around, and a movie theater and housing."

Several Vermont programs encourage dense downtown development as a way of combating the sprawl that happens when homes, stores and offices are built on large lots accessible only by car. The New Town Center program is specifically aimed at municipalities that have few existing public buildings, streets or sidewalks.

The program has only been used twice before because it's focused so narrowly on communities that don't have a historic downtown, said Hemmerick.

Colchester began working on its project, Severance Corners, in the mid-2000s. Progress slowed during the recession, Town Manager Aaron Frank said. So far, just one quadrant of the district has new roads, some apartment buildings and a restaurant.

"Depending on the magnitude of your growth area, you have to temper your expectations with how big the market is in Vermont and how quickly everything happens," Frank said. But he also said the growth happened naturally and is therefore likely to be more sustainable: "Ours happened slower than expected, but perhaps not slower than it should have been."

Berlin officials have been working on their town center project for 20 years. To apply for the state program, a town-paid consultant named Brandy Saxton worked with Badowski and Nuissl, a volunteer who has a full-time job with the state Department of Financial Regulation, to come up with a master plan, regulatory updates, zoning changes, and stormwater and natural resource plans. Years of other such activities lie ahead.

Many towns in Vermont are trying to come up with ways to build infrastructure, Saxton said.

"Berlin is not alone; there are communities out there that are really trying to do everything within their scope to bring in housing," Saxton said. "There are a lot of obstacles, and most of them are not things that the municipality [alone] can fix."

Correction, Oct 1, 2021: An earlier version of this story misstated the name of the gas station and convenience store on Paine turnpike in the town of Berlin. It is Maplewood.