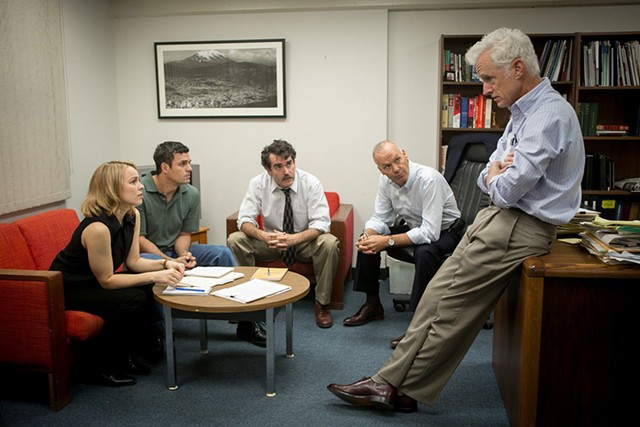 Hold the presses: Award season is upon us and, following decades of virtual invisibility, Michael Keaton will be central to the conversation for a second year in a row. Now that's what I call news.

He's great as a hard-driving editor in Spotlight, one of the great newspaper movies of all time, a film on par with All the President's Men. But then, everybody's pretty great in this automatic Oscar contender from director Tom McCarthy (The Visitor). Mark Ruffalo, Rachel McAdams, John Slattery, Liev Schreiber and Stanley Tucci also do some of the most impressive work of their careers.

Spotlight actually straddles two genres: those of the newspaper movie and, just as significantly, the Boston movie. Like most Boston movies, it tells its story employing a vocabulary of police, powerful institutions, working-class neighborhoods, the Sox and the church. Even Sean Penn went to Sunday mass in Mystic River.

Like that film, McCarthy's deals with the sexual abuse of children. Unlike it, unfortunately, Spotlight isn't fiction. It chronicles in meticulous detail the true story of the Boston Globe's 2001 investigation into the archdiocese's cover-up of predatory behavior by its priests and of the collusion of Cardinal Bernard Law (Len Cariou).

Early on, the paper's new editor, Martin Baron (Schreiber), calls for a meeting with its Spotlight unit, a four-person team devoted to long-term investigative pieces. He's just arrived from Miami. Soft-spoken, Jewish and uninterested in baseball, Baron seems unlikely to prove an inspirational figure to these lifelong citizens of Beantown.

Then he gives them an assignment. Keaton, the team's leader, explains that they're in the middle of a story about police corruption. Baron smiles. "Would you consider putting that aside for this?" he asks, handing them a folder of clippings.

Each concerns a clergy member who molested children and then was transferred to a new parish. As we learn, stories on the scandal have already appeared in the Globe, the Boston Herald, even the Boston Phoenix. (I had to smile at Tucci's line, "Nobody reads the Phoenix anymore," since I worked there in its heyday. And the paper is now defunct.)

Everyone knew. What no one suspected prior to the Globe's investigation, which was both tireless and risky (its readers were predominantly Roman Catholic), was the scope of the crimes and the role that church leadership played in keeping them quiet.

McCarthy and cowriter Josh Singer exercise exemplary restraint. Theirs is both a detective story and a newsroom drama in every sense of the term. But the filmmakers and cast are careful to focus on the drudgery, dead ends and shoe leather that go into an enterprise of this scale, eschewing sensationalism. Of the film's 128 minutes, not one is wasted on self-righteous grandstanding or speech making.

On the contrary, these journalists — who would go on to win a Pulitzer for the work they did to expose 70 priests with more than 1,000 victims — are portrayed as determined and resourceful but hardly without imperfections. More than once, Slattery's managing editor comes close to pulling the plug on the operation out of impatience.

And then there's Keaton. In a scene as understated as it is shattering, he's confronted by a source who knows that the reporter received the same incriminating information years earlier and buried it. It's a brutal moment of self-realization, conveyed with consummate subtlety and, in its unshowy power, characteristic of this superb, immersive movie as a whole.

"We call down God's power on the media, particularly the Globe," Cardinal Law publicly stated at one point. Such a decree is, of course, unimaginable today. The events so brilliantly depicted in Spotlight are among the chief reasons why.