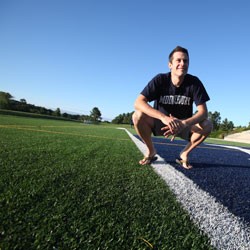 A few years ago, the Middlebury College community engaged in a deep conversation about grass. More specifically, synthetic grass — the material the college planned to put on the new football field. This being Middlebury, the talk went way beyond the cost and aesthetics of authentic sod. A large committee was convened to research the environmental effects of the turf, from off-gassing and water needs to maintenance and disposal. In the end, Middlebury went with FieldTurf, which is made from recycled tires, because it affords a nice mix of performance and low maintenance, and has a light ecological footprint.

Andrew Gardner, 32, the head coach of the cross-country ski team, followed the turf discussion closely. Ever since he was a high school ski racer in Michigan’s Upper Peninsula, he had spent a lot of time considering the intersection of athletics and sustainability, but always kept that interest to himself. “I didn’t share with athletes what I was into,” Gardner says, “and I didn’t share with environmentalists that I was an athlete, because it was a liability either way.”

But at Middlebury, which has pledged to be carbon neutral by 2016, those liabilities became assets. Needing a second role at the school (cross-country skiing creeps into the fall and spring seasons, so it’s hard to coach another sport), Gardner came up with a new job for himself: sustainability coordinator for athletics. He pitched the idea to athletic director Erin Quinn, who had already seen research done by the lacrosse team on how it could become carbon neutral. And then came the football-field saga. “Going through that process, I think, cemented the idea that there would be a continuous need for this,” Gardner says.

Gardner got the OK. As far as he knows, he’s the only person on an American college campus whose job is to make an athletic program more sustainable. In addition to his work for the college, Gardner has organized the first annual Vermont Solutions Festival, this weekend at Stratton Mountain, where Bill McKibben, NHL Hall of Fame goalie Mike Richter and others will riff on sports and sustainability.

Seven Days talked with Gardner about his one-of-a-kind job.

SEVEN DAYS: What was the first project you tackled as sustainability coordinator?

ANDREW GARDNER: The first year, it was just figuring out the landscape. In the second year [2009], I was put on the college’s environmental council and hosted a panel discussion on athletics and sustainability — called “Jocks and Tree Huggers” — with an NFL player [Dhani Jones, Cincinnati Bengals] who’d ridden his bike to the stadium all year; Natalie Spilger [pro soccer player from Chicago], the founder of GreenLaces a leader in the sport-and-sustainability movement; and Alexander Wolff, a Sports Illustrated writer [and Vermont Frost Heaves owner] who wrote the first big piece on sports and sustainability.

SD: And what did you learn?

AG: The biggest thing that came out of that was that it was a good idea to try to gain purchase in the teams. So each team brought forward players who were interested in sustainability, and they formed a committee. We asked them, “What are things your program can do that can tighten up sustainability?” There were problems that were not solvable, such as the questions of transportation and some of the larger purchasing issues. But there were things that could be done, such as more thoughtful equipment purchasing, water use, lightbulb use.

SD: How did you try to make the cross-country skiing team more sustainable?

AG: Using a grant, we converted a pickup truck used to tow ski equipment to run on waste vegetable oil from the dining halls. The oil filtering system is right next to the ski room, so that worked really well. It’s a really visible example and a feel-good story, except for the times when it freezes and leaves me on the side of the road.

SD: Where are the biggest sustainability gains to be made in athletics?

AG: It’s less a question of where the biggest gains are to be made and more a question of how sports can effect change the most. You could easily say that football and hockey are the biggest waste producers, and that’s true, but they’re also the sports that touch the most people. We’re working on cleaning up after tailgates and getting people at the games to recycle.

SD: How much of this job is trying to influence athletics beyond Middlebury?

AG: I get invited to speak once or twice a year at different events. Last year I was a delegate to the 2016 Chicago Olympic bid; they had a large and impressive sustainability program, so we went to Chicago and presented it. I also went to a conference in Indianapolis on sustainability that was tied to the NCAA [National Collegiate Athletic Association]. That was probably the most successful presentation, because there were so many schools there. Some schools, such as Williams College, already had comprehensive sustainability efforts on campus but nothing specifically about athletics, and some had no history of sustainability at all.

SD: Are larger universities starting to think more about sustainability in sports?

AG: Duke University put together a really strong recycling program that’s changed the way that their stadiums are cleaned up. In professional sports, we’ve seen more concern about sustainability in the last few years, for sure, and I think colleges will follow suit. Division III sports is probably where you’ll see the most improvement as budgets get tighter.

SD: What’s going to change in college sports when energy costs get higher?

AG: I think we’ll see more things like what NESCAC [New England Small College Athletic Conference] is doing with basketball — sharing traveling with men’s and women’s teams. The men play in the morning and the women play in the afternoon, or vice versa. It’s less athletically ideal when you have athletes hanging out at the court longer. But suddenly there’s one less large passenger bus cruising around. And it’s always a different scene when men and women travel together; I think it’s a richer experience.

SD: What are you focusing on in the upcoming academic year?

AG: Now the plan is to pick one big effort per year and use the team liaisons to try to drive it. This year, the goal is to increase utility cycling on campus, which means better places to park bikes at the athletic center, less driving from one side of campus to the other.