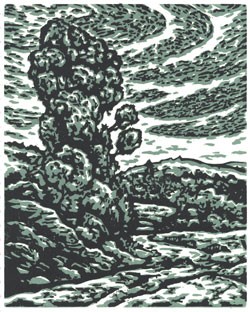 Artists are drawn to the Vermont landscape like flies to cow flop. The state’s gentle geography, untrammeled fields and forests, and rustic architectural gems prove irresistible to budding photographers and painters. Come summer, you’ll spot them behind hedgerows with fancy Canons and portable French easels, doing their darnedest to recreate romantic visions of Vermont life.

Sometimes, even the pros are wonder struck by Green Mountain glory, though they tend to temper their enthusiasm with sardonic touches. (Mud season has a way of bringing bucolic romanticism into perspective, if you happen to live on a dirt road.)

Phillip Robertson is one of those professional artists who can’t leave the Vermont landscape alone. But he brings a unique vision to the modern-day quandary of representation: How to make people see the same old scenes as something other than clichés?

Over the past three years, Robertson has trained his eye on the kind of intimate landscapes the state is famous for: hilly vistas, tree-lined river- banks and partial views of distant mountains. But instead of recreating these scenes in deadening literal detail, he’s been distilling them through painstaking printmaking techniques. A show of his most recent prints, titled “Moments in Meditation,” is currently on view at the Brown Library at Sterling College in Craftsbury.

Though Robertson, former director of the T.W. Wood Gallery in Montpelier, says he’s trying to find his place in the “19th-century pastoral landscape” tradition, his work goes well beyond straight representation. If anything, it owes more allegiance to German expressionism than to the Hudson River School.

Just how does he replace the derivative with the sublime? Very carefully. By choosing printmaking as his medium, Robertson has automatically removed himself from the immediacy of painting, drawing and photography. He prefers to work in linoblock, though he also produces solar etchings and monotypes. All three of these printmaking techniques involve a multistep process that begins with a drawing and ends with a reverse image that is created by removing a material — metal in the case of solar etching, linoleum veneer in the case of linoblock prints, and paint or ink in the case of monotypes.

Robertson says the “happy” accidents of printmaking shape his work, distancing the end product — the print — from his original drawing of a given landscape. He effectively disguises those fillips in the process, however, by using the drama of etching, woodcut and monotype techniques to his advantage. While he creates high-contrast black-and-white areas in his block prints, he often softens the effect with a color, such as a drab green or a dull blue. In “East Hardwick,” Robertson captures a compressed view of a roadway cutting through a valley, which leads the eye to a hillside, and casts it in black and khaki. Even the clouds circling overhead are black, flecked with the greenish hue.

Because Robertson uses oil-based inks, it can take him a week or more to complete this two-color process, which involves cutting and matching two blocks. Getting it right is no small task. But, judging from this show, Robertson has the right personality type for his art form: perfectionism.

The artist is currently experimenting with multiples, or prints from the same block. He likes to take four or five prints from a single linoblock and stitch them into scrolls that he hangs on rods. The difference from one print to the next is hardly discernable, but the collective effect is meditative. Sometimes Robertson uses a recently purchased mechanical hand press to add poetic text beneath each print, subtly changing the context of each image.

Size also matters. Most landscape artists like to depict sweeping vistas in large formats; Robertson works in miniature. The 25 prints on view at Sterling range from about 3 by 4 inches (the smallest, “Toy Town”) to 8 by 10 inches (the largest, “North Country Factory”).

Coincidentally, both of these works depict factories nestled in bucolic landscapes. But just because Robertson draws industrial buildings, don’t expect to see any vernacular little-house-backhouse-barn architectural elements in his prints — or, for that matter any human figures, the stock in trade of renowned Vermont printmaker Mary Azarian. Robertson’s melancholic vision of the Green Mountain landscape is intimate — there’s even something cozy about his factory sites. But it isn’t a place where people and their paraphernalia would be particularly welcome.

This principle holds true throughout Robertson’s work, particularly in the monoprints, which are more aesthetically complex than the block prints. Here the drama is all nature, all the time. And really, nothing else is necessary. Robertson’s exquisite sense of composition and attention to detail bring to life what would otherwise seem like drive-by scenes. In “Moon River,” for example, the lollipop-shaped black branches of a big pine lean into view, practically pointing to the full moon surrounded by concentric circles. The landscape below is ordinary: A river gleams in the foreground, and the dark silhouettes of trees line the horizon. And yet there’s a magic here that is solely Robertson’s. He has invested the scene with beauty.

One of Robertson’s MFA professors at Goddard described his work as having “an absence of sound.” It would appear that the artist prefers to see it as an absence of noise. These are, after all, his “Moments in Meditation.”