At the Worthy Burger, the rules of engagement are clear: You go to eat burgers and drink beer in a casual but clean setting. You can get fries tossed with truffle oil and savory Parmesan pebbles if you like, or a basic green salad and pickles. When it comes to service — getting your food, adding condiments, bussing your table — some assembly is required.

Until recently, if you wanted a cocktail with your burger and fries, you were SOL. But last month, the restaurant introduced a handful of spirited beverages. "The [drinks] are pretty casual," said Worthy Burger co-owner Jason Merrill, sipping a glass of water at the bar last week. In other words, none requires "two drops of this or five drops of that," he added.

The drinks are engineered for fast service. In fact, Merrill said, the recipes are borrowed from favorites at sister restaurant Worthy Kitchen in Woodstock. But they're crafted with thought and quality ingredients, like everything else at both spots.

You still can't order a tequila sunrise or a Long Island iced tea, or even a gin and tonic — the well is stocked only with ingredients for the five cocktails listed on the chalkboard below the beer list. But new bevvies represent the latest in Team Worthy's measured evolution. 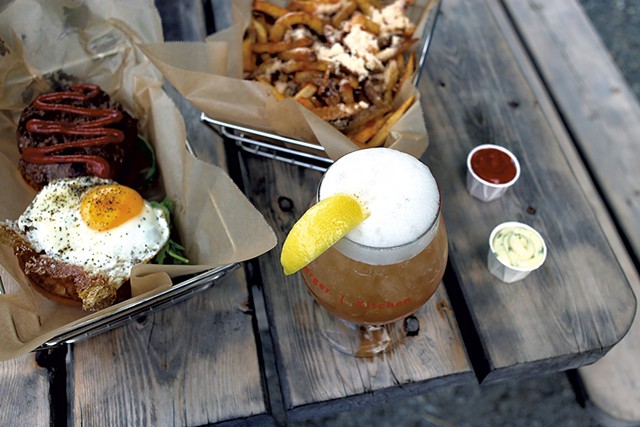 When Merrill, Dave Brodrick and Kurt Lessard opened the Worthy Burger in a low-slung freight house along South Royalton's railroad tracks in 2012, theirs was the first craft-beer bar in the area. At the time, high-quality "fast casual" restaurants were still new to the culinary canon. In New York City, restaurateur Danny Meyer opened his original Shake Shack in Madison Square Park in 2004, but additional locations of the popular burger chain wouldn't open until 2010.

In Vermont, Worthy Burger was one of the very first to serve high-quality local dinners in a format that didn't include traditional table service. At first, the plan was to serve 40 burgers a night, Merrill said. That lasted about a day; the partners upped their daily quota to 60 soon after opening. Five years in, a slow night tallies 100 patties; the restaurant's current one-day burger record is 506.

Early success led to the opening of Worthy Kitchen in 2013, and, with two restaurants thriving, Merrill said he's always looking for new growth opportunities. While the group abandoned a move to Boston last year, he added, "Burlington still lures me," if and when the right location comes along.

As the restaurants grow, their chefs — at Worthy Kitchen, that's Jason Farina — have deepened their relationships with local farms to ensure a steady supply of key ingredients.

In January, Farina linked up with Shire Beef in Vershire, which supplies his kitchen with grass-fed animals from its Wagyu-Angus breeding program. The animals are processed at the Royal Butcher down the road from the restaurant. While the meat is just a standard butcher's blend — "nothing fancy," Farina said — the animals' diet and genetics combine to produce beef rich in vitamins, minerals and essential fatty acids.

Hence, Worthy Burger's beef patties are juicy and delicious — and healthier than some other burgers. That quality clearly appeals in South Royalton. Last week, students and their families pushed tables together for an end-of-semester celebratory feast in the beer garden.

Friendly dogs lounged beneath picnic tables, drooling in anticipation of a dropped French fry or beefy handout. Humans sipped drinks while waiting for their order-ready buzzers to summon them indoors to retrieve their food. Most of the patrons held beers, including coveted quaffs from Hill Farmstead Brewery, Hermit Thrush Brewery and others.

But for some, the event called for a cocktail, and the Worthy Burger obliged.