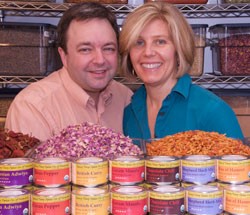 Most days, Rosie the bichon frisé greets Ed Pomicter when he arrives home off of Bay Road in Shelburne. Pomicter, 44, is an anesthesiologist at Northwestern Medical Center in St. Albans, a line of work that has given him the means to live in a home full of sunny open spaces. He heads to the kitchen — decorated with star-shaped pendant lights and a colorful rug depicting tropical birds — to prepare dinner with his two children and wife of 19 years, Thora. Then Pomicter goes downstairs to the basement and gets back to work.

For most doctors, this house would be simply an oasis. One would never guess from its handsome, hardwood-floored upstairs that a business grows and thrives in its cellar.

Last August, Ed and Thora Pomicter debuted Teeny Tiny Spice Co. of Vermont, a line of 12 spice mixes made from organic blends that are ground, tested and packaged in the Pomicter’s sterile, fluorescent-lit basement.

Teeny Tiny began as a name derisively concocted by the Pomicters’ children for their parents’ pie-in-the-sky idea. But the company gets less tiny by the week. After less than a year in business, Teeny Tiny products are available in about 25 stores in five states. The Pomicters have scored the coup of getting their spices added to the Whole Foods purchasing system, a process that often takes years. “Now it’s just a matter of finding a store that has shelf space to take our product,” says Thora of the upscale megamart chain.

She says Teeny Tiny grew from a family Christmas tradition: Each year, the Pomicters prepare an authentic feast from a different country. As they studied flavor profiles from all over the world, their collection of spices grew, and so did their facility in blending them.

Between Ed’s full-time job in St. Albans and Thora’s packed days of homeschooling the kids, the couple found it easiest to use spice blends they’d premixed themselves. “We solved a problem for ourselves,” explains Thora. “Our vindaloo blend has 19 spices in it. You eliminate the need for all the little baggies you buy in bulk.”

One concoction in particular became a hit with the Pomicters’ dinner guests. Composed of chipotle, roasted paprika, Vermont maple sugar and coffee — to name a few of the 12 core ingredients listed on the homemade label — one friend declared it “perfection.” The friend suggested the Pomicters market the product, and the Perfection Spice Rub became the blend that launched a thousand recipes.

That may be a slight exaggeration — but, says Ed, for each variety Teeny Tiny manufactures, the Pomicters hold dozens of test dinners. Where do the ideas come from? “I guess I do most of the creative part of it,” says Ed. “The process has been us being bored with what we’re cooking and saying we need something new. That’s when the research starts.” The family has “an affinity for bold flavors,” he notes. “That’s why a lot of what you see has an Indian or Asian bent.”

Though the Pomicters love international food, they haven’t traveled much abroad. To help them pinpoint regions of origin, a world map papers the door of the main production room. A pair of red coffee grinders mashes the whole spices down to a powder. Unopened 500-pound bags labeled with exotic spice names line one wall. Facing them, dozens of neatly stacked bins hold finds such as red and pink roses for the aromatic Persian Adwiya blend, or the thyme-like ajwain seed that ends up in spicy Ethiopian Berberé.

Though the Pomicters eat mostly local food at home, they note, their organic spices come to Vermont from all over the world via distributors in California and Oregon. “I’ve seen one local person who does dried herbs. I don’t think he could hit [our] price point or quantity,” explains Ed.

That forces Teeny Tiny to rely on the seasonality of products in very different ecosystems. The Pomicters are currently waiting for an Indian crop of curry leaves to become available. “It really reminds us there’s a farm on the other end of this,” says Thora. She may have to eliminate or replace one of the five peppers in the deep, dark Chocolate Chili mix because the Peruvian farmer who grew the pepper for the company has stopped planting it.

“We joke that if the business fails, we’re stuck with a ton of spices,” says Ed of buying in such bulk. He turns to address Thora: “I’ll be tossing rose petals at your feet when you leave the house.”

Spice has quickly grown to define the Pomicters’ lives. Thora says she literally dreams about spices: “It’s all part of us living.”

While Thora is home filling orders, marketing the business and lugging 1400 pounds of delivered spices out of the rain, Ed is often preparing someone for surgery. He says his day job is an ideal fit for his obsession: “The wonderful thing about anesthesiology is, when things are going well, it’s a really boring job. I can still be taking care of somebody and giving them good medical attention, thinking about new things to cook.”

On weekends, the Pomicters say, they devote at least 20 hours each to the business. So does nearly 16-year-old Maddy, who recently joined the payroll. Those hours include demonstrations at local retailers, including Shelburne Supermarket, Healthy Living Natural Foods Market and Kiss the Cook.

For markets, the Pomicters characteristically go overboard in preparing chicken and meatballs three ways each, along with gluten-free and vegetarian dishes. They’re marketing the brand to culinary newbies, who can benefit from the company’s library of online recipes, but also to seasoned cooks looking for convenience.

“Our whole idea is to take 15 minutes to prep, then half an hour cooking,” says Thora. She names David Hugo, executive chef at the Inn at Shelburne Farms, among fans of the company’s home-cooking convenience.

Justin Barker, general manager of Shelburne Supermarket, is high on the brand, too. “You don’t see a lot of Vermont companies going into the dry-spice business,” he says of the Pomicters, who are also customers at the market. “It seemed like a slam dunk to us. It’s organic and not driven by salt. A great package with a great mission.”

The Pomicters especially value feedback from a particular set of customers: natives of the countries whose tastes they seek to replicate. “Someone from Ethiopia said our berberé gave her a taste of home,” says Thora. “It tells us we’re hitting the right note.”

The overachieving Pomicters spent last summer building their own backyard swimming pool. This summer, they’ll be tabling at the Shelburne Farmers Market. Teeny Tiny recently contacted the other vendors in hopes of partnering with a new one each week to offer spice-rubbed delicacies. Their goal is “to feature local fresh food to combine with our spices,” says Thora. “We ourselves are committed to local/organic as much as possible and want to help other local businesses.”

“Kohlrabi will be the big challenge,” jokes Ed.

From a basement in Shelburne to an empire? It sounds like the Pomicters’ lives won’t lose their spice any time soon.

Grease a 9-by-9-inch baking pan with butter. Dust with flour and tap out the excess. Preheat oven to 350°F.

Melt butter and chocolate in a small saucepan over low heat, stirring frequently. Set aside to cool.

Add creamed sugar, eggs and vanilla. Stir in cooled chocolate mixture and mix until well blended. Measure the flour, salt and spice, then sift together directly into the chocolate mixture. Mix batter gently until it is well combined and no trace of the dry ingredients remains.

Spread batter evenly in the prepared pan and bake 33 minutes or until a toothpick inserted in the center comes out clean.

Remove from oven and cool on rack for one hour before serving.