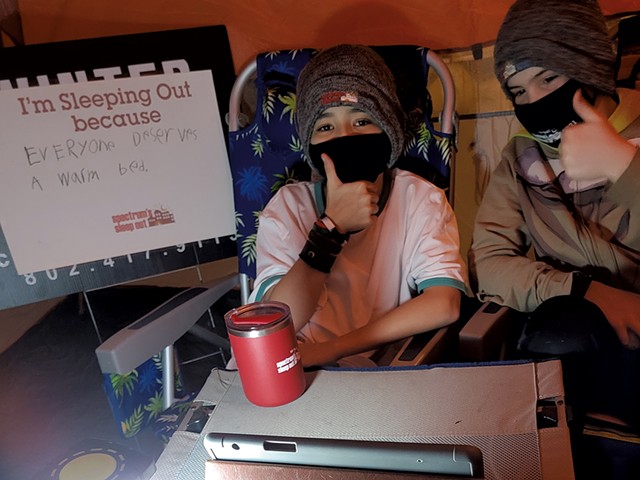 For the past 10 springs, Spectrum Youth & Family Services has hosted a Sleep Out to raise money for the programs it provides young people, some of whom are homeless.

A large group would gather at the First Unitarian Universalist Society of Burlington at the top of Church Street. Spectrum execs and their clients would talk up the organization before everyone camped outside on the downtown church's lawn to approximate the experience of sleeping unhoused in Vermont's biggest city.

"What you hear are the garbage trucks and people yelling at each other," said Erin Barnaby, Spectrum's communications officer. "You feel a little bit unsafe, but not even close to the amount of unsafeness you'd feel if you were lying there by yourself."

That all changed last year with the coronavirus pandemic. Spectrum quickly turned the Sleep Out into a virtual event, allowing people to bed down wherever they were. The changes, and the pandemic, led the nonprofit to fall short of its fundraising goal of $300,000.

With more planning this year, Spectrum's Virtual Sleep Out raised more than $440,000 from some 400 participants, about 270 of whom were students and their families. Both figures were record highs, according to Barnaby.

People slept in tree houses, backyards and parks. The weather that night was cold, in the thirties, with some drizzle.

One of the top fundraisers was the Red Hot Chilly Dippers, a group of women who swim in Lake Champlain all winter. They raised nearly $38,000, according to Barnaby. One member, Tian Berry, has spoken previously about benefiting from Spectrum's services when she was a young person dealing with mental health and housing challenges.

Barnaby said that younger, at-risk people have been adversely affected by the pandemic.

"They had all of this stress to begin with, and now it's gotten even greater; it's gotten that much harder," she said.