Sparkles, Lace and Love at a Valentine Workshop 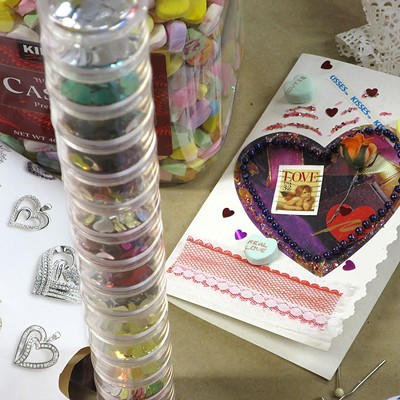 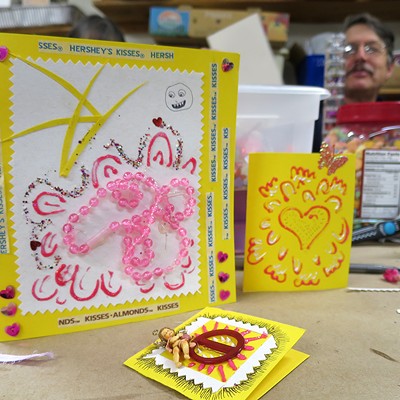 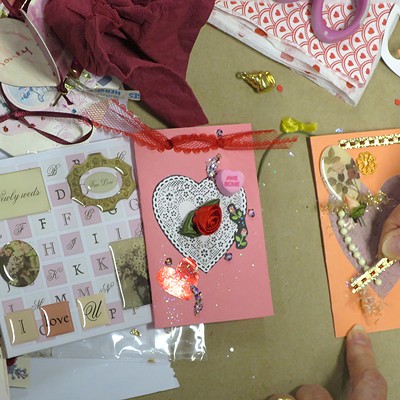 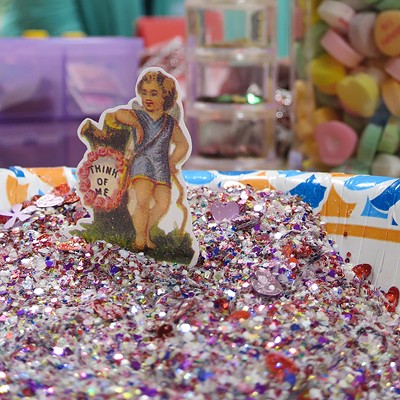 Valentine Workshop with Megan Humphrey
Click to View 8 slides
Megan Humphrey loves cards. The walls of her Old North End studio are lined with shelves holding boxes of product from her company, Sweet Basil Cards. Their themes range from gay and lesbian to Easter greetings to bicycles. Humphrey sells her cards at craft shows and select local shops, as well as through her website and Etsy. But the cards she likes most of all — to make and to give — are valentines.

"I just love love. I think it's the best emotion," she says, seated at a table in her studio. The table is covered with plastic pints of glitter, boxes of ribbon, beads, pinking shears and glue. Humphrey is setting up for one of her annual valentine-making workshops. Four people, including myself, are scheduled to attend.

"I think it's nice to celebrate Valentine's Day," Humphrey explains. "It doesn't mean it's this sort of romantic image or notion, but more that it's a chance to say, 'I love you,' or to show gratitude to friends or family."

Humphrey shows her appreciation by sending valentine cards to more than 100 friends and family members each year.

Along with that massive mailing, the holiday provides an impetus to take care of her business. "I have [Sweet Basil Cards] in a lot of stores," she says, "and it's a chance to check in with that, or people that support other endeavors I'm doing."

Those endeavors include Helping and Nurturing Diverse Seniors, or HANDS, the nonprofit Humphrey founded to provide meals to older Vermonters. In March, she'll put on the fifth annual "A Show of HANDS" exhibit and silent auction at Penny Cluse Café to benefit the organization.

Soon, the other workshop attendees appear. In light of the current political climate, Humphrey declares that politics are off the table for the evening.

Tonight's other card makers are Stephen Pilcher, a retired computer engineer; Shaun Parker, who runs a home childcare operation in the Old North End; and Sarah Rosedahl, a North Hero artist and illustrator.

After we make introductions, Humphrey dives into the workshop with a loose tutorial. Step one: Determine the recipient of your card. (Or don't.) Step two: Decide what size your card will be. Third: Pick out a color palette — it doesn't have to be pink! And last: Remember to work in layers and add dimension with elements that pop out or hang off the edges of the card.

Humphrey also sweetly demands that we partake of the cheese, crackers, olives and cookies she has set out.

As we begin to busy ourselves selecting papers and trimmings, Humphrey asks each of us who will receive our card. I choose a friend in Germany. Pilcher's is for his wife. Rosedahl says she wants to make a few cards for members of the Québec City mosque targeted by a shooter late last month.

All of us are content to work quietly, but Humphrey keeps the mood light with encouraging anecdotes. She also volunteers to help anyone who might be nervous about wielding the glue gun.

"There's a lot of recycled stuff in here," she points out, sifting through a bin of bits and bobs. She pulls out a tiny, frayed scrap of gold ribbon. "See! This is so great!" she exclaims. Pilcher suggests I use it as hair for the kindly monster I'm drawing. I briefly violate Humphrey's ban on politics when I tell him it's too close to the hair color of the president.

Most of the valentines are variations on the same theme: sweetly colored cards studded with a medley of lace scraps, ribbons and glitter. "There's never enough glitter!" Humphrey asserts. That seems to be the consensus around the table.

By the end of the evening, everyone's hands are covered in glue and sparkles. Small piles of cards dot the table. Rosedahl has made three — pink, purple and peach notes spangled with sequins and a light dusting of translucent glitter. She says she plans to send the valentines to the mosque the following week and hopes to have added a few more.

As we bundle up to leave, Humphrey informs us that she's conducting an "experiment in giving" outside the Integrated Arts Academy for Valentine's Day. On the eve of the holiday — Monday, February 13 — she's encouraging people to show up with hats, gloves, scarves and valentines to hang on clotheslines across from the school on Archibald Street. Students and their parents can take them for free. Humphrey is calling the project "ONE Heart." For this artist, it's all about spreading the love.