Standup comedy is fully blossoming in Vermont, as more and more local comedians hit area stages to tickle our funny bones. While the rise in quantity and quality has been a pleasant development, standup’s unpredictable, wild-eyed cousin — improv — has yet to make any real inroads in the state, despite its popularity nationwide. Burlington performing arts studio Spark Arts may be about to change that, with a new series of improv classes and workshops.

On a recent Wednesday evening, a Seven Days reporter drops by the Flynn Avenue studio owned by local comedians Nathan Hartswick and Natalie Miller to observe a drop-in improv session. The weekly gatherings are free and open to any interested parties, whether as performers or just flies on the wall. Spark Arts also offers a six-week paid improv class and has a touring improv troupe.

On this night, 12 wannabe improv artists crowd the small, bright studio space. Most are young and male, but the ages range to mid-forties.

After a series of warm-up exercises, Spark Arts’ improv instructor Sarah Venuti Yates leads the group through a variety of improv games designed to give some loose structure to the scenes that will follow. Unlike standup, improv comedy is not scripted. As its name implies, it is concocted completely on the spot.

Actors are given parameters within which to create a scene. From there, the action can go in any direction imaginable, with results ranging from hilarity to absolute train wreck. Not even the actors never really know where a scene will take them, which gives the art form a sense of danger and intrigue.

“With standup, you sort of know what to expect,” says Yates, who has been performing improv since high school and studied at improv theaters such as Second City in Chicago and Upright Citizens Brigade in Los Angeles. “Maybe you can see a punch line coming or understand how a joke is being set up. But with improv, it’s all coming out of nowhere. There is always an element of surprise.”

Though performers are essentially acting — and, most importantly, reacting — on the fly, improv comedy does have certain guiding principles. While you can’t teach someone to be funny, Yates says there are ways to open an actor’s receptors to what’s funny around them.

“The most important thing is to listen,” she says. “Oftentimes you can tell when someone has a line they’re waiting to use. And, more often than not, those lines fall flat because the actor isn’t paying attention to what’s happening around them.” She adds that lone wolves rarely succeed at improv. “It really is a team effort.”

One of the fundamental principles of improv is known as “Yes, and …” In short, that means actors should accept the scenario around them, however bizarre, and then find a way to add to it.

“You never want to close off a scene,” Yates explains. “The more you can keep a scene open and the more you can add to it, the more fun, and funnier, the games will be.”

Tonight the games include a cheeky exercise in pickup artistry; a scene in which actors take turns ad-libbing on well-known fairy tales; and “Scenes from a Bowl,” in which they are required to pull random, prewritten sentences — such as “That’s amazeballs!” — from a bowl and incorporate them into the scene. Actors range in ability from hesitant first-timers to experienced improv performers. Yates says that’s typical of the drop-in sessions.

Lisa Steele, a Burlington resident and a self-described homebody, has just attended her first session.

“I was looking for some way to get out of the house and do something fun,” she says. “And this was fun.”

Steele says she was surprised by the variety of talent at the sessions, and when she observed that even less-experienced actors have their moments.

“Even the people who were fumbling were still funny,” she says. “It didn’t matter what level of ability you had.”

Yates agrees. “My favorite thing about improv is that you can’t go wrong,” she says. “No matter what you say or do, it’s right. It’s not scripted. You can’t mess up.” 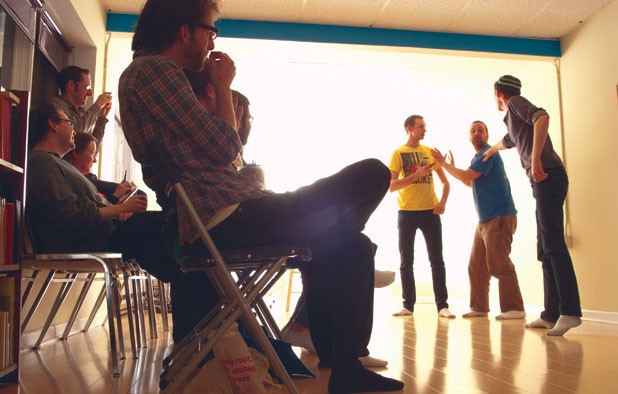