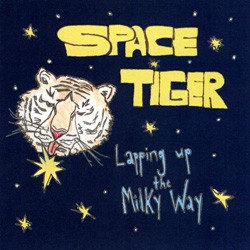 When I was 9 years old, I was playing my first year of Little League baseball. I finished the season with exactly zero hits and considerably more dropped balls than caught ones out in right field. That’s a summer of my youth I’ll never get back. So it is with no small degree of jealousy that I report 9-year-old Aidan Patterson Deutsch is making far better use of his childhood than I did.

At an age when most kids are still making an unholy racket on a Fisher-Price “My First Piano” with rainbow-colored keys, Aidan is singing, writing the songs, and playing electric mandolin for a local band called Space Tiger. And the kid knows how to rock. To be fair, he is assisted by bona fide grown-ups Chris Kiper (ex-Manifest Nextome, Cccome?) on drums and his dad, Mike “Meistah” Deutsch (ex-Black Sea Quartet) on bass. But the band’s debut, Lapping Up the Milky Way, is all Aidan’s show.

In a Black Sabbath-esque move, the album opens with “Space Tiger.” The instrumental is a rocking first cut, with young Aidan busting out seriously huge riffs on his mandolin. The kid steps up to the mike on the second track, “Monkey Monkey,” a tune that bizarrely sounds a bit like Japanese pop-rock band Polysics. Here Aidan pleads with the monkey in question to “stop throwing the banana peels / stop throwing the coconuts” over music that alternates between snappy punk and sonically massive arena rock all without a conventional guitar in sight.

The lyrics are a bit silly, to be sure. If you’re looking for intricate, Dylan-style poetry, don’t look here . . . yet. But if you’re sick of songwriters trotting out the same platitudes about love and politics that have been rock staples for 45 years, a 9-year-old’s unpretentious tales of angry monkeys and hungry trolls might come as a welcome change of pace.

Perhaps the best compliment I can pay to Space Tiger is that I’ve had “Genghis Menray” stuck in my head for two days straight. I never would have guessed that “Who conquered the fish? Who was it? / Genghis Menray!” could ever work as a catchy refrain. Yet on every pass, it brings a smile to my face.

And that’s something that I can’t say about most musicians three or four times Aidan’s age.