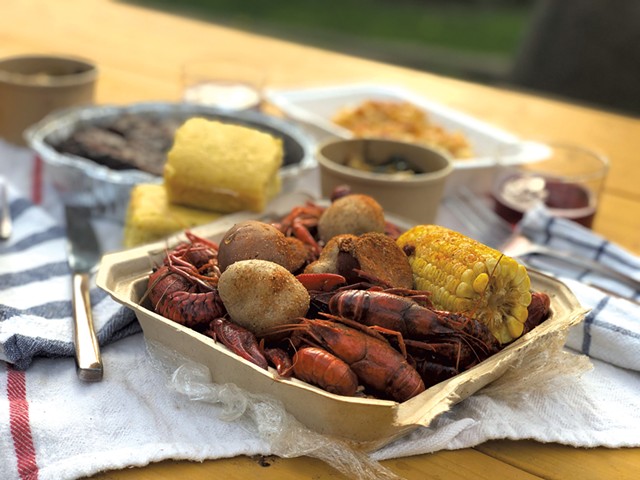 "First of all, don't fear." That was Brian Stefan's solid — if easier-said-than-done — advice for tackling the takeout box full of tiny, alien-like crustaceans I picked up on a recent Saturday evening. Diving into a pound of crawfish is a sloppy, visceral experience. And for those of us who didn't grow up in Louisiana eating mudbugs from a young age, it's easy to hesitate — especially if you don't like your food to look at you.

"Just separate the head and the tail, then suck the juice out of the head," Stefan, chef/owner of Southern Smoke Cajun & Caribbean BBQ, said nonchalantly. After a pause, he chuckled and added, "That's usually where I lose people."

On May 17, Stefan's food truck business will celebrate its 10th anniversary. For about a year, Stefan, 39, has been slinging weekly to-go dinners from the truck's home base and prep kitchen next to the original Four Quarters Brewing location on West Canal Street in Winooski.

In the past, Stefan had collaborated with the brewery to host a few dinners — they'd spread the heaping piles of crawfish, potatoes, andouille sausage and corn onto barrels and tables, letting people dive right in. When the food truck's usual slate of catering events began canceling last spring, Stefan realized the meal would work for takeout. He offered it most weekends through the middle of the summer.

In mid-April, I caught Southern Smoke's second crawfish boil of 2021. Crawfish season is March to July, Stefan explained. Once the yearly supply of the freshwater crustaceans is big enough for companies to begin shipping, he has them flown up from Louisiana.

When the live crawfish arrive, he sets to work washing and picking through the "field run," which includes sizes from tiny to langoustine to small lobsterlike. He prefers this to ordering only the preselected, perfect ones.

"I kind of enjoy that part," Stefan said. "I sit down on my bucket and play music and pick through my crawfish."

Stefan learned the process in New Orleans, training at restaurants on frequent trips to visit friends. One of those restaurants, the Three Legged Dog Tavern, is really more of a dive bar with a crawfish night, he said. "It's like the Olde Northender [Pub, in Burlington]. The guy always let me hang out and help because he didn't want to do all the work of picking through the crawfish."

Southern Smoke's version is a fairly traditional take on the Louisiana staple: crawfish, potatoes, housemade andouille sausage and corn on the cob. A full meal with caramelized onion and tomato mac and cheese, braised greens, and a big hunk of cornbread, made with Nitty Gritty Grain's cornmeal, was $21. Stefan boils the potatoes and crawfish together in the brine, separating them after cooking to make sure each serving gets an even mix.

The process of eating crawfish can be intimidating to newcomers, Stefan said, but New Englanders tend to understand it. "They're used to eating lobster and hacking into a giant, cockroachy-looking sea creature," he explained. "That can be very otherworldly for some."

Once you jump that hurdle, it's a lot of fun. After watching a series of YouTube videos, I decided on a pinch-and-twist method that mostly worked. Thankfully, there were at least 30 crawfish in the roughly one-pound serving, so I had room for user error. After easing in and just eating the tails of a few (with a big glass of wine), I took Stefan's advice and went for the head. The brine concentrates there, creating a spicy, soupy juice that explodes with flavor.

"It's the best lobster-bisque-type, seafood-chowdery thing you've ever had," Stefan said. "And the head is like a little shot glass. Give it a squeeze, and it's an injection of awesome."

I imagined seafood-flavored Gushers as the juice hit the back of my throat. After a few, I picked up on Stefan's note that each one tastes different: some more buttery, some mineral-y, others spicy.

I meticulously peeled the tails, separating the shell from the shrimplike meat. Later, Stefan told me that the tried-and-true New England approach of squeezing the meat out — like one can do with lobster legs — also works on crawfish tails, making the meat easier to extract.

Either way, it's a sloppy endeavor. And in addition to the crawfish, I'd also ordered ribs. In both cases, I was happy to be eating the meals in the privacy of my backyard, where no one could see what a mess I was making — a true benefit of the takeout era.

The ribs are a Southern Smoke staple, served with the same sides as the crawfish boil for $18. The slow-smoked pork, which came from regional farms via Black River Produce, was slathered in a classic barbecue sauce. Stefan described it as the "spicy marinara-style sauce they refer to as 'Creole sauce' in culinary school." He simmers onions, green peppers, celery and chiles, then blends in molasses rather than ketchup.

One benefit of offering these weekly preordered, takeout-style dinners has been that customers are buying more full meals, Stefan said. When the Southern Smoke trailer is at events, it can be difficult to predict whether people will order sides, and they tend to opt for just a sandwich. "This way, I get to serve a vegetable," he said with a laugh.

In January 2021, Stefan used part of Southern Smoke's pandemic-relief funding to purchase a used minibus. Now that the weather is warm enough for paint to stick, he's turning it into a functional food truck. So far he's gutted and painted the inside and paneled the blue exterior with slats of reclaimed pallet wood.

The new truck's menu will feature the sauces, along with housemade sausage and other local ingredients. "More riffs on food that's from the North," Stefan explained. "Southern Smoke was about coming to Vermont with something different. This is taking food that's from Vermont and sharing it."

Adding Maple & Smoke's bus will essentially double the business' presence and ability to cater events, especially during the busy late-summer season. Based on Stefan's calculations, the weather is nice enough for people to eat outside about 26 weeks of the year. Of those weeks, Friday and Saturday are the busiest days; that boils down to a food truck season of 40 to 50 days, weather permitting.

Southern Smoke will stick to what it's known for: fried chicken sandwiches, ribs and other Southern specialties. Stefan expects to continue the weekly takeout dinners on West Canal Street, too. When it's warm enough, he'll cook out of the trailer, adding fried chicken and other specials to the takeout menu.

Stefan still hopes to open a small brick-and-mortar restaurant someday. Maybe even soon, if the right situation presented itself, he said. But for now, adding a second truck was a more sustainable move for both his finances and his time. Stefan and his wife adopted their now 1-year-old son right before the pandemic began, and he's been soaking up their time at home together.

"I've been watching a lot of 'Sesame Street,' and Cookie Monster has a food truck," Stefan said with a laugh. "When I saw the bus on Craigslist, I was like, 'You know what? We can wait for these other things, which are completely new, or we can expand on what's already in our wheelhouse.'"