In Nando Jaramillo's native Colombia, round cornmeal cakes called arepas are a daily staple. But he took them for granted until the year he turned 20.

Now 57 and living in South Royalton, Jaramillo recalled the long-ago winter when his attitude shifted. He was staying with friends in a small mountain town southwest of Medellín, Colombia, overlooking the Cauca River.

"I ended up on this farm where this lady, Eulogia, she would make all the food for the people that worked there," Jaramillo recalled. Every day started with an arepa made from freshly ground corn masa, hot off the griddle, spread with butter and sprinkled with fresh homemade cheese.

"I saw the whole process: how she made the corn into all these different masas; how she made the empanadas, the arepas and tamales for the Christmas season," he said. "That's what I fell in love with. I would wake up every day to work with her."

"We're eating better arepas here in Vermont than in a lot of places in Colombia." Nando Jaramillo tweet this

Today, Jaramillo produces his own Moon and Stars arepas in Burlington out of freshly ground, regionally grown corn. They are sold through about 10 co-ops and farmstands, mostly in the Upper Valley, and recently landed a 2022 Good Food Award.

But Jaramillo's vision goes beyond offering a traditional Colombian food in Vermont. Moon and Stars brings together the centuries-old culinary staple of his homeland with the mission-driven energy prevalent in his current home state. He is working to expand sustainable farming of heirloom corn varieties and to educate the community about the cultural and environmental value of safeguarding seed diversity.

"This is to create a market for this type of corn, an alternative to all that GMO corn," Jaramillo said, referring to genetically modified varieties. "We have to create this model that brings back ethics to the way that we grow our food."

Moon and Stars was seeded by Jaramillo's experience in the mountains of Colombia, but it was spurred into action by an unexpected conversation in a desert of the American West.

In 2006, Jaramillo was living in Miami and working in production design and construction for the commercial film industry. A friend invited him to Burning Man, the epic outdoor cultural event that draws tens of thousands annually to Black Rock Desert in Nevada.

Jaramillo recalled meeting a young man who asked where he was from. "I told him I was Colombian, and we started this really deep conversation. He told me about this project in Colombia called Gaviotas: this permaculture reforestation project."

When Jaramillo returned to Miami, he started doing research. "It just guided me to learn about the damage that the agricultural system is doing to our planet and the water sources and how we can remediate that," he said. "I've been on that path since."

It took Jaramillo more than a decade to move to Vermont, but his winding path brought him to the state briefly before that. He had decided to visit and learn from environmental and agricultural sustainability projects around the U.S. So he sold his car and other possessions to buy a bus to retrofit to run on vegetable oil.

Coincidentally, he recounted with a chuckle, the cheapest option he found online was an old Monkton school bus, which he picked up on a day trip from a friend's place in Connecticut.

A few years later, back in Miami, Jaramillo started a small, organic farm on a couple of acres just outside of the city in the middle of what he called "this big, industrial agricultural thing." His then-wife dubbed it Moon and Stars to match their biodynamic approach, which uses planting and cultivation practices "guided by the moon and stars," Jaramillo explained.

Jaramillo operated a small CSA and made empanadas that he sold at a local farmers market. He tried to grow corn, but it was impossible where he was farming due to pest pressure, he said. The surrounding farms used so many pesticides, Jaramillo said, "All the bugs would come to the oasis of our farm."

By 2017, Jaramillo and his family were ready to leave Miami, and he found a job on a farm in Randolph. In Vermont, he saw an opportunity to realize his dream of revitalizing organic heirloom corn.

The project seemed increasingly urgent to him. Back in Colombia, things had changed radically since 20-year-old Jaramillo watched Eulogia make arepas from scratch with regionally grown corn that she first simmered with wood ash in the ancient method known as nixtamalization and then ground fresh to make masa dough.

That process has been largely usurped by the use of mass-produced, imported, commodity cornmeal. "If you were born after the '90s, you never tried a real arepa," Jaramillo said. "I wanted to make an arepa out of true corn."

Vermont's embattled dairy farmers "have all this infrastructure to grow all this corn," he noted. "What if you give them a way to diversify ... into heirloom corn and create an industry based on the basic needs of Latin American cultures?"

With a small grant he received in 2018, Jaramillo pulled out his old Miami farmers market cart and began to attend events and do outreach with food and information. He aimed to share his cultural traditions in support of regenerative farming. "Regenerative means putting all these practices together: ethical agriculture, tradition, the community," he explained.

By 2020, Jaramillo had scaled up and partnered with All Souls Tortilleria to make batches of arepas in its gluten-free corn production facility in Burlington. Last year, he moved his home and his Moon and Stars nonprofit into an historic building in South Royalton. With the support of the building's owners, he plans to start his own corn processing and production facility and host community events and workshops there. 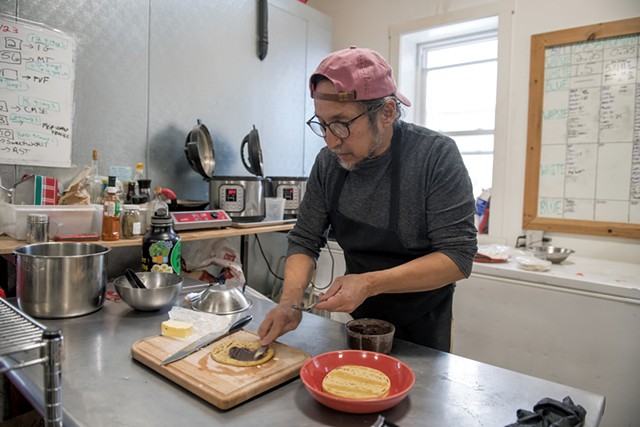 On the afternoon of March 1, Jaramillo was making arepas at All Souls. He fed fresh masa made with regionally grown Wapsie Valley corn into the machine. Within 30 minutes, around 600 thick, golden arepas flecked with dark toasty spots had tumbled out onto cooling racks.

The air smelled of popcorn, grilled Mexican-style street corn and the roasted chestnut carts that spring up on New York City corners every winter. Jaramillo heated up a skillet and toasted a few arepas on both sides before buttering them and sprinkling them with shredded cheddar. A bite brought those same deep, roasted corn aromas to the tongue with additional layers of crisp and chewy texture.

The Good Food Foundation judges were particularly impressed by the aroma, too, wrote the foundation's spokesperson, Laura Kirkland, by email. The judges' tasting notes also mentioned that "the arepas warmed nicely and held a nice soft center with a firmer, crisp outer crust," she said.

The Moon and Stars arepas look essentially like quadruple-thick yellow corn tortillas. Their heft means that you can really taste the corn in each bite. "Almost more than a tortilla," said Sam Fuller, co-owner of All Souls, "they are a great way to express the distinct flavor and texture of these heirloom corn varieties."

The rustic, substantial arepas are clearly appealing, but they could also confound someone who's used to softer, blander arepas made with commercial masa flour.

"There is this disconnect, because people have accustomed themselves to that flavor," Jaramillo said. "They have probably never had this type of corn, so it feels different for them. This tastes like real corn.

"We're eating better arepas here in Vermont than in a lot of places in Colombia," he continued, "because it's good corn, and it's grown in a decent way."

In addition to working closely with the All Souls team, Jaramillo has built a key partnership with Cedar Circle Farm and Education Center in East Thetford. This will be the third season he cultivates heirloom corn on the farm in a low-till approach integrating corn, squash and dry beans. Jaramillo also participates in the farm's camp and public workshop programs.

"Nando's really passionate about sharing his knowledge," said Shawn Grenier, Cedar Circle's research and soil conservation lead, who works closely with him. "Like us, he wants to help people cook more real food again. He wants to grow the local food community and to help the planet through regenerative agriculture."

In addition to the plots at Cedar Circle, Jaramillo is growing a Mexican heirloom corn called zapalote chico for seed in Orange County at two sites with minimal risk of contamination from GMO corn.

He's also been trying to source some varieties from Colombia, like the ones that Eulogia, the farm cook, might have used. He has spent the last few years trying to track down two — called cucaracho and sangre de toro — with no luck so far.

This is exactly Jaramillo's fear: that the ancient, traditional corn varieties will be lost forever, swallowed up by the generic and the bland. "It's just really, really hard," he said with a sigh.

The original print version of this article was headlined "Marvelous Maize"