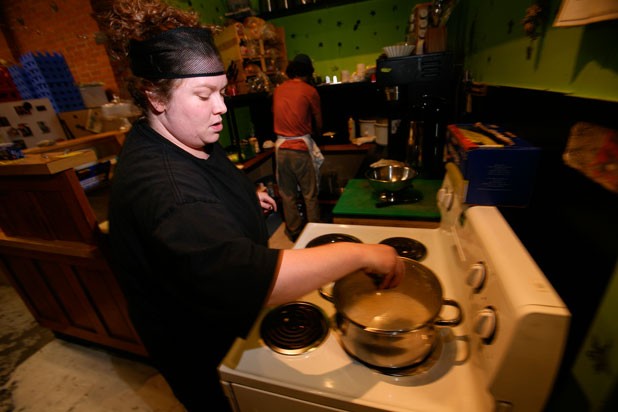 “Dinner theater” may conjure up somewhat cheesy visions of geezers at a creaky production of Pippin in Vegas or suburban New Jersey. But Burlington restaurateurs Chantal and Lia Beliveau have a hipper vision for blending food and entertainment at the South End’s Outer Space Café. This weekend and next, a corner of the eatery becomes a cozy stage for an audience of 50 as the Green Candle Theater Company premieres Michael Jordan Evans’ play Art the Father. Come early for the Friday-night shows to chow down on a hearty pre-performance buffet.

The popular breakfast and lunch spot shares its home on Flynn Avenue with the well-established Flynndog art gallery and a number of local businesses. The South End, of course, is also a bustling residential area. Chantal Beliveau’s original inspiration for hosting evening events was getting the neighbors to attend, she says. With a lack of after-dark entertainment options within walking distance, she fears there are “so many people that live right here in this community that probably never talk to each other. Giving them a space where they could actually meet and chat and hang out . . . that was my original goal.”

This past summer, Beliveau started with dinner and a show on Wednesdays after the weekly on-site farmers’ market. The café featured bands, poetry readings and films, but the theatrical events were the “best attended and most electric,” she explains.

Growing the venue will be a challenge, Beliveau admits. “People are very excited about using this space and having something in this area,” she notes. In particular, she cites the good acoustics, as well as the versatility and intimacy of the space. “But getting them out when it’s pitch-dark and freezing cold isn’t going to be easy. So, for the wintertime, we thought we would do big events,” focusing on longer runs of plays with a few holiday-linked special programs.

Director Evans agrees that trying to draw audiences to a new location represents a gamble. “Creating a theater space that’s off Church Street — and this is way off Church Street, in an area where people don’t think about theater — is risky,” he explains. “This is a very viable theater space,” he stresses, and one that fits well with his aesthetic. “I like the feel of the space,” Evans reflects. “It’s a little rough, but not too rough . . . I really like rough spaces and then creating something out of them.”

The architectural details left over from the building’s industrial past — it was once a chocolate factory — contribute character that is inherently lacking in black-box venues. The high ceilings lend an airy feel. Steel I-beams provide solid places to hang lights.

Both Beliveau and Evans seem committed to making the Outer Space work as a place for theater. “Like anything else, it’s going to take some time to develop,” Evans realizes. For him, staging Art the Father — a play about family reconciliation — is now “an act of love,” he explains. He originally wrote the play 10 years ago, when his dad asked him to pen something for a family reunion.

Evans’ father currently has dementia, and Evans wants to mount a full staging while his dad can still travel from Delaware to attend. “He has no short-term memory,” the director explains. “He’ll forget that he saw it. But I can remind him, and he’ll remember. While he’s watching it, he might not follow everything. But he’ll know that this is a play written for him, by his son, and it’s dedicated to him.” For this production, Evans is focusing on an audience of one.