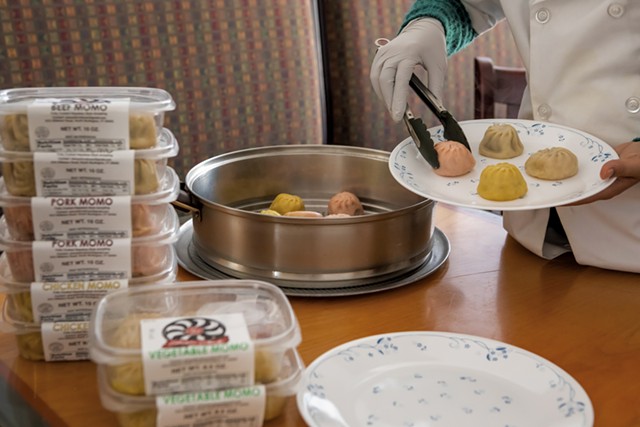 Six years have passed since the first summer the Sherpa family sold momos at the Burlington Farmers Market. Early on, Nurbu Sherpa spent a lot of time explaining the traditional Nepali dumplings to curious customers.

"I remember that part clearly," his wife, Phura Sherpa, said. While she and her mother-in-law, Radha Sherpa, steamed the hand-crimped beef or vegetable dumplings, Nurbu patiently answered the same questions over and over: "What is [a] momo? What is momo sauce?" Phura recalled.

Nurbu still has the response down pat.

"Momos are kind of like Polish pierogis or like samosas," he explained recently at Sherpa Foods' South Burlington production facility. "They have different fillings inside with the flour wrap on the outside, and they can be steamed or fried. You eat that with our own tomato-based momo sauce, which is similar in style to hot sauce."

In 2015, the Sherpas were making 150 to 200 momos weekly in a tiny rented kitchen in Burlington. They have since scaled up: first into a commercial kitchen they built in their South Burlington home and then, in early 2020, into their current 1,600-square-foot space on Williston Road. By that point, they had also invested in specialized mixing, filling and dumpling-wrapping equipment.

"I used to get a lot of sore arms," Phura said. "Even my mom-in-law would [get sore] from rolling all the dough," she added — nodding at Radha, who smiled from behind a festive reindeer-themed face covering.

The family now works with three employees to produce 8,000 to 10,000 momos a week. They also make jarred momo sauces, vegan chow mein and fried rice, selling their products through retailers all over Vermont, plus two in New Hampshire.

"In Kathmandu there are more momo shops than Starbucks and McDonald's, combined, in New York City." Nurbu Sherpa tweet this

The year 2020 presented a serious test for the Sherpas, as for many food businesses. But, having made it through the worst of the pandemic, they're ready to ascend to the next level.

On March 17 of this year, Sherpa Foods became the first food processing plant in the state to receive approval to participate in the Cooperative Interstate Shipment Program. That means Sherpa Foods will be able to ship its products across state lines without the federal inspection normally required of meat and poultry processors. The exception is possible, in part, because Vermont's state inspections for meat processing follow the same guidelines as those of the U.S. Department of Agriculture.

To rise to that opportunity, the company is on the move again. By mid-April, Sherpa Foods will relocate to 1303 Williston Road. The 5,000-square-foot space, occupied most recently by Tian Fu Buffet, will enable the business to expand production significantly. The family also plans to open a small counter-service restaurant called Himalayan D'Lite. (See "Side Dishes.") 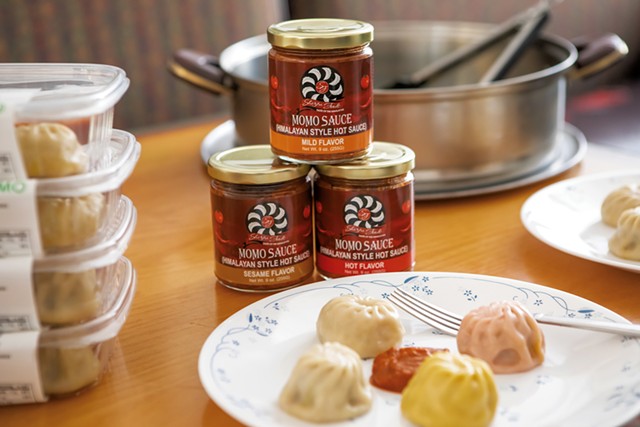 Julie Boisvert, meat program section chief at the Vermont Agency of Agriculture, Food and Markets, has worked with the Sherpas since their start. "I'll never forget the first day I met Nurbu and his mom," Boisvert recalled. "She was the one making the momos because it was part of the family tradition. It was all done by hand."

Nurbu and Phura grew up in the Sherpa community of Kathmandu, Nepal. He and his parents immigrated to the U.S. in 1996, when he was a teenager. Phura arrived in 2011 after the two were married in Nepal.

Like many Himalayan Sherpa, the couple's families worked in trekking and tourism. Nurbu is careful to explain that the term "sherpa" has been incorrectly used to refer to the job of mountain guide. "Sherpa is not an occupation. It's an ethnic group. It's our community," he said.

Nurbu studied management at the University of Texas at Arlington and landed a job at Macy's in New York City. He started in men's shoes, "which was perfect for me because I'm a man and I wear shoes," he joked. "Then I was promoted over to women's lingerie, and I had a lot of learning to do."

He worked his way up the ladder, building skills in marketing, merchandising, customer service, purchasing and sales that he said prepared him for entrepreneurship. "I would say [it gave me] the kind of confidence to speak with stores and understand what they require," he said.

Phura, who has a degree in travel management, was working for John F. Kennedy International Airport when she became pregnant in 2013. Nurbu's parents had moved from Queens to Vermont, and the couple knew they wanted to be closer to family. "We're asking them if they wanted to move back to New York, and they were like, 'Why don't you come up to Vermont?'" Nurbu recalled with a laugh.

The couple had enjoyed camping and skiing in Vermont, and Nurbu thought it might be the place to pursue a long-held dream of starting his own business. On his next visit, he saw his opportunity.

"In New York City, you walk down a block, there's like 10 different restaurants from 10 different ethnicities," he said. In Vermont, offerings were far more limited. The restaurant business didn't appeal to him, but filling a prepared-foods niche seemed promising.

Looking back, Nurbu acknowledged that he had no idea what the family was in for.

Deciding what to make was the easy part. Momos are "the unofficial national food of Nepal," Nurbu said. "There's a joke that in Kathmandu there are more momo shops than Starbucks and McDonald's, combined, in New York City."

Phura and Nurbu shared memories of gathering with friends and family to make momos. Each family has its own method and recipe. The most popular fillings in Nepal are cabbage and ground buffalo, both seasoned with curry powder, turmeric and onion.

"It's kind of like a Thanksgiving meal, because every family makes it their own way," Nurbu said.

The couple and their young son moved in with Nurbu's parents. They soon learned that they would need to secure a production kitchen before they could even apply for a food business license. And, to make meat momos, they'd need to work with the Agency of Agriculture and the Vermont Department of Health.

When they approached banks about loans, Nurbu recalled ruefully, "They were like, 'Come back maybe in three years if you're still in business.'"

The couple found a kitchen and dug into their savings to rent it and start the licensing process. They discovered they needed to write a complicated HACCP (hazard analysis and critical control points) plan that is required for processing many foods, including meat and poultry.

"I just called the Agency of Agriculture and said, 'I'm so sorry, but I have no idea what a HACCP plan is. I'm, like, lost; can you just walk me through what needs to be done?'" Nurbu said.

Randy Quenneville, then the meat program section chief, provided critical support, but nailing down the plan still took a couple of months. "It almost made me cry," Nurbu admitted.

Stress and doubt built. "It was a very painful time," Nurbu said. "We were just hemorrhaging money."

Finally, armed with all the necessary licenses and a day vendor market spot, the Sherpas sold their first momos in 2015. Gradually, they added sales to co-ops and independent grocers. Banks actually started offering them money.

At the beginning of 2020, Sherpa Foods had just finished remodeling and fitting up its current Williston Road facility to the tune of about $100,000. The company had also been named one of eight winners by the national Chobani Incubator program, an honor that came with $15,000 and a three-month training and networking program. Nurbu would have the chance to explain momos to buyers at Whole Foods Market and other national chains.

It was a blow when the pandemic canceled the Chobani program, though the cash helped in the face of plummeting sales. "Our deliveries to stores went from twice or three times a week to barely one," Nurbu said. On top of that, beef became almost impossible to source at a reasonable price, cutting Sherpa's line to one kind of momo.

The Sherpas had to lay off their three employees. With Nurbu's mother stuck in Australia visiting another son, it was up to the couple to juggle running the business and caring for their kindergartner, who was home from school.

For about a month straight, "We used to come [to our facility], like, six, seven in the morning after breakfast and just make whatever we could until, like, eight, nine o'clock at night," Nurbu recalled. "We'd eat dinner here and go home and sleep and then just come right back in the morning. It was exhausting, a very tough time."

Trying to reinvigorate sales, the couple added chicken and pork momos and two vegetarian dishes. Nurbu refocused on explaining and selling momos. "I googled all these stores and co-ops. I started just calling them, calling every day."

His cold calls bore fruit. Over the past six months, Sherpa Foods has added more accounts than it had in the preceding three years, for a total of about 30.

Without the new products and retailers, Nurbu said, "We would be out of business."

In early 2020, Nurbu had been talking with United Natural Foods, a leading wholesale distributor to the natural grocery market. The distributor's regional manager recently called to congratulate the Sherpas on their Cooperative Interstate Shipment Program approval and to restart the plan to sell their products all over the Northeast. If all goes well, Nurbu expects sales to triple over the next year.

"[Nurbu's] got a business mind," said Boisvert of the Agency of Agriculture, who helped the Sherpas apply for the program. "He listens, and he works with you. He takes all the regulatory requirements, and he learns from it. I think that's why he's so successful."