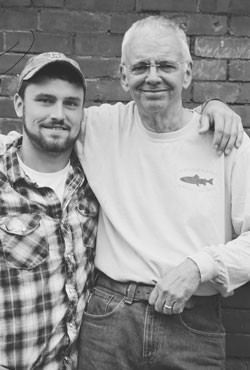 You’d never know from looking at Krista today — dressed casually, in khakis and a cotton shirt — that she used to shoot up heroin every day and weighed just “90 pounds soaking wet.”

The 36-year-old, who now looks more like a soccer mom than a recovering IV drug user, is one of many addicts who frequent the new methadone clinic that just opened two weeks ago in South Burlington. Located in a complex of medical office buildings off Dorset Street, the controversial Chittenden Center is as nondescript as a dentist’s office.

Krista was leaving the clinic last Wednesday with her friend, Sheri, who is also a recovering addict. Both women were there to pick up their buprenorphine, one of several treatments for opiate addiction dispensed there. Also known by the brand name Suboxone, the prescription drug helps addicts fight their cravings and blocks the opiate receptors in the brain.

Krista and Sheri agreed to talk with a reporter as long as their last names weren’t used. They cautioned, however, that standing around outside the center wasn’t a good idea — in fact, it’s against the clinic’s rules. Two plain clothes “environmental counselors,” aka security guards, routinely patrol the building and parking lot to ensure that no problems arise — either from the clinic’s patients or from people who oppose its presence. Over coffee at a nearby Dunkin’ Donuts, Krista and Sheri shared stories that have become all too familiar in Vermont.

“We were the perfect family. We had the house, the cars, the kids, the dog,” said Krista, who lives in the Burlington area. After the birth of her second son, she got her tubes tied. There were complications from the surgery — and the doctor prescribed a large supply of painkillers. Within a year, she and her husband were both hooked.

No one at her son’s public school, where Krista volunteered as a reading and writing tutor, ever suspected she was using. Even her own family didn’t know she had a problem. But, like most addicts, Krista couldn’t maintain that façade for long. Inevitably, the Percocet and Vicodin she was snorting every day weren’t enough to satisfy her cravings. Soon, she was using heroin intravenously.

Though she’d never been in trouble with the law before, Krista picked up four criminal charges within a three-month period and went to jail for nine months. After her release, she was clean “maybe a month” before she started using again, and went back to prison. In the process, she lost her house and cars. Her sons, who were 9 and 2 years old at the time, went to live with their father until he, too, was arrested and went to jail. Eventually, Krista’s marriage crashed and burned.

Krista met Sheri four years ago, when both were starting Suboxone treatment at the University Health Center. Both credit the drug, and each other, for their recoveries. As Sheri put it, “We lean on each other a lot.”

Sheri, 38, said Suboxone probably saved her life. A lifelong epileptic, she realized one day that having both a seizure condition and an IV-drug habit would eventually kill her if she didn’t get clean.

“I’ve woken up many times while using, having just had a seizure,” Sheri recalled. “I’d just look up at people around me and they’re still partying. Nobody cared that I was on the floor having a seizure.”

Both women said they knew people who succumbed to their addictions. Some died because they never tried to quit their habits; others died because they couldn’t get into one of Vermont’s few rehab facilities. Even with the new South Burlington clinic, Bob Bick, the HowardCenter’s director of mental health and substance abuse services, noted that the waiting list for treatment in Chittenden County is still “hovering around 600.”

But adding options for addicts isn’t easy. When the HowardCenter’s new methadone clinic finally opened at 364 Dorset Street, a convoy of opponents drove around the neighborhood honking its horns. Since last year, nearly 700 local residents and business owners have signed an online petition opposing the clinic’s location.

“Please do not misunderstand this petition,” it read. “We strongly believe that South Burlington should have a methadone clinic to help those in need, we just don’t want it 1000 ft. from our middle and high school open-campus.”

Despite such opposition, on January 4, the South Burlington Development Review Board upheld its earlier decision to approve the HowardCenter’s permit request to renovate the building’s interior. The HowardCenter went ahead with the renovations, even though the South Burlington school board filed an appeal in environmental court. A ruling on summary judgment motions filed by each side is expected in the coming weeks. Regardless of the outcome, it’s likely to be appealed to the Vermont Supreme Court.

Krista and Sheri are well aware of the controversy surrounding the clinic where they get treatment. And while they understand resident concerns, they noted that many of the comments posted on the online petition suggest the neighbors are ignorant about the nature of addiction and how pervasive it is in Vermont.

“A lot of people I went to high school with are now addicts, people I never would have guessed,” Krista said of her alma mater, Burlington High School. “It’s very sad. I can think of at least 25. Three of them have died in the last year from overdoses.” Sheri added that, while reading recent news accounts about the mass drug sweeps by the Vermont State Police as part of Operation Northern Lights, she and her boyfriend recognized the names of several people they once knew.

One comment suggested that the methadone clinic will attract “riff-raff” into the neighborhood, resulting in “syringes and all sorts of other garbage being tossed away” where schoolchildren might find them. Another asked why city officials would want to “import a clear and present danger to the families and children who reside in this city?” Still another voiced a sentiment reflected in many other comments: “Kids come before addicts. PERIOD.”

“They’re in denial,” Krista said. “They don’t understand, there’s probably just as much drugs in South Burlington High School as anywhere else.”

“People think it can never happen to them or anybody they know,” Sheri added. “They act like it’s a conscious choice.”

A new documentary by filmmaker Bess O’Brien aims to educate and enlighten viewers about the growing problem of opiate addiction in Vermont. The Hungry Heart follows the efforts of Dr. Fred Holmes, a St. Albans pediatrician who, in October 2006, began devoting much of his practice to treating and counseling young people hooked on prescription pills. Seven Days profiled Holmes in a May 4, 2011, cover story titled “Bitter Pills: A St. Albans pediatrician helps young addicts do the ‘hard homework’ of getting clean.” Holmes retired in June 2013 after 43 years in practice.

“There are those who are worried that you don’t want ‘those kids’ in your waiting room,” Holmes explains in the film from Kingdom County Productions. “They don’t look different, walk different, talk different. They’re just like the others who are our children. It’s just the nature of their disease that’s more difficult and more challenging.”

O’Brien shot the film over an eight-month period beginning in the fall of 2011. In all, she accumulated more than 150 hours of footage from more than two dozen subjects. Much of it was captured in Holmes’ examination rooms while he met with “youngsters,” as he calls them, who were struggling with the vicious cycle of recovery and relapse.

“What was amazing for me as a documentary filmmaker was that I was given unprecedented access into the extremely private world of doctor and patient,” O’Brien explained in an interview last week. “It’s a testimony to how much these kids love and trust Fred.”

Two recovering addicts interviewed outside South Burlington’s new methadone clinic have plans to see the film. Krista and Sheri will likely recognize and identify with many of the themes explored in O’Brien’s film: the drug habits that began as seemingly harmless fun but quickly devolved into unrelenting cravings, the stealing and selling off of material possessions to feed their insatiable habits, the jail time, the heartbreaking loss of children to state custody, the vicious cycle of recovery and repeated relapses, and the death of friends and family members to accidents and overdoses.

“It’s an unhappy kind of medicine to practice,” Holmes explains in the film. “The good stories are glorious but the bad stories drive you bonkers. And the ones who don’t do well rip you up inside.”

You could say Krista and Sheri have had “glorious” outcomes. Both said they’ve been clean for nearly four years and have been reunited with their children. Sheri is now a stay-at-home mom for her 16-year-old daughter, who has special needs. Krista shares an apartment with her two sons, who are now 19 and 13, and is attending college to become a drug treatment counselor.

Both women said their kids know all about their histories of drug abuse. Krista noted that her older son, who saw drugs rip his family apart and send both his parents to jail, regularly attended her group counseling sessions and listened intently to other addicts’ stories.

“For my one-year medallion,” she said, “my son got up and gave it to me. Because I had lost everything.”