Common Roots executive director Carol McQuillen strives to impart many lessons: Eat organic foods, increase everyone's access to them and take good care of the soil. But the lesson on which intern Ziheng Wang is focusing at the moment is decidedly more basic.

The 22-year-old University of Vermont senior slips a round pizza peel under the flatbread baking inches away from the ashy logs in Common Roots' outdoor clay oven at Wheeler Nature Park in South Burlington. He rotates the pie a few degrees, then a few degrees more. His first job, he explains: Make sure it doesn't stick.

There's a lot riding on this flatbread, which Wang is making for Flatbread Friday, a weekly pizza night open to the public here at Common Roots' headquarters. Besides the toppings — farm-raised bok choy, housemade pickled onions, organic mushrooms and broccoli, and optional Asian braised pork — the pizza carries the core of Common Roots' mission: Produce food to nourish and educate.

For 14 years, the South Burlington nonprofit has been doing just that. It grows vegetables and donates thousands of pounds of produce to food shelves, along with seedlings, recipes and nutritional information.

"I don't think of it like a job. It's a purpose. It's a mission." Carol McQuillen tweet this

Education is central to the mission. Gone are desserts from South Burlington school lunchroom trays. Thanks to Common Roots' efforts, salad bars and homemade salad dressings are in. The nonprofit's Farm to School program sends educators to every South Burlington elementary school classroom each month with lessons and food samples. By the time the kids get to middle school, they've had 54 lessons, at no cost to their families or taxpayers.

Common Roots also picks up the tab for Farm to Go, an afterschool cooking class in which students at South Burlington's Frederick H. Tuttle Middle School prepare complete meals to take home for their families.

The organization's internship program will have about 140 participants this year. Students from UVM, Saint Michael's College and Champlain College help farm, teach, promote, ferment, pickle, preserve and, as on this day, cook for Flatbread Friday.

Wang and five other college interns mill about the outdoor kitchen getting ready on this unseasonably chilly April afternoon. Zöe Launer and Paige Kincaid stretch the dough, spiral golden ginger sauce onto it, then add vegetables. Emma Miner and Matthew Sears set up the table where customers will pay and pick up. And Peyton Rooney tucks parbaked flatbreads into pizza boxes as the students talk about learning kitchen skills and creating balanced meals.

Launer and Kincaid were surprised by this week's flatbread toppings — "stuff I would eat, but not together," Kincaid says.

"And I wouldn't put it on a pizza," Launer adds.

Until now. They sample slices. "I love it," Kincaid says.

Wang says he's learned to include proteins, carbs and vegetables in each meal. "And enjoy. Enjoy food," he says — surely endearing himself to McQuillen, who hates the term "grab and go."

"Veggie," Wang announces as he pulls a vegetable flatbread from the oven. The other interns sprinkle it with chopped chives, dot it with fromage blanc sauce and slice it.

"One meat," he announces next, and out comes a braised-pork flatbread. The crust is lightly kissed with black blisters, and the broccoli is toasted like a marshmallow.

For McQuillen, 70, seeing young people appreciate, have access to — and eat! — organic vegetables is a dream come true. Getting here has been a winding road.

McQuillen is not a farmer, though she spent summers on her grandparents' farms. She grew up in Buffalo, N.Y., the fifth of nine children of an ice cream salesman and a homemaker who cooked fresh foods.

"The culture of food and family meals was, like, sacred," McQuillen says. Her family ate in the dining room every night, often with a tablecloth and candles.

After high school, she joined a convent, where she received "phenomenal" training in liturgy, scripture and philosophy, she says. She left after two years, "mostly because I have seven birth sisters. And my seven birth sisters were way more fun than the sisters I was studying with."

She reconnected with Kevin McQuillen, whom she had met at 18. The pair married and had two daughters, and Carol became an elementary school teacher.

She was teaching kindergarten and first grade at Orchard School in South Burlington in 2001 when the seed that would grow into Common Roots was planted. She volunteered at an Earth Charter event at Shelburne Farms. Earth Charter is a global consensus statement on sustainability and the principles of sustainable development.

When McQuillen heard Indian British activist Satish Kumar speak about "care for the soil, the soul and our society," she cried inside, she says: "I knew something happened inside me. I didn't know what it was."

She went back to school wondering what it would take to preserve the roots of the past for the future. "I'm seeing nobody's recycling in schools; nobody's composting; the food we're feeding children is terrible," she recalls. "There's nothing sustainable about how we're teaching children."

McQuillen helped bring recycling and composting to the school district. Still, sausage on a stick, Pop-Tarts and hot chocolate were offered for breakfast, and every lunch came with dessert. One day in 2007, McQuillen walked past the Orchard cafeteria and noticed the label on a package of hot dogs: "Grade D, but edible."

That sealed her conviction. Food had to be her next focus.

She gathered a group of seven — parents, educators, a community advocate and a nurse — who met weekly for a year. They concluded that the school budget could not support the network of education, gardens and farms that they needed to teach about food and its sustainable production, so the nonprofit was born. Its first program — growing produce for South Burlington families facing food insecurity — was up and running before Common Roots was officially a nonprofit.

"It felt like a calling," says McQuillen, who continued to teach while building the organization, "not a 'should' or a[n] 'ought to.' It was like, I need to do this."

McQuillen retired from teaching five years ago and works full time at Common Roots. She has never taken a paycheck. "I don't think of it like a job," she says. "It's a purpose. It's a mission."

It's a model that demonstrates "how community-based agriculture can happen in an urban, suburban setting," says Abbey Willard, the development division director at the Vermont Agency of Agriculture, Food and Markets.

Agency Secretary Anson Tebbetts finds the South Village concept of housing centered around a farm attractive. He and his family moved there last year. He grew up on a dairy and sheep farm in Cabot and doesn't know a lot about growing vegetables, he says. "So I was just intrigued by the whole thing," including the amount of work it entails, he says.

In addition to feeding people who can and cannot afford to shop at the farmstand at South Village, Common Roots cultivates new farmers through its internship program, Tebbetts says: "And they've got a piece of land there that could easily be all in housing lots. And it's not ... It's an active farm. And that little piece of land produces a lot of food."

For its first six years, Common Roots operated its programs with the support of businesses, foundations and individual donors. In its seventh year, McQuillen says, Seventh Generation cofounder Sheila Hollender told her, "We love what you do, but you're giving everything away. This organization is not sustainable."

"And I knew she was right," McQuillen says, "but I had no idea what it meant."

Serendipitously, the pieces of a solution fell into place. McQuillen calls it grace.

"Within a couple of months," she says, "the city council said to our city manager, 'We own this house, the Wheeler house, and it's underutilized.'"

The city gave Common Roots a lease on the brick farmhouse on the city's 140-acre Wheeler Nature Park. Common Roots got rid of the mice and the "nasty carpets" and installed a licensed commercial kitchen, its first step toward sustainability.

In 2019, Jim McCarthy, then executive chef at the Inn at Shelburne Farms, brought in two other volunteer chefs and started cooking to-go meals for Common Roots to sell — its first revenue-generating enterprise. Farm to Fork, a Tuesday night program, is now in its fourth year. That enterprise and three others — Flatbread Fridays, the farmstand at South Village and rentals of the Wheeler Homestead for events — produce 56 percent of Common Roots' revenue.

In-kind and financial support continues to be vital. "We've got lots of partnerships," McQuillen says. "That's what makes this go."

"Normally, I hate Mondays, but this makes Mondays a lot better." Sebastian Fouche tweet this

Three days after that blustery Flatbread Friday, Room 245 at Tuttle Middle School is buzzing. "Normally, I hate Mondays, but this makes Mondays a lot better," seventh grader Sebastian Fouche says. He's one of seven middle schoolers in the six-week Farm to Go program who are chopping, sautéing, browning, mixing and baking. Supervised by college interns and Common Roots sous chef and educator Rebecca Chapdelaine, the kids turn out 10 dozen carrot muffins in the first hour.

"Everything here each week is amazing," seventh grader Levi Duteau says. "It's all healthy and delicious at the same time." 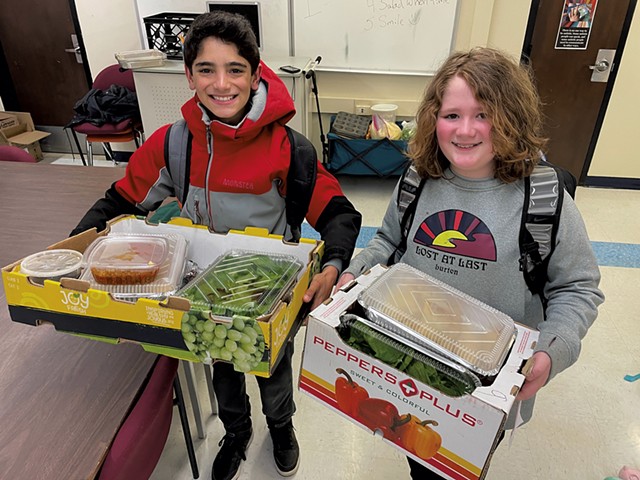 Each student will go home with dinner for their family ("I will eat the broccoli," seventh grader Chase Giroux says), the recipes and a colorful sheet highlighting the health benefits of several of the ingredients.

On past Mondays, Farm to Go students have made naan, cooked spaghetti squash, snacked on corn bread flecked with chia seeds and ground their own cardamom. On this day, to start the sauce for the Mac and Trees, they make a roux.

"I don't know what it is, but it smells good," Sebastian says as he whisks.

When McQuillen looks back at the past 14 years, she counts the disappearance of desserts and the rise of salads on South Burlington school menus among her most satisfying moments.

"Another one was when the three elementary principals during COVID considered Common Roots essential education," she says, meaning that the classes continued during the pandemic. "We did not skip a beat. They wanted us still in their schools. Parents couldn't go in. Other community members couldn't go in. There was no extra anything in the schools...

"But they wanted our lessons."