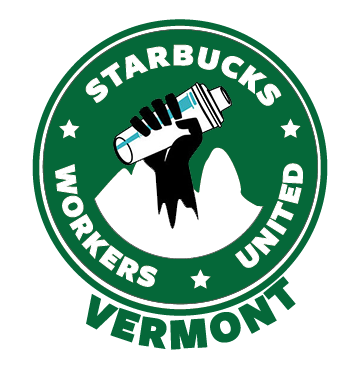 Workers at a Starbucks in South Burlington are seeking to become the first unionized location in Vermont, joining a historic labor uprising within the country's largest coffeeshop chain.

In a letter to the company shared publicly on Sunday, six employees on a union organizing committee said they hope to secure better wages that align with the soaring cost of living in Chittenden County.

"At Starbucks we are treated exceptionally well in many ways," the employees wrote. "However, we are no longer willing to accept working conditions that are only slightly above the exceptionally low bar set by this industry."

Sixteen of the 20 eligible employees who work at the Shelburne Road store in the Gateway Shopping Center have signed authorization cards in support of union representation, according to Campbell Habetz, an employee and organizer. A formal election will likely take place in several weeks.

Habetz, who uses they/them pronouns, said they were inspired to organize by the broader swell of labor activism within the company. A cluster of stores around Buffalo, N.Y., were the first to win union elections in December. In the months since, baristas at more than 200 stores around the country have petitioned for union elections. Over 40 successful votes have taken place, with many more elections pending.

"We're stuck in this constant cycle of turnover, which is exhausting," Habetz said. "We end up with not enough people all of the time."

As the baristas commiserated about working conditions — short staffing, inadequate training and more — Habetz said they realized that many were unaware of the larger Starbucks labor movement.

Habetz's 19-year-old coworker Gaz Romp was among the uninitiated. Romp, who also uses they/them pronouns, moved to the Burlington area from their family's home in Caledonia County earlier this year to take what was described as a full-time position at the store. Romp would earn $15-an-hour as a "partner" — company parlance for a barista.

Romp liked the job, but the promised hours didn't come, and they quickly discovered that finding a room to rent on a Starbucks wage was extremely difficult. Romp has stayed with family and on coworkers' couches for the last couple of months, still unable to find an affordable place of their own. On top of that, the store was understaffed, adding to the stress.

"I'm doing the work of two baristas," Romp said. "I make in an hour the price of two specialty drinks at my store."

The idea of organizing the Shelburne Road store appealed to Romp, whose existing notion of labor unions was that they were "something of the past."

Though wages aren't the employees' sole concern, Habetz and Romp said Starbucks should pay a wage that's in line with the Massachusetts Institute of Technology Living Wage Calculator, which estimates a rate of $19.23 per hour for a single adult in the Burlington area. MIT's model incorporates housing, food and other expenses into its figures.

Starbucks has vigorously opposed the union push and touted recent wage bumps. While the Buffalo-area union drives were underway, the company announced in October 2021 that it would give baristas with two years of service the chance for a 5 percent raise.

"We are listening and learning from the partners in these stores as we always do across the country," a company spokesperson wrote to Seven Days in response to a request for comment. "From the beginning, we’ve been clear in our belief that we are better together as partners, without a union between us, and that conviction has not changed."

But Starbucks has also been accused of illegally retaliating against employee organizers. The National Labor Relations Board sued the company in April, alleging that Starbucks disciplined, suspended and terminated three members of an employee organizing committee. The company has denied the charge.

The food service industry is one of the country's least-unionized business sectors. A recent NPR analysis found that, a decade ago, fewer than 4 percent of new union election petitions came from food service and accommodations industry workers. So far in 2022, the share has increased to more than 27 percent, driven largely by Starbucks, NPR reported.

"We also see ourselves in the context of the larger labor movement that's happening in the U.S.," Habetz said. "We're all really excited and hopeful that real change could be happening."