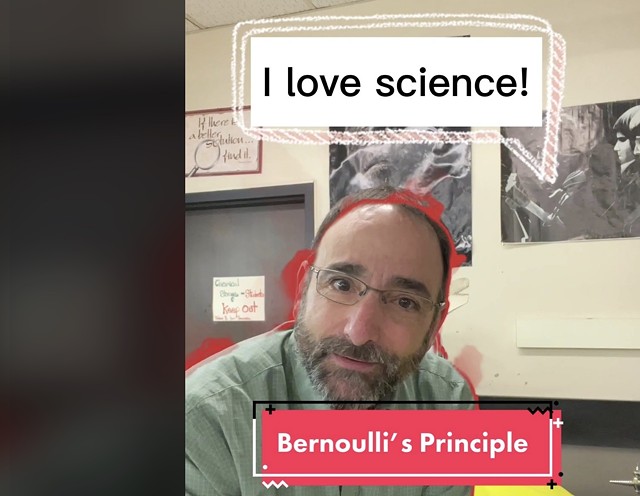 South Burlington middle school teacher Greg Wolf has been doing demonstrations to illustrate scientific principles to his students for more than 30 years. But now, his interactive lessons are getting attention — a lot of attention — outside of his classroom.

Fifteen months ago, the science teacher started a TikTok account under the name Wolf_Science. He’s used it to teach about everything from how siphons work to whether Double Stuf Oreos are really double-stuffed. Along the way, he’s amassed almost 300,000 followers, and three of his videos have been viewed millions of times.

The most recent viral video, which took off last week, shows Wolf illustrating Bernoulli’s Principle — which states that a fluid’s pressure decreases as its velocity increases — by blowing into a long, yellow plastic bag. It’s garnered more than 3.8 million views and has been shared on YouTube’s Daily Dose of Internet and website My ModernMet. Wolf’s other viral videos include an explanation of how big the number 1 million is and a demo of an apparatus called a harmonograph that uses a pendulum to draw geometric images.

Wolf, who is an emergency medical technician in his spare time, began his foray into science-related social media last school year at the urging of his eighth-grade students. When he showed them how to light methane bubbles on fire, they told him he needed to put the demonstration on TikTok, stat.

“At the time, I thought TikTok was truly just for kids dancing and didn’t realize there was academic content on the platform,” Wolf said in an interview with Seven Days. He was surprised to find a large community of teachers on TikTok.

Since then, Wolf has posted about one video a week and connected with educators from across the country. He also shares his videos on his Instagram and YouTube accounts. Wolf has amassed enough followers that he’s now classified as a TikTok “creator,” which means he gets a nominal stipend when his videos go viral. Scientific equipment companies have also showed interest, sending Wolf gadgets he can use in his videos.

In a recent one, Wolf shows how to use a Euler’s Disk, a shiny, spinning toy used to teach about momentum and friction. Flinn Scientific, the company that sent it to him, told Wolf they sold more discs in the days after he posted the video than they had in the previous year.

Though he’s retiring in June after 30 years at Frederick H. Tuttle Middle School, Wolf is hoping to parlay his newfound fame into a second act. Wolf, 55, envisions a part-time job visiting different cities to teach how to incorporate engaging demonstrations into the classroom and spread the message that educators “don’t need to be afraid of science.”

It's gratifying when his videos are shared far and wide, Wolf said, “especially in this day and age when science is denied by oh-so-many people.” But his favorite fans, he said, are former students who reach out to him after seeing their old teacher pop up in their social feed.

Sometimes Wolf’s posts attract naysayers who call them boring or question his scientific reasoning. But most of the comments are as wholesome as Wolf’s content, such as one on his latest video that reads: “Man, I would’ve loved to have you as my science teacher.”