Anti-censorship advocates are hailing a South Burlington elementary school's decision to acquire a children's book that tackles the subject of heroin addiction for its library. The move appears to come in reaction to last week's controversial decision to cancel the author's reading to fourth and fifth graders.

Last week, children's book author Kate Messner, of Plattsburgh, N.Y., was informed that her previously scheduled visit to South Burlington's Chamberlin School had been abruptly called off due to its content. Messner's novel The Seventh Wish, released on June 7, tells the story of how a young girl copes with a family member's heroin addiction.

"I'm shocked. I didn't expect this," said Messner, who's written more than two dozen books for children and teens, none of which has generated controversy. "I'm not that author who writes books that get censored. It's just stunning to me. It's a sad, strange place to be." 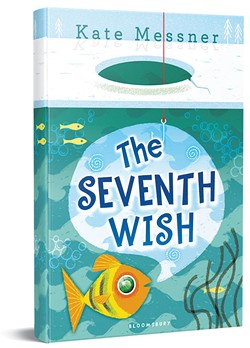 But was Messner a victim of censorship — or of South Burlington educators simply failing to do their homework? The Seventh Wish, which was written for readers ages 9 to 13, uses fantasy and magic to address the subject of the nation's opiate epidemic. Main character Charlie's most fervent wish is for her college-age sister to be cured of her drug dependency.

Inspired by the experiences of one of Messner's neighbors, whose daughter has struggled with substance abuse, the book has received glowing praise for its sensitive handling of a difficult but timely issue. Kirkus Reviews called it "hopeful, empathetic and unusually enlightening."

Messner was approached in January by Chamberlin school librarian Cally Flickinger, who requested the free, publisher-sponsored visit. The publisher, Bloomsbury USA, then sent the school its standard book order form, which includes a letter to be sent home to families. The letter states, "This novel takes an honest but age-appropriate look at the impact our country's heroin crisis has on families."

At about 5 p.m. on the eve of the event, Messner received an email from Flickinger informing her that she'd been "disinvited" from Chamberlin. The reason: Principal Holly Rouelle felt that the presentation might generate questions that staff wouldn't be adequately equipped to answer.

Messner said she was dumbfounded. "I was assured as recently as this week that that letter did go home [to all students' families,]" she said. "But now the principal is saying, 'We didn't have time to talk to families.' So I don't know what's going on."

Messner pointed out that on June 8 she gave an identical presentation at Orchard School, also in the South Burlington School District. That talk was well received, she added, and sparked no controversy.

On June 9, Messner received a follow-up apology from Chamberlin's principal. In it, Rouelle explained that while "there are students in my school who would benefit from a thoughtful conversation with you regarding both the writing process and your research on addiction ... I felt that parents and families needed to be informed, so that they could be prepared for any follow-up conversations that might come up when their child came home.

"The timing was also unfortunate," Rouelle added, "as we are wrapping up the end of the school year tomorrow, giving classroom teachers and staff virtually no time to weave this [into] other curriculum or allowing students the opportunity to have follow-up in their classrooms."

In an email to Seven Days, Rouelle insisted the decision is "in no way an issue of censorship," but simply an error on the school's part. The book order form had been sent home to parents, she wrote, but "I realized that while parents may have glanced at it, when they realized it was an order form, they had probably missed the sentence describing the important topic of heroin addiction in The Seventh Wish."

For at least half the students who were scheduled to hear Messner's talk, the subject of drug addiction shouldn't have been new territory. According to Chamberlin School's online family handbook, all fifth graders receive weekly lessons for one semester in DARE, or the Drug Abuse Resistance Education program, which is taught by the South Burlington Police Department.

This isn't the first time South Burlington's school district has sparked controversy related to the issue of opiate abuse. In 2013, it mounted a legal challenge to the Howard Center's effort to site a new methadone clinic within walking distance of its middle and high school campuses. The district's opposition was ultimately unsuccessful, and the clinic opened that September.

"I'm shocked. I didn't expect this." Kate Messner tweet this

Since blogging about her experience, Messner said, she's received more than 50 emails from librarians, educators, writers and others affected by the opiate epidemic. Most of those messages have been supportive. However, one out-of-state librarian wrote Messner saying that she'd initially ordered copies of The Seventh Wish, only to cancel the order when she learned what the book is about.

"She said, 'We're not going to have a book about heroin addiction in our library,'" Messner quoted the librarian as saying. "And then she said, 'My son doesn't even know what heroin is and he's in fourth grade.'"

Jas Chana, communications director for the National Coalition Against Censorship in New York City, was hesitant to label the incident censorship, noting that the school's decision-making process appeared to be "a bit confused."

"Our concern isn't so much that this was censorship," Chana added, "so much as these decisions are made subjectively rather than following some pedagogic principle."

Messner said the episode has a "lovely silver lining": The South Burlington Community Library has offered to host a makeup event on Tuesday, June 28, at 4 p.m. Authors, teachers and librarians who read about the incident have donated at least 100 copies of The Seventh Wish for the community library to give away to readers. "We believe we'll have enough to give every child who attends a signed copy," Messner said.

And, Messner added, Chamberlin has since informed her of its plans to carry The Seventh Wish in its school library.

The original print version of this article was headlined "Did a South Burlington School Censor a Kids' Book on Addiction — or Just Not Do Its Homework?"