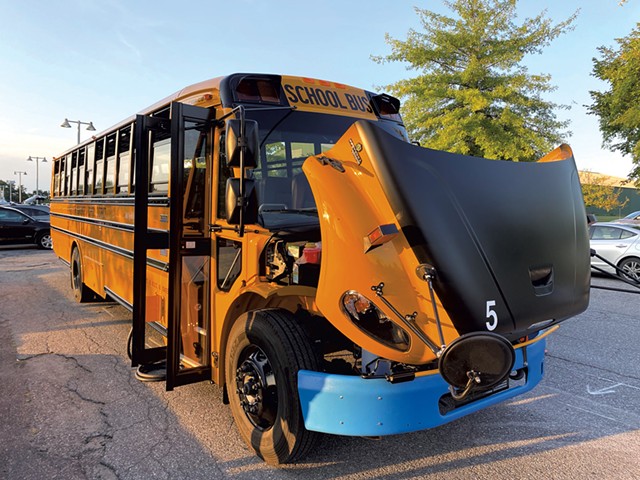 This fall, South Burlington students will be shrinking their carbon footprints just by riding to school, thanks to the addition of four new electric buses to the school district's fleet. Two of the buses will pick up children when school starts, and two more are expected to start rolling shortly afterward.

The fancy new rides are hitting the pavement thanks to a grant from the Vermont Department of Environmental Conservation. The buses typically cost around $300,000 to $375,000 — roughly three times the cost of diesel models.

The buses don't just reduce the district's reliance on fossil fuels. Using innovative vehicle-to-grid chargers, they can also return stored energy to the electric grid when demand is high, such as during heat waves. That translates to carbon emission reductions and lower energy costs for Green Mountain Power customers.

One of the buses was on display last Thursday during SoBu NiteOut, at Veterans Memorial Park. Families toured the vehicle and learned more about the mechanics behind the electric battery and motor. One onlooker, who had recently purchased an electric vehicle for himself, was excited to hear that his daughter — a SoBu student — would also be commuting emissions-free.

McKenzie, who offered the tours, noted that students, too, were very enthusiastic.

"They call it 'the magic school bus,'" he said.