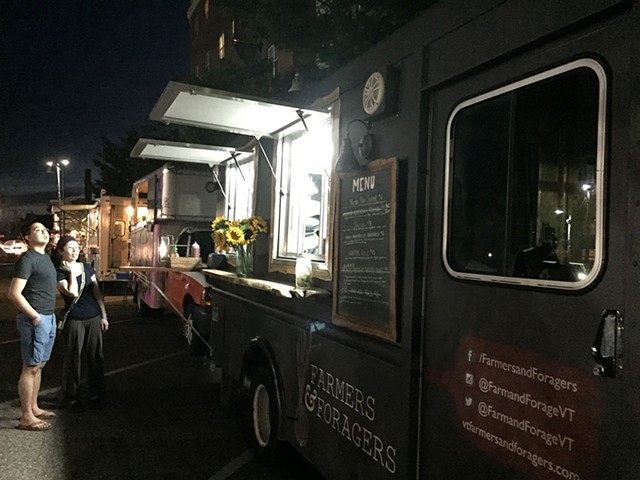 Piggybacking on the success of Burlington Parks & Recreation's Leddy Park Beach Bites, the City of South Burlington is launching a Thursday-night food-truck gathering at Veterans Memorial Park, just south of the Interstate 89 interchange on Dorset Street.

The inaugural Bike & Bites — so named for the event's proximity to the Dorset Street bike path — will take place this Thursday, August 18. It will be the first of three bimonthly get-togethers this season.

"Hopefully this can become a more permanent thing in the future," says Solomon Bayer-Pacht, co-owner of the Farmers & Foragers food truck, who worked with city officials to orchestrate the series.

This Thursday, Gravelin Brothers Band will make use of the park's band shell, while Dave Grippo Funk Band and Phil Abair Band will play on September 1 and 15, respectively.

The events will also feature lawn games and bike parking, courtesy of Local Motion, according to South Burlington Recreation & Parks Department director Maggie Leugers. If the series goes well, she says, it could lead to a summer-long reprise next year.

Either way, Leugers says, "I think you'll see more of these kinds of things happening in South Burlington," given city manager Kevin Dorn's focus on building community and a sense of place in the Queen City's closest suburb. "It's summer and food and wine and music," Leugers adds. "How could you go wrong with something like that?"