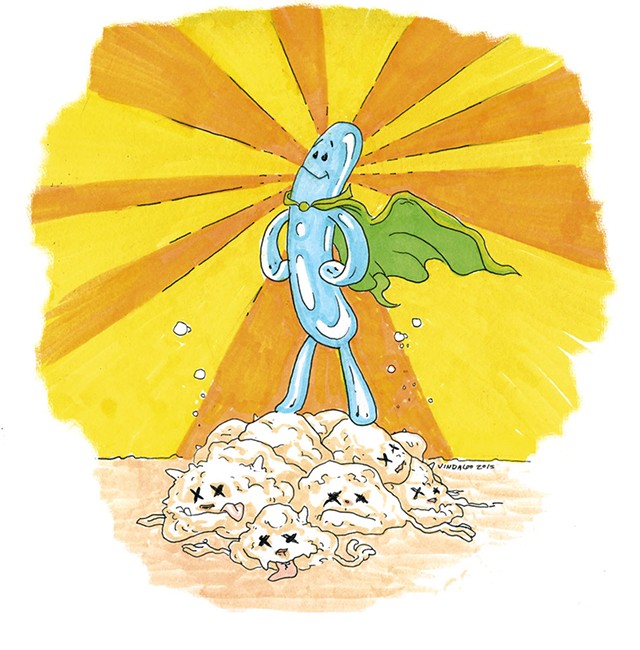 In October 2001 the World Health Organization convened a group of physicians and scientists. Their mission: to lay groundwork that would define and stimulate the study of probiotics, or "friendly" bacteria presumed to aid in digestion and confer untold other health benefits to consumers. The WHO hoped that continued study could prove these benefits so that they could be applied in a variety of settings. In the years since, the medical community has continued to dabble in probiotic research, but many questions remain unanswered.

Yogurt was already a familiar product, but companies began marketing the benefits of its probiotic "live cultures"; physicians began recommending it to patients with gastrointestinal afflictions.

Over the past decade, food entrepreneurs have found — and helped to grow — a robust market for handmade fermented dairy products, vegetables, salsas and condiments, employing natural bacteria to preserve and enhance raw ingredients.

But even as probiotic foods captured the American gut, and scientists became more familiar with trillions of bacteria that comprise the human gastrointestinal microbiome, the benefits of consuming probiotic foods remain mostly vague and unproven.

Many consumers, of course, don't need double-blind studies and statistical analyses to know that friendly bacteria can make for fewer stomachaches and better overall wellness. In this case, believing is literally a matter of trusting one's gut.

Still, for Seven Days' annual Wellness Issue, we set out to disentangle confirmed fact from anecdote about probiotics. 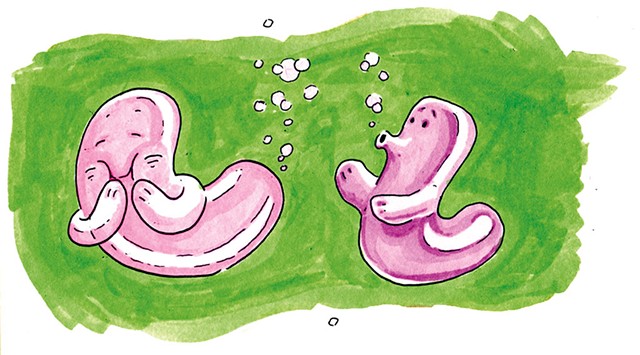 In 2001, the WHO defined probiotics as "live micro-organisms which, when administered in adequate amounts, confer a health benefit on the host." These are species that thrive in the highly acidic environment of the human gut and aid in digestion and promote health in a variety of known and unknown ways. 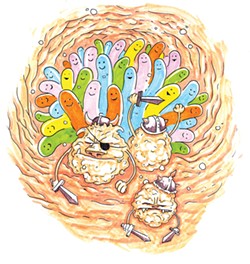 Human intestines are home to untold numbers of individual microorganisms; each gram of intra-colon material contains about 10 trillion microbes, according to University of Vermont nutrition and food science professor Mingruo Guo.

Guo sits on the editorial board of the Journal of Probiotics & Health and has published dozens of works examining the impact of probiotic foods — from yogurt to baby formula — on the human GI tract.

Some of those impacts are known and fairly straightforward. Probiotic microbes thrive on fermenting carbohydrates, sugars and undigestible compounds inside the human intestines. By-products of this fermentation include nutrients such as vitamins B and K2, antimicrobial compounds such as peptide, and organic acids.

Processed by probiotic bacteria, the vitamins become available for absorption into the bloodstream. The antimicrobial compounds and additional acids make the GI tract less hospitable to strains of "bad bacteria," which cause infection or other forms of gastric distress and often thrive in higher pH environments.

Some probiotic bacteria — including strains of L. acidophilus — bind to cholesterol, helping to flush it from the body. And when thriving communities of probiotic bacteria populate large tracts of the colon, they crowd out the unfriendly microbes that might otherwise take up residence there.

While modern science has some understanding of the actions described above, other probiotic behaviors — and their health benefits — are less cut-and-dried. Various studies have explored how bacteria influence metabolism, immune response and hormonal function, and many researchers believe that probiotics' benefits extend far beyond the gut.

In his 2009 book Functional Foods: Principles and Technology, Guo lists some proposed benefits associated with probiotics. These include resistance to infectious disease; alleviating lactose intolerance; positive impacts on blood pressure, cholesterol levels, allergies and respiratory infections; and even decreased risk of colon cancer.

Science has long accepted that our gastrointestinal tracts are home to many times more bacterial cells than there are human cells in the body. But scientists have yet to identify most of the microbiome's presumed 500 to 1,000 unique species. This makes it impossible to know which are friendly, harmless or hostile — or to assemble a clear picture of what the intra-intestinal ecosystem looks like — let alone how these trillions of mystery bacteria interrelate and engage with the rest of the body.

Lacking an integral understanding of what gut bacteria do, health practitioners are at a loss for how to coax the greatest benefit from them, via diet or otherwise. Still, probiotics have made their way into clinical practice, though UVM gastroenterologist Peter Moses says doctors usually recommend pills and supplements — which offer predictable doses of specific organisms — rather than directing GI patients to pop open a jar of kimchi.

"The science hasn't advanced to a point where we can identify who will respond to what probiotic and when," Moses says, "and while [fermented foods] probably provide a lot of helpful organisms, you don't know which ones or in what volume."

The medical community is warming to the probiotic trend, Moses says. As recently as the 1990s, antibiotics were the go-to remedy for GI ailments. "At that point, the only good bacterium was a dead bacterium, in most people's view," Moses recalls. "Now, we've realized that altering the bacteria that live in and on us can have health effects. That has been a big evolution."

Moses — whose current study focuses on the use of fecal implants to combat ulcerative colitis — seems optimistic that probiotics will have a role in medicine. "The more we learn, the more we'll understand what microbes can be used to promote health and combat disease," he says. "And the use of probiotics and prebiotics [will] have more of a role as we understand it better."

Despite his professional skepticism, Moses doesn't refute anecdotal evidence cited by probiotic devotees. "Someone who swears by eating fermented foods may not be wrong," he concedes. "You can't ignore people's experience; the thousands of years of human history that have supported eating fermented foods are probably based on fact. But we may not be able to explain it scientifically."

Food science professor Guo doesn't see a conflict between science and tradition. He grew up in the Chinese countryside, where the season's entire cabbage harvest was fermented for off-season consumption. "In China, we were using naturally existing L. plantarum [to ferment our food]," he says. "They'd been doing it that way for maybe 1,000 years. They didn't know what the bug was, but they knew it worked. I didn't know it was plantarum at the time, but I knew how to do it."

Though Guo doesn't ferment vegetables at home anymore, he says probiotic foods are part of his everyday diet. "Probiotics make you feel better, that's for sure," he says. "This is real. Quite a few studies have come out that say if you eat probiotics you improve your emotional state. Especially here in Vermont — it's a long winter."

Local culture: What probiotic products are produced in Vermont?

Not surprisingly, dozens of Vermont companies offer handcrafted, probiotic foods that can be incorporated into virtually any diet — vegetarian, vegan, gluten-free, whatever.

Most sweet-cream butter is churned from pasteurized fresh cream. But producers of cultured butter add live bacteria to pasteurized cream and allow it to ferment briefly before churning the butter — much in the way farmers and old-world butter makers have been making the stuff forever but with the added step of pasteurization, which is required by law.

Made with live cultures that thicken milk and enhance its nutritional value, yogurt is probably the most familiar — and widely consumed — probiotic food in America. But yogurt varies widely based on the quality of the milk, the cultures used and production methods.

Kefir tastes similar to yogurt but is fermented with a different blend of probiotic bacteria, which often includes yeast. The result is thinner (drinkable) and imparts more colony-forming bacteria into the human gut than do most yogurts.

A symbiotic colony of bacteria and yeast — called SCOBY — transforms sweet teas (often made with fruit juice) into a fizzy, gut-friendly beverage that originated in ancient China. While kombucha is typically sold in bottles, look for it on draft in your local co-op, growler bar or coffee shop.

While the products above are made by adding live cultures to base ingredients, fermented vegetables require no such additions. Local ferments include kimchis and sauerkrauts, pickles, salsas, and other preserves, typically sold in jars and used as condiments or side dishes.

Tempeh and miso (made with fermented soy) are likely familiar to most readers. But natto — a stringy, funky, slightly cheese-scented ferment made with whole soybeans — is relatively new to the Vermont market.