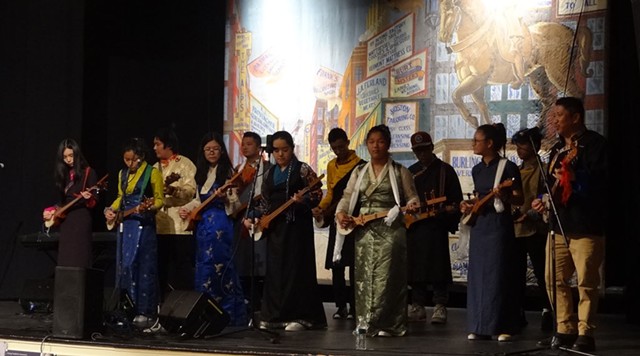 I never took a music class in school or played in the jazz band. I counted myself too cool for such things when, in reality, I was just too socially awkward. I was fortunate, though, to have a guitar teacher named Sherrod. Though he hated having to show me metal riffs, he made sure I practiced my scales, trimmed my fingernails and cleaned my strings after playing.

I'm not going to lie: Sherrod might be shocked to see how lazy I've gotten about practicing. But I hope he would be proud to know that everything he taught me inspired me to maintain a lifelong relationship with my guitar and music in general.

As a child of the '90s, I had music classes available to me even in the wasteland that was North Carolina's public school system. When I think about the current state of music education, however, I lose some sleep. According to the National Assessment of Educational Progress, arts education in schools has steadily declined since 1997. While budget cuts tend to be the immediate reason, the trend suggests that music isn't seen as an educational priority. The COVID-19 pandemic has only worsened the situation — Zoom isn't an ideal venue for an orchestra rehearsal.

Standing in firm opposition to this trend is Young Tradition Vermont, whose annual festival returns to Burlington this week. Founded in 2010 by Mark Sustic, the nonprofit fosters young people's involvement in traditional forms of music and dance. Its student touring group travels to places such as Japan, Scotland and Cape Breton for cultural and musical exchanges.

On hold since 2020, the Young Tradition Festival is back and bigger than ever from May 2 to 8 at Burlington City Hall Auditorium and various outdoor areas downtown. It celebrates multigenerational relationships, particularly those between mentors and their students — and, this year, it also celebrates Young Tradition Vermont joining forces with the Vermont Folklife Center.

"Traditional music and dance have been around for thousands and thousands of years," Sustic said by phone. "Behind every student is a mentor, and that chain continues for generations. [Young Tradition Vermont] is part of that continuum. We feel responsible to make sure there's an environment where those traditions can continue and even thrive."

Growing up, Sustic recalled, he rejected a lot of the traditional music his family listened to, being obsessed with the Beatles and the dawn of rock and roll. He began to see the importance of connecting to musical traditions as a student at the University of Michigan, where exposure to more forms of music broadened his horizons.

Sustic eventually moved east to Vermont, where he founded the Champlain Valley Folk Festival in 1983; it ran for 29 years.

"I'm an educator and have been for my entire life, so that's a big part of this for me," he said. "We're not here to substitute for musical education in schools but rather [to] be a supplement. We always try to work with school programs and colleges, because we want these connections embedded in our community."

To that end, the Young Tradition Festival offers many events designed to bring in would-be musicians. On Saturday, May 7, a showcase concert will feature a variety of young musicians and dancers speaking and performing with their mentors, all demonstrating how important that relationship is to sustaining healthy music education.

"Each pair will get about 10 minutes," Sustic explained. "It's not so much a forum for [the students] to show what they've learned ... as it is a way to tell us the story of how they and their mentor connected with the music."

For multiple days during the festival, Church Street will host an "instrument petting zoo" — a collection of musical instruments that kids can look at, touch and even play. For those who become intrigued and want to try lessons, Young Tradition has an instrument loan program: Folks ages 25 and under can bring home an instrument free of charge for a year.

"It's not easy to merge nonprofit organizations," Sustic admitted. "But we truly feel we can achieve what both organizations want better by teaming up."

Sustic specifically wanted to feature Québécois artists in this year's fest because Vermont has such a rich Canadian heritage.

"We've been trying to go to Québec for the last three years and failed," he said. "So, this is our first chance in a long while to bring Québec's music closer to us."

Finally, on Sunday afternoon, the festival will honor musicians who were involved with the organization and recently passed away. Marshfield composer Larry Gordon, folk singer Tony Barrand and English singer-songwriter Norma Waterson will be celebrated in a show hosted by the New England folk act Windborne.

Sustic hopes the festival keeps inspiring young people to pick up instruments, whether or not they pursue music as a career.

"We're not a talent search," he said. "We're not in the business of putting folks onstage so much as we're trying to give folks the opportunity to play music and keep it in their back pocket for life, regardless of whether they become a performer or, say, a carpenter. We believe music is important to help kids socialize and be happy."

Tickets for the Young Tradition Festival are on sale at youngtraditionvermont.org.

Last week, I inadvertently freaked out parts of Burlington's club scene. While talking with Nexus Artist Management's Justin Remillard about his new Synergy Sessions on Saturday nights at Club Metronome, I mentioned that the series would replace the beloved Sunday Night Mass series.

Well, reports of Sunday Night Mass' demise (by, um, me) were greatly exaggerated. Sunday Night Mass is alive and well and will return to Metronome on May 29 with a banger featuring EDM heavy hitters H-Foundation. Remillard says Synergy Sessions will continue to happen, as well, so there's a summer full of top-quality dance music to look forward to, despite what some jackass music writer may have inferred.

Stowe-based rapper, songwriter and producer Kyle Miller, also known as Darryl Dunnit, has a new single out called "Knock Me Down." The track is the latest in a busy year for Miller, who has been collaborating with other independent artists such as JetsonMade and OG Parker. "Knock Me Down," which features Kansas singer-rapper and Empire Music artist T-Rell, is a chilled-out groove full of twitchy beats, with an anthemic chorus that is ready-made to stick in the head. Find the track streaming on most services, and make a note to watch out for Darryl Dunnit — he just might be blowing up this year.

Vermont-based writer and artist Michael Caduto has released a new song called "Children of Ukraine." The author of the best-selling Keepers of the Earth series wrote and recorded the track as a statement against Russia's invasion of Ukraine and as a fundraiser. All proceeds from the song will go to the Voices of Children Foundation and the Sunflower of Peace Foundation, both of which aid Ukrainians affected by the invasion.

A gentle folk ballad arranged by Kent Allyn, "Children of Ukraine" finds Caduto singing optimistic verses such as "So we go about our lives; / We hope and pray that the people of Ukraine will find peace one day / And the world won't look away from their hopeful call."