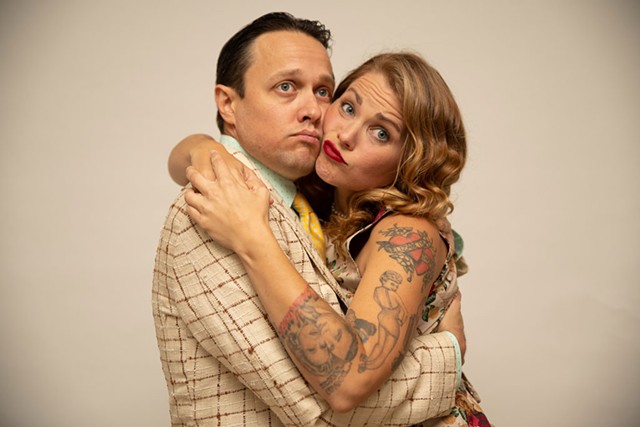 Nearly two years after releasing their debut, self-titled album, Yes Darling return bigger and better than ever. On Saturday, December 7, the duo of Ryan Montbleau (Ryan Montbleau Band) and Hayley Jane (formerly of Hayley Jane and the Primates) reunite for the theatrical debut of their shared project at the Double E Performance Center at the Essex Experience in Essex Junction.

If you recall, Montbleau and Hayley Jane released Yes Darling on Valentine's Day 2018, which was not too long after the formerly Boston-based artists, unbeknownst to each other at the time, relocated to Burlington. Though the two had collaborated casually in the past, Yes Darling was their first major shared project.

"Back when we put out [Yes Darling], we were still figuring out exactly what it was," Hayley Jane said in a recent phone interview. "It's kind of grown, and we've made discoveries about what it is."

The ambiguity she expressed relates to the project's unconventional nature. The highly conceptual album examines modern relationships by digging into some of the often-overlooked nooks and crannies of love, sex, romance, family and friendship, with an emphasis on the first three topics.

Montbleau and Hayley Jane explore the intersection of lust and anger, the pitfalls of polyamory, the loneliness of our incessant inner monologues, and the catharsis of working through our own bullshit. (Also, there's a song about tripping on acid while getting pulled over by the cops during an ill-fated road trip.) The duo achieves all of this while simultaneously traversing all manner of styles and genres, such as swingin' jazz, folk-rock balladry, old-school ska and near-Broadway show-tune pageantry.

Though the songs themselves aren't terribly interconnected — there isn't a cut-and-dried narrative on the record, exactly — Montbleau and Hayley Jane tie everything together through interstitial, sketch-like moments, both on the recording and in their live performances. Atop being excellent singer-songwriters, the two have proven to be stellar actors and improvisers, as well.

The artists kept things fairly streamlined while touring the album in 2018, largely opting for the simplicity of a single acoustic guitar. I often wondered whether the project would move beyond this structure.

"This is the show we've been doing, but it's such a step up," said Montbleau of the forthcoming debut.

The theatrical version keeps everything fans love and expect from past Yes Darling shows and adds major production value. Namely: They'll perform with a full rock band. Though the artists preferred not to give too much away about their stage plot, they described a full set that includes multiple locations through which they'll move during in the show. And given that they'll debut it in the Double E's T-Rex theater, expect them to utilize the screen.

Recently, the band unveiled a new music video for its song, "Call Your Mother." Directed by Dorian Weinzimmer, the clip begins in a familiar Burlington hot spot, the Light Club Lamp Shop. The song pits Montbleau and Hayley Jane against one another, each urging the other to "call your mother" and dissuade any anxiety she might have about the debauchery she thinks each might be getting up to — all of which the viewer sees in a series of hilarious cutaways.

On the night of the show — which has a hard R rating, by the way — attendees are encouraged to dress up like they're extras in the first season of "Mad Men." If you've never seen the television show, think slick suits and flouncy party dresses. Word is that ticket holders will get to walk a red carpet, so you'll want to put on your weekend best.

Oh! And expect to hear a brand-new song.

"It might be one of my favorites," said Hayley Jane.

"It's my least favorite," Montbleau chimed in.

Save it for the stage, you two!

From Friday, December 6, through Sunday, December 8, dancers and musicians practicing indigenous styles from all over the globe descend on the Champlain Valley Exposition in Essex Junction for the Vermont International Festival. Highlights include Nova Scotia duo Anita McDonald and Ben Miller, who specialize in Scottish folk music. They perform all three days of the fest. Sabor 2.0 present a selection of salsa, bachata and other styles originating in the Caribbean region on Saturday, while Elijah Kraatz Trio de Rumba explore the music of the Romani people on Sunday. It's a global extravaganza, and a modestly priced one at $10 for individuals and $25 for families.

Are any Vermont-based music makers putting out any new Christmas music this year? If so, send it my way. Bonus points for original material, off-kilter subject matter and just plain ol' irreverence. Reminder: I'm kind of a Grinch.

Tanlines, "All of Me"