Can ya feel that, Vermont? I don't even have to explain what "that" is, do I? You felt it the other day when you donned a sweatshirt or two for your morning coffee. You sighed softly to yourself upon glimpsing the first hints of rust in the trees on your street. Perhaps you've suddenly started craving apples.

The spindly tendrils of fall have slowly begun to wind their death grip around summer. And we don't need southerly flying waterfowl to know it's coming. We have a better, or at least more entertaining, seasonal indicator: Grand Point North.

This Saturday and Sunday, September 17 and 18, Grace Potter's annual throwdown at Waterfront Park in Burlington will once again serve as our unofficial end-of-summer bash. As per usual, she's invited a slew of famous friends to help, including KALEO, Blind Pilot, Old Crow Medicine Show, the Wood Brothers, the Record Company, Basia Bulat and Eliza Hardy Jones. You probably don't require my help to navigate the headliners. After all, there are two types of people in this world: Those who love "Wagon Wheel" and those who I'm friends with. So I'd like to hip you to the local slate at GPN and offer my annual plea for you to get to the show on time for once.

Kat Wright and the Indomitable Soul Band are technically listed among the headliners, which ought to tell you something about the kind of year that band is having and what lies in store for them in the months to come — hint: a baller new record and ambitious touring. The Queen City's reigning R&B royals top a stellar slate of locals on Saturday. For example, neo-soul cool kids Smooth Antics, led by the incomparable Steph Heaghney. If you're placing bets on who might one day succeed Wright as the Seven Daysies' best-vocalist winner — as Wright unseated Potter this year — you could do worse than laying money on Heaghney. She's that good.

Billy Dean & the Honor Roll have three ports of call — Harlem, Massachusetts and Vermont — representing the three places that lyricist and MC Billy Dean Thomas (aka the Queer B.I.G.) calls home. The band's topical fusion of hip-hop, funk and jazz has garnered comparisons to the likes of both the Roots and Rage Against the Machine. That's a tad hyperbolic. But their mix of smooth, jazzy grooves and tight, politically charged flow justifies the correlations.

Also on Saturday are BTV rockers Blue Button, who might just be the loudest band ever on the GPN stage. Note to the noise-averse folks who bought waterfront condos next to one of the biggest and busiest concert venues in Vermont: You might want to go out for dinner that night. (Also, check out the review of BB's sister band Banana Schlitz's new tape.)

Though they don't technically live here anymore, I'm bestowing honorary local status on Northampton, Mass.-based glitter-pop band And the Kids, who top the local marquee on Sunday. Because damn if there isn't a more relatable record about relationships in small communities than ATK's 2016 gem, Friends Share Lovers.

Rounding out the local portion of the show on Sunday are all-female, all-awesome rocksteady favorites Steady Betty and up-and-comers Iron Eyes Cody. Not for nothing did the latter band make my midyear list of the best local albums of 2016 with its Future Fields-produced debut, All Good Saints Have Died.

Oh, and before I forget, some gratuitous company shilling! As has been the case for four straight years, the winner of the annual Seven Days-run Grand Point North Local Band Contest will kick off the festivities on Saturday. This year that honor belongs to Northeast Kingdom blues rockers Evansville Transit Authority. Do us proud, ETA.

Of course, every good festival needs a good after-party. GPN is no exception. The fest's official post-rockin' bash takes place on Saturday, September 17, at Nectar's in Burlington. Asheville, N.C., baroque folk-pop outfit River Whyless open the show, and it's a lovely little ensemble. But don't just take my word for it. Let's ask National Public Radio's Bob Boilen for his thoughts. Bob?

"This band is an amalgamation of folk and pop and beyond. Brilliant harmonies and words."

Headlining are the funky local supergroup Soule Indomitable, which features Russ Lawton and Ray PaczKowski from Soule Monde and Bob Wagner and Josh Weinstein of the Indomitable Soul Band.

In case you've missed it, for the last several Thursdays, local jazz guitarist and Grammy-nominated recording engineer George Petit has curated a residency at Halvorson's Upstreet Café in Burlington. Each week he's joined by a rotating cast of talented friends, variously including pianists Tom Cleary and Ira Friedman, bassist John Rivers, drummers Gabe Jarrett and Luke Adler, and saxophonist Chris Peterman. It's a lively, freewheeling night. So freewheeling that when Petit put the combo together, his only rule was this: No rehearsing.

Some nights, the band plays not out back, where Halvy's shows tend to be, but out in front on the street, adding to the anything-goes vibe. If the weather holds this Thursday, September 15, that's where you'll likely find Petit and co. again. Unfortunately, it's the final night of the residency.

If you miss out, fret not. Petit, who returned to Vermont from NYC earlier this year, kicks off a weekly Tuesday residency with his trio — including Adler and bassist Pat Markley — at the Gryphon in Burlington on Tuesday, September 20.

Last but not least, welcome home, Duke Aeroplane & the Wrong Numbers! The boozy, bluesy offshoot of beloved local "suspender fusion" act the Vermont Joy Parade is back on native soil after relocating to New Orleans. The band will be at Radio Bean in Burlington on Friday, September 16, with a pair of fellow Crescent City acts: bubblegum-folk outfit the Tumbling Wheels and songwriter Shayne Sayers. Duke and his Numbers are in town celebrating the release of a new record, Higher Ground. They're also kicking off a northeast tour with those aforementioned NOLA bands — both labelmates on United Bakery Records. 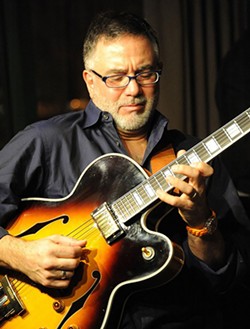 The new album contains all of the scruffy hallmarks that long ago endeared the band to local audiences. First and foremost, that includes the roguish charm of Duke Aeroplane himself — aka Galen Peria. As always, Peria leads his band with the seedy, theatrical flair of a carnival sideshow barker. Think Tom Waits meets P.T. Barnum. And Peria's writing has never been more vivid as he navigates through tales of morality as murky as the swamp he now calls home.

But what separates his band's latest album from earlier work is fidelity — perhaps an odd term given the cast of cheats and lowlifes who typically populate his songs. Local swampy-tonk hero Brett Hughes recorded Higher Ground, and it stands as some of his finest engineering work. Never has Peria's band been given such a fine audiophile's treatment.

Still, the best way to experience Duke Aeroplane & the Wrong Numbers is in person, ideally several drinks deep and surrounded by your sweatiest, most debauched friends. I suspect the Bean will once again provide exactly that this Friday.