I have a confession to make: This year's Waking Windows was my first. I know, I know. It's surprising. Allow me to explain.

I was living in California for the first four years of the festival, so I'm off the hook for those. I was back in Vermont for year five, but I was still in recovery mode from my life out west. Let's just say I wasn't getting out much during that time. And I was out of town last year. Pretty simple explanation.

Given that I was a WW newb, I truly had no idea what to expect. You can read all about my exploits in this week's music feature. That account is mostly limited to observations about the music itself. But I have a few additional thoughts and tidbits to share.

After WW announced it had sold out of weekend passes, I assumed crowds would be unmanageable, which was usually the case at sold-out festivals in Cali. I pictured myself squeezing through a jungle of bodies just to find one square foot of standing room to call my own. I assumed lines for Porta-Potties would exceed 15 minutes. I thought that only those who arrived early to performance locations would have a decent viewing space. None of those concerns came true. I felt free and easy all weekend.

About the Rotary Stage: This perhaps only applies to me, because I am highly prone to motion sickness, but I felt nauseous while sitting there after dark. The dizzying, perpetual motion of headlights and taillights careening around the rotary — I feel sick just thinking about it — made me wish I had packed some Dramamine.

Have you noticed that the C is missing in the word "Canal" on the street marker at the corner of Main and West Canal streets? That's a pretty crucial letter to go missing.

Men's fashion beat: When did Hawaiian shirts come back into style? And when did designers start making them so well tailored? Vibrant, floral prints were all the rage with the menfolk. Also: Canadian tuxedos. (I'm guilty of that one.)

Did you get a chance to immerse yourself in Brian Raymond's and Nicholas Campolo's interactive sculpture "D#Echo"? The chrome-covered, asymmetrical geodesic dome explored concepts of consumption, commodification, technological influence and perceptions of reality. A pair of headphones delivered a highfalutin, robot-voiced recording that attempted to contextualize the piece.

An excerpt from the recording: "Slight adjustments of focus can invert reconceptions (sic) and heighten awareness of one's own experience, opening new avenues of introspection — fresh vantage points beyond the filters. How do we become what we experience? And how does our environment become us? Is there separation?" I found myself chewing on these concepts all weekend and visited the piece several times.

Can Lucky Cloud please remain a DIY music venue? Thanks in advance. 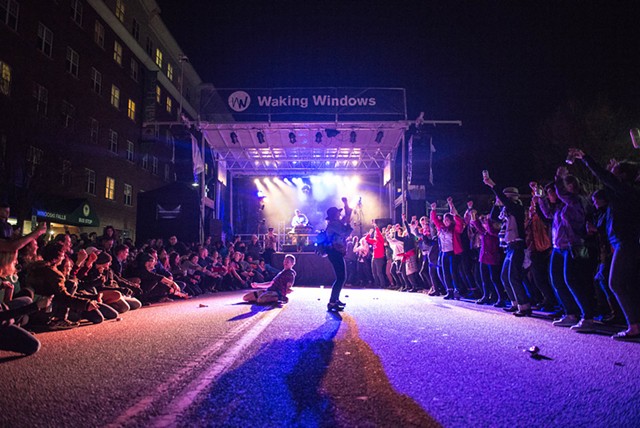 Did Dan Deacon organize the biggest dance-off Winooski has ever seen? That was a special moment. In case you missed it, the EDM sorcerer instructed the crowd to make a giant circle. He then recruited unsuspecting people from the inner perimeter to dance like everyone's watching. I stood way in the back.

Finally, a little perspective. I'm sure you've been following the schadenfreude media circus that was the Fyre Festival. In case the decade's most hilarious entertainment news story has somehow escaped your gaze, here's the gist: A wealthy tech-bro and Ja Rule "organized" a "luxury" music festival in the Caribbean. It did not go well. You can search out the details yourself.

Throughout the weekend, I found myself comparing that highly publicized train wreck with WW. In terms of operation and execution, they are polar opposites. FF was the product of out-of-touch, materialistic amateurs who bit off way more than they could chew. WW began as a scrappy fringe fest, and its organizers have taken manageable steps to grow it to the expansive extravaganza we experienced last weekend. Hats off.

I think we can all agree that tribute acts can be a little bit hokey. Charlotte-based singer-songwriter Justin Panigutti, the man behind Into the Mystic: A Tribute to Van Morrison, admits as much.

"I feel they tend to be giant cans of [Cheez Whiz], lacking any soul, with fancy labels printed on the coattails of great talent," he writes in a recent email to Seven Days. I wonder how he really feels, though?

Now that WW has broken the seal on live music in Winooski's Rotary Park, the city's Department of Parks & Recreation invites you back for Winooski Wednesdays, a free summer concert series.

Metal Monday returns to Nectar's on Monday, May 15, with Wrekmeister Harmonies, Wolfhand and Ghastly Sound. The night's cofounder and local dork, Matt Hagen, tells Seven Days via email that the late-spring installment is just the tip of the iceberg. He's booked a bunch of shows throughout the summer and fall. Further details are forthcoming.

The nomination period for the 2017 Grand Point North Local Band Contest has closed — and voting has commenced! As you may recall, the winner opens this year's festival. And check it out — there are 73 bands on the ballot. You can only vote once per day, and the voting period ends at 5 p.m. on Sunday, May 14. Find the ballot form at sevendaysvt.com.

Home Body, "Tits to the Sky"

TEEN, "All About Us"