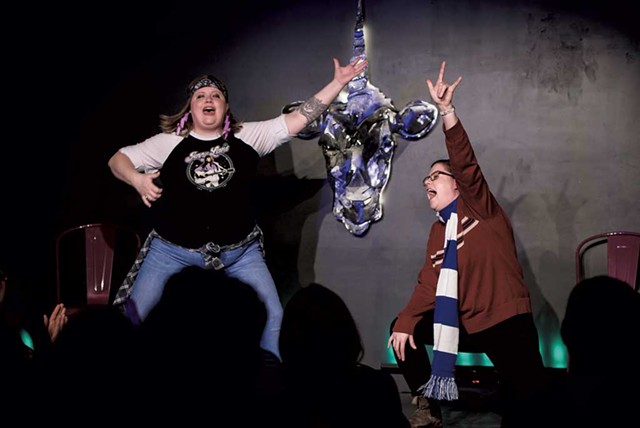 When an artist achieves success in a small city like Burlington, they're sometimes saddled with the "big fish in a small pond" narrative. Underneath the colloquialism's folksiness, it's a low-key way to diminish someone's accomplishments.

The phrase — and its inverse — often comes up when a hometown hero moves on to pursue their creative goals in a larger market. "Get ready to be a small fish in a big pond," I've heard people crassly say as folks forge on to the great unknown. Way to be supportive, ya jerks!

The concept of big fish versus little fish — and how it relates to an exciting announcement — came up during a recent phone call with Vermont Comedy Club owners Nathan Hartswick and Natalie Miller. Here's the gist: Burlington's comedy scene is growing. While Burlington itself is still small in terms of population, the comedic arts are thriving here.

"The standup scene [and the VCC] have great reputations, nationally," said Miller.

Now, I didn't have time to call Cobb's Comedy Club in San Francisco, New York City's Comedy Cellar and every chuckle factory in between to unequivocally verify that claim. But if you look at the VCC's lineup on any given weekend, you'll see big, relevant names in contemporary comedy without fail, which is pretty telling of the club's place in the greater comedy landscape.

In 2016, after recording his comedy album Live in Burlington at the VCC, joke slinger Mike Finoia told Seven Days some pretty complimentary things.

"It's sad how many cities you go to where club owners don't respect and nurture the local talent," said Finoia. "But Nathan and Natalie understand how important that is. And the comedy community [in NYC], you'll talk to people at the Comedy Cellar and you'll hear all these atrocious stories from the road. But then sometimes you'll hear, 'Dude, I just did the Vermont Comedy Club. What a club.' And I think to myself, Way to go, Nathan and Natalie."

OK, wait — weren't we talking about fish and ponds? Stay with me, now. It relates to the name of a brand-new fest the VCC is putting together this summer. Dubbed the Big Pond Improv Festival, the three-day throw-down will revive the spirit of the bygone Green Mountain Comedy Festival, which jump-started the state's comedy scene and ran annually from 2009 through 2016. Hartswick and Miller coproduced that laugh marathon with founder Kathleen Kanz.

As Miller noted, the GMCF "was a great way to showcase talent all around the state and bring attention to the fact that there's a standup scene in Vermont."

But Hartswick added, "It feels like that mission has been fulfilled."

The GMCF certainly helped raise the profile of comedy in Vermont — for proof, one need only look at the popularity of local standup shows, at VCC and elsewhere. However, with regard to the local improv scene's reputation within and beyond our fair state, Miller noted that "word hasn't gotten out yet." The time has come to do something about that, and the new festival's founders hope to generate some cachet for local improvisers, bringing them into the "big pond" alongside their standup compatriots. (Another reason they named it Big Pond Improv Festival is because there are already plenty of events titled "Green Mountain Such-And-Such" or "Champlain Yada Yada.")

Hartswick and Miller mentioned the success of their recent March Madness Two-Prov Tournament, a bracket-style improv contest that pitted two-person teams against each other.

"We saw so much creativity and excitement, and the audience had so much fun with it," says Hartswick.

Though the lineup hasn't been released yet, we can expect about 30 improv teams from all over to descend upon the VCC Thursday through Saturday, July 19 to 21. Roughly three teams will perform per hour, each taking an approximately 20-minute slot. For families or adults that are faint of heart, at least one block will be marked as "clean" and won't have any jokes about dicks, sex acts or shitting your pants.

Since we don't yet know which groups will take the stage, we also have no idea what to expect from performances. And, yes, I realize the irony of that statement: Not knowing what to expect is kind of the whole damn point of improv.

More generally, we can expect both long- and short-form improv. If you don't know the difference, short-form improv is the kind of high-concept antics Ryan Stiles and company got up to for nearly a decade on ABC's "Whose Line Is It Anyway?" New prompts and frequent suggestions from the audience constantly refresh and restart the hilarity.

Long-form improvisers riff continuously for an extended period of time based on a single cue. It's what the VCC's house team, the Unmentionables, does every Thursday with the Daily Grind show at VCC.

Beyond that, we'll probably see a lot of themed sets. According to Hartswick and Miller, the possibilities are endless. I'm spitballing here, but I'd love to see a Mad Max-themed set, an homage to Alfred Hitchcock, something about My Little Ponies and their fiercest acolytes, the Bronies, and anything that takes place in a submarine.

Most of the action will happen on the VCC's main stage, but some "small, weird shit" will go down in the club's newly utilized Comedy Lab, according to the comedy couple.

To tide you over until Big Pond, definitely visit vermontcomedyclub.com to find out about its monthly improv events and weekly classes. Another hot tip: Miller mentioned she's reading Sam Wasson's book Improv Nation: How We Made a Great American Art, which traces the spontaneous art form's roots from the mid-20th century through today. Jason Zinoman's review in the New York Times makes it sound like an informative and enlightening read for anyone who wants to learn more about the key players who shaped the practice.

"The ascent of improv, which has become arguably more influential than standup, is one of the most important stories in popular culture," writes Zinoman, noting that Wasson might be the first author to take such a deep dive on the subject.