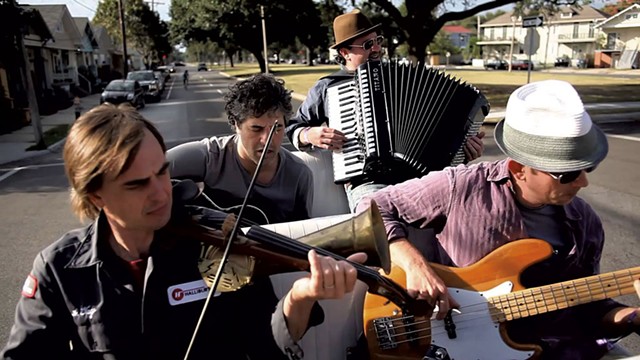 Two weeks ago, I wrote a feature titled "Bah, Humbug: A Curmudgeon's Guide to Local Holiday Music," and it's come to my attention that it offended some folks. That was not my intention, and I'm truly sorry.

The article was a darkly comedic conceptual piece in which I took on the role of a Grinch-like character who hates Christmas — and, thus, hates the season's music. On the surface, it appeared I was simply talking trash about a bunch of Vermonters' yuletide jams. But the gag was that all of the things I seemingly mocked are actually the things that make the tracks I singled out cool and special. I thought that would be obvious, but, apparently, I was too subtle, and a few people thought I was just being mean-spirited. Again, my apologies.

If you're looking for a fun, Hanukkah-adjacent event this week, you might consider checking out the rip-roaring sounds of the New Orleans Klezmer All-Stars. The quintet blends the signature sounds of its bayou hometown — think Dixieland jazz and New Orleans funk — with an unmistakable, traditional Yiddish vibe. The band features members of the Big Easy's the Iguanas and Galactic.

You have two chances to get down with the All-Stars: Friday, December 15, at Nectar's in Burlington, and Saturday, December 16, at Zenbarn in Waterbury. Local cumbia band Mal Maiz get the party started at the Nectar's show.

By the way, the Zenbarn gig is a benefit concert dubbed Share the Light. Attendees are offered a sumptuous buffet full of traditional Jewish foodstuffs prior to the evening's entertainment. You'll have to drop a bit more of your gelt for this outing, but your shiny gold coins support Barre nonprofit Capstone Community Action's emergency fuel and food assistance Fuel Your Neighbors campaign.

Earlier this year, esteemed and in-demand local bassist Robinson Morse (Vorcza) unleashed the long-awaited debut record from his groovy, modern jazz ensemble Sound of Mind. Originally released only on CD and digital download/stream, the album, Enough Is Plenty, is now available on LP, thanks to the Queen City's analog dream factory, the Burlington Record Plant.

This weekend, SOM perform twice: Friday at Zenbarn, and Saturday at the FlynnSpace in Burlington. Acclaimed multi-instrumentalist Peter Apfelbaum joins the group. The saxophonist, drummer and pianist is known for his seminal work with the Hieroglyphics Ensemble from Berkeley, Calif., and, more recently, the Trey Anastasio Band, among other projects.

Morse and Apfelbaum go way back.

"I first heard Peter playing with [local jazz man] James Harvey's band 25 years ago," Morse writes in an email. Around that time, he found the Hieroglyphics Ensemble's Jodoji Brightness in the used CD section at Pure Pop Records in Burlington. "[I] wore it out with so much listening," he writes.

Morse and Apfelbaum finally met in 2003 when the latter was playing with an early incarnation of Anastasio's band. That meeting led to a handful of shows Vorzca did with Apfelbaum and trombonist Josh Roseman, an experience that proved formative for Morse and SOM.

"Looking back," writes the bassist, "[writing] for a larger ensemble of horns and rhythm grew into the concept that Sound of Mind is today."

Isn't it just neato when your idol becomes your collaborator?

You all know that ABC's "The Bachelor: Winter Games" is currently being shot in Vermont, right? If you didn't know that, do yourself (and me) a solid and check out last week's issue, which featured not one but two pieces on the show — including the bulk of this column.

If you missed it, the forthcoming spin-off of the popular competitive reality show is set to air opposite the XXIII Olympic Winter Games in February 2018. In other words, you'll have to choose between watching the world's best athletes and the world's best, uh, hot tub carousers and wine drinkers. (Ooh. I wonder if "The Bachelor: Winter Games" plans to give out medals. "And the gold medal for best clandestine hookup goes to...")

As we reported previously, production began last week, and the series' producers tapped local roots trio Pete's Posse to provide entertainment for a special contra dance down in Wilmington. As much as we would've liked to send a staffer to infiltrate the hootenanny, it just wasn't feasible. However, we reached out to the Posse's Tristan Henderson for the inside scoop.

"The shoot was great," Henderson writes. "[It was] a fun and busy evening [with] lots of dancers. Everybody had a blast, and the crew was great to work with!"

And that's all the info he could share. Sorry, folks. All people present for the shoot had to sign one of those darn nondisclosure agreements. Curse you, ABC legal department!

We'll have to wait until February to find out whether the dance was just a fun diversion or the show's contestants had to learn how to "cast off" and "box the gnat."

For those of you wondering what the heck is going on at the former site of the Rusty Nail in Stowe, allow me to recap the changes.

Seven Days previously reported that restaurateurs Mark Frier and Chad Fry, of Waterbury's the Reservoir Restaurant and Tap Room and Stowe's the Bench, planned to transform the Rusty Nail into a Mexican eatery called Tres Amigos — while keeping a performance area separate but intact. Officially known as the Tres Amigos & Rusty Nail Stage, the (sort of) new room has a capacity of approximately 300 — making it roughly the same size as the Higher Ground Showcase Lounge.

And, speaking of Higher Ground, the club's cofounder and former co-owner Kevin Statesir is handling booking duties for the Rusty Nail. He tells us that the club will feature "local and regional music every weekend [with] some well-known marquee acts sprinkled throughout the upcoming season."

"It's got the same stage, great sound and lights," he writes.

Upcoming shows include Gubbulidis — the jam-tastic side project of Twiddle's Mihali Savoulidis and Zdenek Gubb — on Friday, December 22. Funk duo Soule Monde take the stage on New Year's Eve — that is, Sunday, December 31.

Blood Orange, "But You"