I got my first sunburn of the year last week. It was basically nothing — just a day or two of minor facial discomfort. An annual wake-up call, it reminded me to a) see if I even have sunscreen in my house; b) check the expiration date on said sunscreen; and c) generously apply that shit to my poor, desiccated visage before spending long periods of time under our solar system's blazing star. After all, the outdoor music season is upon us, and personal health and safety are no joke.

Now that I've properly set up a segue into outdoorsy summer fun: If Waking Windows is the precursor to the official start of summery music hijinks, then the arrival of ArtsRiot's weekly Food Trap — er, I mean Truck Stop — kicks it into high gear.

If you don't know what the Truck Stop is, read an enlightening conversation between Seven Days food writer Sally Pollak and ArtsRiot chef George Lambertson. They cover all the basics you need to know before diving into the food-stravaganza.

Now, I jokingly call it the Food Trap because — let's be real — it can get a bit claustrophobic in the courtyard behind ArtsRiot. Thousands of people visit the gastronomic gathering in Burlington every week to get a jump on the weekend. And, like an epicurean virus spreading its deliciousness across the South End, this year's Truck Stop is growing and changing to accommodate its increasing popularity.

First, no longer will the Shark Week-level feeding frenzy be confined to the rear lot. Use of the shared parking area that serves ArtsRiot, Green State Gardener, and Dedalus Wine Shop, Market & Wine Bar will expand the party's square footage by quite a bit. And a reconfigured layout in the main noshing area will eliminate the serpentine path between vendors. (Hooray for personal space!)

Speaking of Dedalus, its patio will be open, and the vino and oysters will be a-flowin'. But you won't be able to bring your tacos, pulled pork, kimchi or anything procured at one of the food trucks with you. I assume it's a question that many folks will be asking, so I thought I'd quash your dream of simultaneously pounding some ribs while kicking back an oaky vintage. Sorry, but them's the rules!

The most exciting part of Truck Stop — from where I'm sitting, at least — is the flood of kick-ass music happenings, indoors and out. Last year, ArtsRiot flirted with free, live indoor music as a kind of Truck Stop after-party. This year, that's happening every single week. And every show is free.

A mix of local, regional and national artists will grace its stage, starting this Friday, May 18, with gritty Americana band the National Reserve. If you missed the Brooklyn-based five-piece in any of its local performances in the past year or so — such as 2017's Waking Windows — you can right that wrong without dropping a dime.

Subsequent acts jumping on board to entertain the food-coma crowds are local surf studs the High Breaks (May 25), local honky-tonk impresario Brett Hughes (June 1) and New York-based retro-rock/Americana group the Rad Trads (June 8). Truly, these "trads" are the raddest I've encountered in quite some time, so you probably don't want to sleep on that show.

As anyone who's been to Truck Stop can attest, the main stage shows are only half of the story when it comes to entertainment. As you cram one of ArtsRiot's signature 400 Burgers down your maw on Friday, the toe-tapping strains of DJ Disco Phantom will help you burn off a few of the hundreds — OK, thousands — of calories you ingest.

Hardly background music, the food fest's earlier, outside entertainment gets a new home in the loading window of nearby neighbors AO Glass. Prominently placing artists in the elevated location will not only draw more attention to them, but I imagine the new vantage will help spread the sound more evenly across the courtyard.

Party starter DJ Cre8 heads up the following Friday. New Hampshire indie-folk band Party of the Sun take the next slot and, in honor of Burlington Discover Jazz Festival, Khalif Neville joins the fun on June 8. The keyboardist is the son of the late Charles Neville of soul-funk band the Neville Brothers. The elder Neville passed away only a few weeks ago in April.

A little ways down the road, you'll definitely want to check out back-to-back sessions with Japanese Breakfast (July 13) and Lady Moon & the Eclipse (July 20). I imagine these shows in particular will fill up fast. Beware: Since all Friday night Truck Stop shows are free, they're also first come, first served. 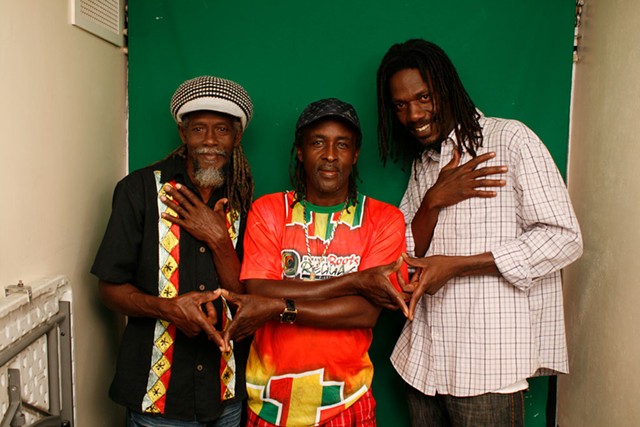 Reggae fans are swimming in it this week. From Thursday, May 17, through the entire weekend, you can drop into some dub, dancehall and all-around Afro-Caribbean sounds at six different Chittenden County events.

On Thursday, Jamaican vocal trio Culture featuring Kenyatta Hill descend on Nectar's for a night of throwback, rootsy vibes. Hill is the son of Joseph Hill, a founding member of Culture who passed away in 2006. The band is going head-to-head with local reggae-infused cover band Lyon's Disciple up the street at Radio Bean.

On Friday, DJs Big Dog and Jahson throw down an extra-special edition of their popular Mi Yard Reggae Night at Club Metronome. That's in addition to the irie dance party's regularly scheduled programming on Sunday at Nectar's.

Aside from live music, DJs and comedy, Burlington's Half Lounge also features rotating art exhibitions. Famed principal photographer for Burton Snowboards Dean "Blotto" Gray displays a collection of his works in a new show at the pint-size club beginning Saturday, May 19. Titled "Skateboarding in Vermont," the photog's dynamic shots of Green Mountain skater bois and grrls are on display until Friday, June 15.

The Pattern Forms, "A Simple Walk"

Tobias Jesso Jr., "Without You"