Soundbites: To Bead or Not to Bead

All right, folks, strap in. It's going to be one of those weekends when you'll have to make some tough decisions about what music to shove into your earholes. Music venues and public spaces are popping at the seams with entertainment offerings, all thanks to Magic Hat Brewing's 22nd annual Mardi Gras celebration. This year, Magic Hat aims to bring awareness and raise funds for the Vermont Foodbank — as well as entertain the snot out of you. Here's your official guide to making the most of your beer-soaked, bead-laden weekend. (Also see the program inserted in this issue.)

Let's start with the official offerings, shall we? The weekend kicks off with a free show from legendary ska/funk/punk rockers Fishbone. The California collective has been skankin' it up since the 1980s and can still make you work it like Lori Loughlin and Annette Funicello in Back to the Beach. Fishbone take over the top block of Church Street on Friday, March 10.

Don't wear yourself out too soon, though. It's going to be a long weekend. The Friday night ska vibes keep flowing at the Higher Ground Showcase Lounge with the ladies of Steady Betty. But before the gals rock ever so steadily, feast your eyes and ears on the smooth hip-hop stylings of Billie Dean & the Honor Roll and some sultry R&B goodness from Lady Moon & the Eclipse. DJ Ryan Brown keeps the energy up between sets.

You'll want to be up bright and early on Saturday, March 11, for the Kegs & Eggs brunch and beer party at the Magic Hat brewery. Aside from your favorite suds, and nom-noms from Kountry Kart Deli and Taco Truck All Stars, catch sets from Nick Russell, Sean Ryan and the Swinson Sisters, and the Funky Dawgz Brass Band.

After you've had a few sips and a Rise and Shiner, safely proceed back to the top block of Church Street at noon for PitchBlak Brass Band's girthy blend of horn-heavy hip-hop. And since you're already there, stay put for mammoth Afrobeat funksters Big Mean Sound Machine.

At this point, you must be pretty tired. Well, too bad! You're not done yet. If you have enough energy/patience after the parade, you might as well stick around for another free show. Head over to City Hall Park post-parade for eclectic rockers White Denim. 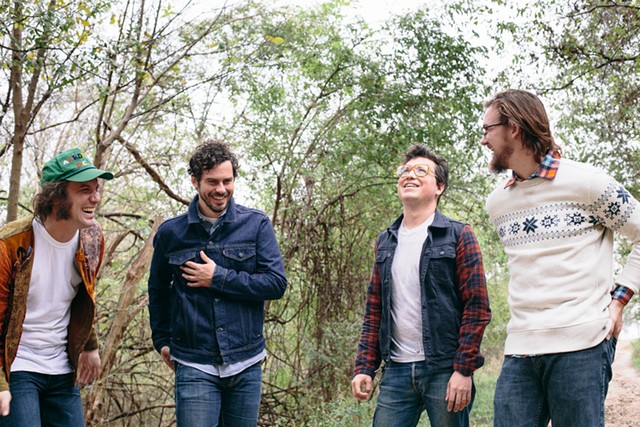 That's it for the main attractions. But there's a deluge of other merriment. Here are a couple of other key places to be.

Nectar's has nonstop tuneage starting at noon on Saturday, and it's free until 7 p.m. This means you can enjoy some bluegrass from the Tenderbellies, reality-altering rock from Doctor Rick, jazzy soul from the New Review and thunderous psychedelia from People's Blues of Richmond — all without dropping a dime. But, I mean, definitely order a drink or something. It's freakin' Mardi Gras.

The party rages on in the evening with soul band smalltalker, an encore performance from PitchBlak Brass Band and funkadelia from Swift Technique. Circus punks Bella's Bartok close out the night. Jeezum Louise-um, that's a lot of power packed into one club.

More into DJ music? Then plant yourself in the Blue Room at Red Square. And by "plant," I mean dance until you can't feel your extremities. Starting at noon on Saturday, a diverse army of beat slingers takes control of Red Square's secluded party zone, including DJ Dodg3r, DJ Frank Grymes, Craig Mitchell, DJVU, D Jay Baron, DJ KermiTT and Reign One. Expect to hear hip-hop, mashups, house and probably some sweet top 40, too.

The main room at Red Square is packing a heavy lineup, as well. Blues band Left Eye Jump get the ball rolling on the morning shift. DJ Cre8 locks down the midday madness. Later on, Mango Jam Vermont bring the bayou to BTV with sizzling Cajun and zydeco. You can also catch them earlier in the afternoon at the Skinny Pancake's waterfront location. Red Square's resident DJ Mashtodon closes out the marathon.

If the pursuit of beads bums you out, you're in luck. It turns out there are some interesting music happenings totally unrelated to Mardi Gras this weekend.

Since everything aforementioned is designed to make you move, let me suggest something that requires you to sit perfectly still. On Saturday, March 11, Jeff Howlett, codirector of the documentary A Band Called Death and front man of several '90s Burlington metal bands (Slush, Five Seconds Expired, Non Compos Mentis), returns to the Light Club Lamp Shop with his tintype portrait studio. If you're unfamiliar with the tintype method, it's a 19th-century photographic process involving metal plates. Think Ken Burns' "The Civil War." Prints will set you back $50. Howlett offers his services to individuals, families and bands.

Ahem. Let me say that again: And bands!

While the portraits are created, a bunch of bands is scheduled to entertain you while you wait. Tyler Daniel Bean is up first. He'll likely get the party started by making everyone cry with his sorrowful indie rock. The angst continues with Adrian Aardvark and their self-described "balance of despair and hope." Then twangy harmonica virtuoso Eric Sommer livens things up, followed by the always energetic and ultra-fabulous electro-poppers Heloise & the Savoir Faire. Vinyl superstar DJ Taka concludes the night, as he does every Friday and Saturday.

As if there weren't enough happening on Saturday, how about a masquerade? Burlington's nondenominational center for Jewish life, Ruach haMaqom, sponsors the Purim Masquerade Ball and Political Theater at ArtsRiot. If you aren't familiar with Purim, it's a celebration of liberation as chronicled in the biblical book of Esther. Expect a retelling of the story of the evil Haman and his plan to eradicate the Jews, spliced with contemporary politics. Brass Balagan and Barika perform.

Electric Guest, "Back & Forth"

Active Child, "Calling in the Name of Love"