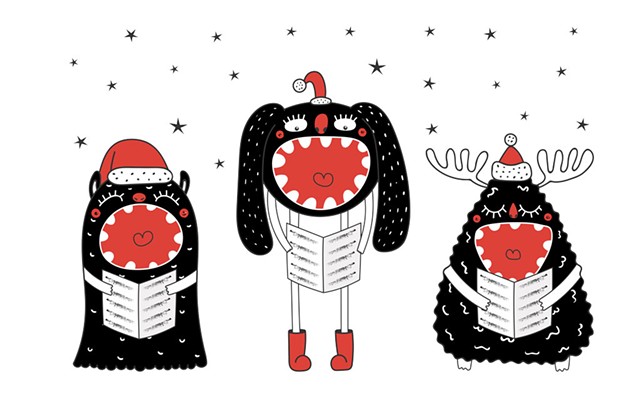 'Tis the week before New Year's, and I've gotta say

We've much to discuss before the big day

Or, I suppose, the big night, as it were

Lest it pass you by in a big, foggy blur

It's nice to have someone point events out

And that's what this poem is all about

I'll clue you in to what's happening this week

And give you a hearty New Year's sneak peek

Read on for tips about how to get down

With all the best parties happening in town.


Now wait up, please, hold on just a minute

Just a clarification before I begin it

By no means is this list at all comprehensive

If I miss your show, please don't get defensive

Consider this selection but a holiday sample

It's not the last word, more like an example

Of where I would go if I could hit every party

Of course that's impossible, or at least foolhardy

So strap in, get comfy and read on to find

A bounty of concerts, if you're so inclined.

This Thursday eve, and if you need a reason

To head down to SideBar, perhaps peep the lineup

Check the Facebook event page to see who has signed up

The showcase is full of Queen City noisemakers

Like J Bengoy, DIGGS and, of course, the Dead Shakers

Swimmer, the Pyros and Entrance to Trains

They're sure to fog up the club's windowpanes

For its second year of this yuletide tradition!


Also on Thursday, at the Vermont Comedy Club

Aka B-town's most sidesplitting hub

This time around, they're taking on yule

The team then unwraps them all in our presence

It sounds like a hoot, and a little obscene.


For anyone who's ever had a hankerin' to learn

How to spin records, you should take a turn

Just kidding, it's Half Lounge for sure, don't you know

Sometimes I just need a rhyme for the flow

Speaking of SVPPLY, he has up his sleeve

A slammin' batch of bangers for New Year's Eve


But before we get sucked in to end-of-year fêtes

Swale have a night you won't soon forget

The mainstay rockers are planning for you

A festive and merry musical smorgasbord

You'll be entranced from their very first chord

Join up with Swale, it's gonna be killer

Three nights before Christmas Day you will see

That the Light Club Lamp Shop is the place to be.

A night that's traditionally all about fun

It's the first New Year's Eve without First Night

But now that you've had enough time to mourn

Say hello to Highlight, to the new substitution

It's sure to become a beloved institution

Worked hard to win a new place in our hearts.


For nostalgic punks who miss club 242

There's really no question of what you should do

To remind you of all the best nights that you spent

Thrashing your body at the city's teen center

Make sure you purchase a ticket to enter

There's no freakin' way that you can stand still

For Gallon of Milk, Nick Grandchamp and the People Watchers

The Joke's on Us, Paper Boats and Potentially Lobsters.


Down on the waterfront, there's much to be seen

The ECHO Center and nearby Foam Brewers

You'll have a great time, nothing could be truer

At the brewery, but also at ECHO, a few steps away

A bunch of musicians are planning to play

It sounds chill AF, but just up the block...

Are planning to showcase the fruits of their labors

Consider it a one-stop hip-hop emporium

An art show, fashion show and concert in one

This crew of MCs just gets shit done

There's so much more on the bill for Highlight

I don't even have space to preview it right

As I steer you toward one last occasion.

Of hot entertainment on multiple dates

Kat Wright hits the stage two nights in a row

She brings along some righteous support

Specifically, I am happy to report

Francesca Blanchard and JUPTR on the docket

Plus Upstate and SoundCheck are ready to rock it

You can't go wrong with a lineup this great

They'll get you movin' right out of the gate.


Once again, I must say, this is but a sample

Of entertainment offerings in a region so ample

I hope you find yourself surrounded by friends

As the holiday season comes to an end

Hopefully you'll find something awesome to do

And I hope that none of your plans fall through

Wherever you end up, get there in one piece

I know we all want a cathartic release

Just remember to keep your wits about you

Or else your crew might leave the party without you.

The Lovemakers, "Set Me Free"