Soundbites: Tips for the Band(s) 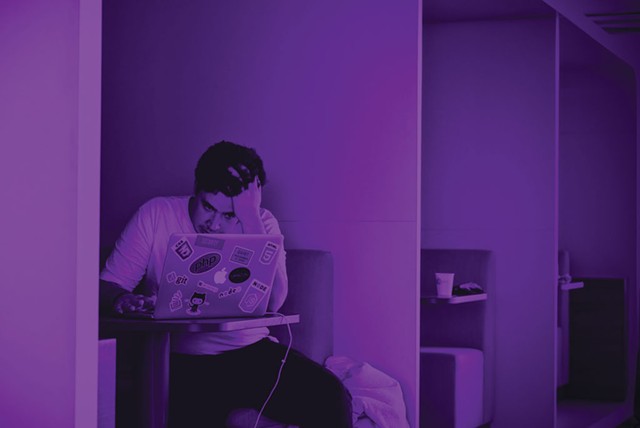 Recently, I received an email from a regional artist looking for coverage opportunities in Seven Days. The person used a particularly unusual phrase: They were looking to set something up that felt "mutual in terms of promo." I had no idea what this person meant by that, so I asked. Their response confused me all the more. The artist said they would be excited "to do something that would create original content for the issue." Say what? Every issue is literally cover-to-cover original content.

Then it dawned on me: The artist probably thought Seven Days was something more akin to Burlington's Noise Ordinance. The online music publication and production company works directly with artists to create original studio sessions and bio videos. Not only does this benefit Noise Ordinance itself by building out its brand and raising awareness for the live events it presents, but the musicians with whom it works walk away with impeccably produced content. They can then disseminate the clips across social channels as promo material. Mutually beneficial, as it were.

Eventually, the artist and I cleared it all up. But it got me thinking: I might have a few helpful things to share with you that I've learned about the back end of music publicity. For anyone seeking a slice of the spotlight, either locally or beyond, here are seven tips that could serve you well in your quest. And if you aren't a musician, I apologize, because this week's column might not be that relevant to you.

1 Know whom you're contacting. Browse a print copy or peruse the website of the outlet from which you're seeking coverage. Does it focus only on artists working in the Chesapeake Bay area? Does it only cover bluegrass musicians? Is there a particular writer or editor who seems to run point on music stuff? If you can answer any of these questions definitively, you're off to a good start.

2 Timing is everything. Figure out whether the publication to which you want to submit works on a cycle. If it's a blog, it probably has some kind of schedule but is likely pretty flexible. If it's a print publication like Seven Days, things need to be planned out further in advance. I'm always shocked when publicists reach out to me for coverage within 48 hours of an event. That's not nearly enough time.

For us, timing is particularly important when we schedule album reviews. Ideally, we look for what we call "time hooks." For example: If you have an album-release show planned, we like reviews to appear the same week, if possible. Since we only publish two reviews per week, reaching out at least four weeks in advance to try to claim one of those slots is smart. But again, schedules will vary from outlet to outlet.

3 Make sure to include all relevant information and that everything is accurate and looks professional. I can't tell you how often I receive emails that don't include the date of the show a singer is trying to promote or links to their new album. It's a bad look.

Spelling and grammar mistakes are a big turnoff, too. Pro tip: Print out what you've written and read it out loud. You'll catch so many more mistakes than if you read silently from a screen. Then have someone else print it out and read it aloud. Repeat until it's perfect.

4 Boasting stats is most likely pointless. I can only speak for myself, but I don't care how many Spotify plays, YouTube views or Twitter followers you have. That information has no bearing on who you are as an artist and likely won't serve editorial content well. On the other hand, if you're trying to license your music for commercial use, you probably do want to mention that stuff. I would imagine marketers and advertisers care a great deal about numbers — and rightly so.

I also don't care with whom you've "shared stages." It's basically meaningless to say you shared a stage with the Black Keys or Father John Misty — unless you were direct support for an entire tour. "Shared a stage" could mean that you and 150 other bands all played the same music festival, which is not super-relevant info.

That's not to say that you should never name-drop. If you remixed an A$AP Rocky track or David Fincher directed your latest music video, definitely mention it, because that's cool!

In short, focus on sharing your artistic accomplishments. Give me links to your best online content. Speaking of which...

5 Have high-res photos. I've mentioned this before because it's especially important for print media.

In my experience, even if you don't have a nice camera yourself, most creative folks at least know someone who does. Hit them up. And if you don't know anyone with a decent camera, even a top-of-the-line smartphone will shoot a decent image in good lighting. A few weeks ago, I snapped some pics of local singer-songwriter/producer Princess Nostalgia with my Droid phone and they turned out great — but a DSLR camera would have produced even better shots.

6 Once you have the images, never embed them in the body of an email. You can attach one or two, but better yet, send them via Google Drive or Dropbox, along with other assets such as press releases, one-sheets, album art, song lyrics, etc.

7 Be personal. Automated services like MailChimp make sending out publicity emails so much easier than doing them individually, but they also strip away the human touch. Speaking from experience, mass emails are way easier to ignore than ones that were written out specifically for the intended recipient.

Also, think outside the box when you make an introduction. Be weird. Be creative — but don't go as far as to write your own album review. You want your writer or reviewer to have just enough to pique their curiosity but not enough so that the narrative is already constructed.

And this is just the tip of the iceberg. There are many more dos and don'ts, some of which my predecessor Dan Bolles wrote about in a January 2015 edition of this column. Definitely check that out, too.

The truth is, there's no surefire way to ensure coverage. You're at the mercy of someone else's tastes, goals and timetable. But if you follow some of this advice, you might have a leg up in a crowded sea of eager creators trying to get their names and music out into the world.

Guordan Banks, "Keep You in Mind"