Soundbites: The Year in Review

The end of the decade is nigh. In just a few days, we'll enter the new roaring twenties. But will it bear any similarity to the oft-fetishized 1920s? I assume we'll be inundated with "Boardwalk Empire"-themed parties and such. Hell, Burlington already has two speakeasies: Deli 126 and Lincolns. St. Albans is also getting in on the secret-watering-hole fun with the recent opening of the Clothier, a swanky new cocktail lounge from Twiggs — An American Gastropub.

However, I don't see rampant chain-smoking, flapper fashions and art deco making comebacks. Maybe if we're lucky, we'll see an end to prohibition. You know which kind I'm talking about.

As is tradition, the last Soundbites column of the year looks back on the previous 12 months to recap the most important music- and nightlife-related news items. And, as always, it was a mix of bitter and sweet.

First, we lost a few charismatic and noteworthy locals. Bassist and fine art photographer Ellen Powell, a fierce voice in local jazz, died of cancer on Tuesday, November 12. And just two days later, popular sound engineer and Advance Music Center associate Kevin Healy also succumbed to the big C. As we have previously noted, on New Year's Day 2019, Seven Days staff photographer Matthew Thorsen finally let go after his long struggle with the disease. In honor of his significant artistic contributions to the paper as well as the city of Burlington, the alley off the Church Street Marketplace between Red Square and Ake's Place was officially named Thorsen Way.

In music venue news, Twiddle keyboardist Ryan Dempsey and others opened Orlando's Bar & Lounge in Burlington at the end of March. The nightclub set up shop in the partially subterranean space that once housed businesses such as Magnolia Bistro, Hector's, Kahiki Moon and Foggy's Notion. It's became the spot for jam music in the Queen City, offering live music more evenings than not. Originally, Maudite Poutine operated a pop-up on the premises, but Smokey's Low N' Slow barbecue has since taken up the munchies mantle.

In September, confectionery Nutty Steph's renamed itself Rabble-Rouser and opened up a new outlet in Montpelier. The shop stages events such as Jazzyaoke, a live-band jazz karaoke event, and Extempo, an eclectic storytelling series.

Perhaps 2019's biggest music venue news came with the Burlington City Council's near-unanimous vote to change South End zoning regulations for industrial spaces. Those tweaks permit Burton Snowboards, whose headquarters are located on Industrial Parkway, to move forward with a planned recreational complex. It includes the new nonprofit Talent Skatepark, dining options and a music venue — namely, Higher Ground. While there's been no official word about whether the South Burlington marquee venue will indeed make the move, it's the obvious contender.

The decision came after numerous members of the South End neighborhood spoke up in support as well as with concern. The latter mostly related to worries about an increase in traffic in the tucked-away section of town. We'll be following that story in 2020.

Speaking of changes, Magic Hat Brewing did away with a long-held tradition at this year's Mardi Gras celebration. For the first time in 24 years, the homegrown beer company did not stage an elaborate parade in downtown Burlington. Instead, all festivities were relocated to Church Street, with street performers, music acts and kids' activities lining the pedestrian thoroughfare. The party was also pushed back several weeks in an effort to avoid frigid weather.

In programming news, Radio Bean overhauled its approach to the ubiquitous open-mic night. Instead of a typical setup, the café unveiled a Monday night series called Open Circuit with themed installments, including traditional singer-songwriter, full band, puppets/cranky show/pantomime, and electronic show-and-tell. And, should a given month have a fifth Monday, open mic became a star-search-style talent show. However, the electronic and full band open mics have since been discontinued.

As per usual, many excellent musicians came to the Green Mountains to perform, chief among them R&B superstar Patti Labelle. The "Lady Marmalade" singer headlined the Burlington Discover Jazz Festival on June 2 on the Flynn MainStage. Also at the jazz fest, New Orleans funk outfit Tank and the Bangas surprise-headlined the Waterfront Tent on June 6 when Alabama soul ensemble St. Paul & the Broken Bones canceled their appearance. (Note: It was epic!)

In other cancellation news, country singer-songwriter Brandi Carlile was forced to end her May 24 performance at the Shelburne Museum mid-show as a torrential downpour and imminent electrical storm threatened the safety of the outdoor concert. After three acoustic-only tunes, Carlile and co. lamentably packed up and went home.

In a massive feat of endurance, composer/activist Daniel Bernard Roumain staged a 24-hour musical protest in front of Burlington City Hall from noon on October 24 to noon the following day. As Seven Days staff writer Margaret Grayson reported, local artists including Paula Higa, Cinse Bonino, the New Economistas and others joined the violinist in his climate-change-awareness demonstration.

The performance was part of Roumain's residency with the Flynn Center for the Performing Arts, the University of Vermont Lane Series and the Vermont Symphony Orchestra. He'll be sticking around in 2020, as well. Roumain can next be seen performing with chamber ensemble TURNmusic on Saturday, February 8, at the FlynnSpace.

In band breakup news, Burlington darlings Julia Caesar called it quits when bassist Katy Hellman and drummer Steven Lebel moved to Philadelphia. Their departure came just as the group was set to release its long-awaited debut album, MARS. Though it's been recorded, the album remains unheard. Will it ever see the light of day? That's perhaps something to look forward to in 2020. 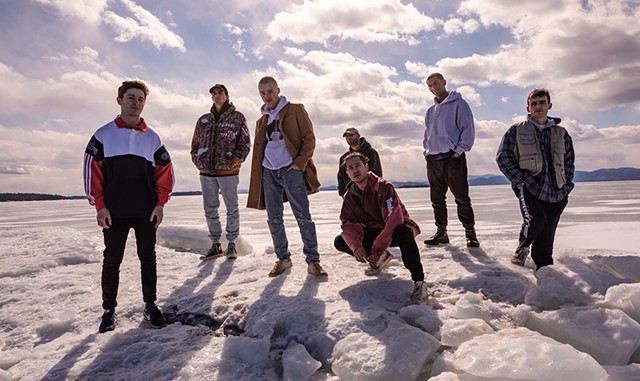 And finally, the year's biggest news came from 99 Neighbors. The Burlington hip-hop crew announced in July that it had inked a deal to release its music exclusively through Warner Music via Pat Corcoran's entertainment group Nice Work. Since signing, the collective has truly begun to blow up, landing on major festival bills such as Something in the Water, Rolling Loud New York and Lollapalooza.

Georgia, "About Work the Dancefloor"

Rina Mushonga, "In a Galaxy"