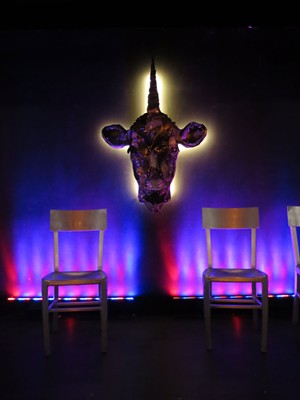 Vermont's comedy scene is one of the state's biggest and most supportive arts communities. Its close-knit nature is understandable, given how vulnerable you have to make yourself to do standup, improv and/or sketch comedy. Think about it: Improvisers get onstage with nothing planned. Sure, they rehearse and hone their craft just like any other artist. But so much is left up to chance. Many people, myself included, are terrified of such uncertainty. And surviving such terror can only bring people closer together.

With that in mind, I'm happy to announce your chance to witness the first-ever, comprehensive Vermont Comedy Awards! This is a chance for members of Vermont's comedy community to honor each other through extremely niche, in-depth categories that no one but seasoned improvisers, comedians and sketch comics could dream up. For instance, honors will be given for most physically strenuous joke, best poop/fart joke, joke with the longest walk, most memorable improv scene, best stage presence and most self-deprecating person, to name a few.

If you want to find out who wins best improv team, biggest bomb, joke you can't believe they got away with and dozens of others, plant yourself front and center for the awards show at the Vermont Comedy Club on Sunday, November 18. In addition to the actual awards, expect to see special performances, standup sets and a facetious in memoriam presentation. The evening doubles as a third anniversary celebration for the club.

"Overall, it's about appreciation and being grateful for all the people in the scene and what they bring to the table," VCC co-owner Natalie Miller tells Seven Days via email.

Also, word on the street is that the club's "unicow" mascot — the glittery horned bovine that adorns its stage — will finally be given an official name. I'm sure it's a moo-t point, but I have a few I'd like to suggest: Sparkle Moo-tion, the Pointer Sister, Mother Udder, Dirty Jersey and Stabby the Cow.

On Thursday, November 15, "free-bleeding" indie rockers Julia Caesar host a special show called "The Ides of November" at Cold Hollow Contracting in Burlington. The band released its debut EP, Heavy Flow, earlier this year but has been relatively quiet otherwise — at least since its righteous set at this year's Grand Point North music festival.

Now, the quartet seems to be entering a new phase. In a recent Facebook post, JC announced that not only have they been working on new material but they've been retooling their established repertoire. The upcoming show highlights new acoustic arrangements of previous tunes as well as brand-spankin'-new pieces.

We can expect some of the new work to appear on the group's forthcoming full-length album, due out at some point in 2019. Until then, revisit the EP and accompanying music video for "Crimson."

Two new singles worthy of your attention dropped this week, and each comes with a hot music video. Twiddle front person Mihali Savoulidis brings us the first. Titled "Fading State," the politically conscious, reggae-infused jam debuted with a fully animated video. In it, a cartoon Savoulidis spreads good vibes to a bunch of crusty, Supreme Court-lookin' judges. If only his cartoon likeness could transfer his powers to the real Savoulidis...

Nahko Bear of Nahko and Medicine for the People contributes a verse, as does singer-songwriter Trevor Hall. The single precedes Savoulidis' upcoming solo record, which we can expect next year.

The second track, "Road Words," comes from a Burlington-based supergroup of sorts dubbed the Blue Home Bistro. The collaborative outfit features members of indie-rock bands Full Walrus, LEAN TEE and the Thursday Torys. Brayden Baird of the Thursday Torys tells Seven Days via email that the cut is a one-off creation and that we shouldn't expect more from this particular assemblage anytime soon. And that's a right shame, because the tripped-out track and video are both full of psychedelic, flower-power goodness.

Burlington's next Guerrilla Queer Bar Takeover is Friday, November 16. If you recall, the somewhat secretive event turns an unsuspecting watering hole into the site of a one-night-only queer space. As always, the location is kept under wraps until just a few hours before hordes of people are expected to show up. Follow the event on Facebook for updates.

Of note, you can now pitch a space for subsequent takeovers. Check the Facebook event for a link to a brief survey. It asks which bar you think the guerrillas should commandeer next and why, as well as whether the venue is both physically and financially accessible to a wide range of potential participants.

Seven Days recapped the first takeover back in August. Read about it at sevendaysvt.com.

The T Sisters, "I Have a Hammer"

Honeycut, "The Day I Turned to Glass"