Return of the Hack

It's been just shy of two and a half years since I filed what I thought would be my last Soundbites column for this esteemed paper. Not that I'm counting — OK, I might be counting — but that's roughly 120 issues in which my byline has not appeared atop the music column in Seven Days. And I've gotta tell ya, it's been glorious.

Not that I didn't enjoy being the Seven Days music guy for a decade or so, because I surely did. We had some good times together, right? Still, when the time came to pass the pen to someone else, I was ready. And I've quite taken to my rock-writer golden years, thank you. Not feeling like I need to be out at 11 p.m. on a Tuesday to catch some new band's set has done wonders for my disposition, not to mention my boyish complexion. And bouncing around the likes of Waking Windows or the Burlington Discover Jazz Festival as a civilian has been a delight — though it comes at a cost.

As I told a coworker recently, "I'm woefully out of the loop" on what's fresh in the local scene. She misunderstood and thought I said willfully out of the loop, which might not have been far off the mark. I was mostly joking — I do still edit the music section, after all, and I chip in with the occasional album review or feature. However, like an aging pitcher, my fastball is probably not what it used to be, at least for the purposes of this column.

But a funny thing happened on the way to the retirement home: Music editor Jordan Adams took a long-overdue vacation and asked me to fill in for him. To quote Michael Corleone in The Godfather: Part III (and please read in your best Al Pacino voice): "Just when I thought I was out, they pull me back in!"

And so here we are, together again, just like old times.

Here's something that's not new: going to see one of your favorite bands in concert and being bewildered, bordering on offended, when no one else shows up.

That was the case last year when Charlie Frazier went to see blues giants Sugar Ray Rayford and Danielle Nicole at Higher Ground. Frazier, the longtime leader of the local band Blues for Breakfast and DJ of the WIZN radio show of the same name, was dismayed by the embarrassing turnout. So he did what any self-respecting modern fan would in a similar situation: He bitched about it on Facebook.

Rare is the social media rant that actually leads to action. But Frazier's was the exception. He and fellow blues brothers Dennis Willmott (Left Eye Jump) and Sandy Combs — the hepcat who raised the money to build the Big Joe Burrell statue on Church Street — put their frustration to good use, reconstituting the long-dormant Vermont Blues Society in an effort spread the word.

In an email to Seven Days, Frazier, aka Mr. Charlie, writes that he was inspired — or, as he put it, "goaded" — into action by a similar organization across the lake founded by his friend Laura Carbone: the Plattsburgh Blues & Jazz series. According to Frazier, PB&J shows regularly draw 100 to 150 attendees, which is impressive given the disparity in population between the Lake City and the Queen City. The shows also always feature peanut butter and jelly sandwiches, which likely helps the draw. (OK, I made that part up. But they totally should serve PB&J at PB&J, amirite?)

Frazier explains that the VBS was a vibrant and active group back in the early 1990s, but it eventually "withered on the vine." Part of that withering was due to folks just not wanting to hustle to get the word out, which back in the day meant, like, talking to people and hanging show posters and such. Enter the internet.

Between its website and Facebook page, the VBS serves as a clearinghouse for blues news in Vermont. It maintains a calendar of blues shows around the region and is a great resource for blues fans in the Green Mountains in general. The group, which hopes to eventually launch outreach and education programs around the state, is a registered nonprofit and affiliated with the Blues Foundation, an organization that champions the blues on a national level. (BTW, the Blues Foundation honored Frazier with its Keeping the Blues Alive award in 2016, and it's easy to see why.)

This Sunday, May 19, the VBS throws its official coming-out party at the Double E in Essex Junction. The late-afternoon/early-evening shindig starts with a mixer and music by guitarist and Saint Michael's College music prof Bill Ellis. An informational summit follows, capped by a blowout blues jam with Willmott, Bob McKenzie, Tom Buckley, Jeff Salisbury, Cooie DeFrancesco, local British bluesman Tom Caswell and many others.

Plus, it should all be over in time to catch the inevitably disappointing conclusion of "Game of Thrones," after which we'll likely all have the blues. 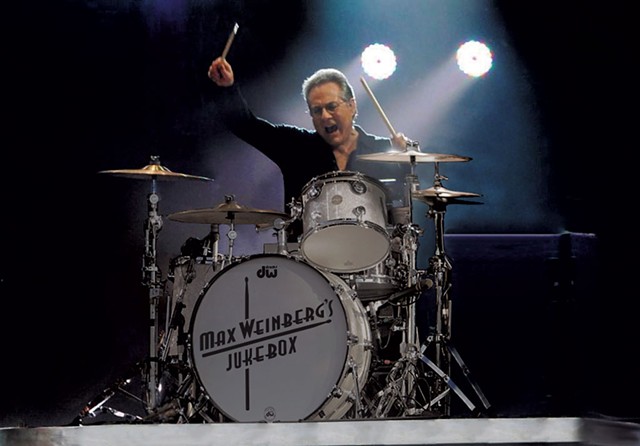 Speaking of the Double E, on Saturday, May 18, the hot spot hosts Max Weinberg's Jukebox, a unique interactive show featuring the E Street Band drummer and former "Late Night With Conan O'Brien" bandleader. Here's how it works: Audience members choose the set list from more than 300 songs, and then Mighty Max and his crack band play 'em — kinda like a human jukebox, see? The show costs more than a quarter, but I'm guessing it'll be worth it.

Twiddle-heads take note: The band has partnered with Burlington's CashorTrade to make the company its official secondary market ticket broker. For the uninitiated, CashorTrade operates an online market where fans can buy or exchange tickets for face value. Also for the uninitiated, Twiddle are an insanely popular local jam band. They're also the second big-time act to partner with CoT, following guitarist Billy Strings, in an effort to curb predatory scalpers. Keep that in mind when you're looking to score tix for TumbleDown at Burlington's Waterfront Park this summer.

In comedy news, local standup Kathleen Kanz hosts an intriguing show this Friday, May 17, at Half Lounge in Burlington. It features comedian and Moth StorySLAM winner TreVor Wade and their storytelling and comedy show "Clownfish." The hourlong piece is an insightful and often hilarious exploration of gender, sex and relationships, among other things. Or, as Wade writes in the show's press materials, "It's honest as all get-out, glam as Hell, as weird as America, and also happens to rhyme. I promise not to disappoint (unless you're my dad)."

Sadly, I don't share Jordan Adams' superpower to get songs stuck in others' heads — and for that I'm thankful, 'cause I hate it when that happens. But here are some releases I've been enjoying of late. Follow sevendaysvt on Spotify for weekly playlists with tunes by artists featured in the music section.

Rhiannon Giddens, there is no Other

Judy and the Jerks, Music for Donuts EP