Soundbites: The Soundbites and the Fury

I'll be honest: It feels a little — OK, a lot — disingenuous to go about business as usual this week. Like I imagine many of you are, I'm having a hard time ginning up enthusiasm for doing ... well, much of anything, least of all writing the typical jokey Soundbites column. What I want to do is rant and rave. Or cry and go back to bed. I've been searching for solace amid the long, looming shadow of Donald Trump's America. That's been in exceedingly short supply this week. But I've found that it exists, at least in small doses, if you know where to look.

I have found solace in an old friend's kitchen, discussing politics while she fed her young son and patiently attempted to coax the word "Dada" out of him — he's kinda stuck on "Mama" at the moment, but he's trying.

I've found it in a long talk with my father, a man whose compassion and intellect I profoundly admire. I have found it in my dear, elderly dog, who rests his head gently on my lap as I write this, as he has for most of the columns I've penned over the years.

I have found it in the warm embrace of another dear friend on a cold night in a South End parking lot while Patsy Cline played somewhere in the distance. I found it playing Farkle with my goofy nephews, who are somehow way better at that old bar dice game than a 4- and 7-year-old should be.

And I have found it in music and in our local music community.

In times of cultural crisis, we often turn to artists, if not for answers then for compassion, understanding and a sense of belonging. That's true on a large scale — look back no farther than the music, film and literature of the Vietnam War era, for example. But it's true close to home, too. It's not hyperbole to suggest that our local artists will play a critically important role, serving as an emotional foundation and moral compass, for the months and years ahead.

Take, for example, the work of Jeffrey Ellis, aka Mycelium MC. For several years now, the local poet and rapper has organized a monthly-ish event called Word!Craft. Held in various locations around the state, the series is intended as an inclusive celebration of words, both written and spoken. It features poets, rappers and writers of all backgrounds and abilities coming together to share their thoughts, experiences and art. Though it's not part of the Word!Craft series, this Friday, November 18, Ellis has organized an event with similarly supportive aspirations: Central Vermont Stands With Standing Rock.

The alcohol-free show takes place at Christ Episcopal Church in Montpelier and features a wide array of activities and entertainment, from acupuncture and massage to a water ceremony and an ecstatic dance. The evening closes with appearances by some of the state's finest conscious hip-hop artists: Boomslang, Self Portrait, expat Colby Stiltz, the Ecotones and Forest Gray.

Proceeds from the event will be sent to companies that are building yurts at the Standing Rock reservation in North Dakota. Ellis and co. will also accept donations to help with travel costs for those looking to join the pipeline protests there. Additionally, they'll accept warm clothing, canned food and dry goods to aid local First Nation citizens.

You can find evidence of artists' impact on our community in subtler ways, as well. Take, for another example, Swale's Amanda Gustafson. When she's not co-fronting one of Burlington's most admired bands, she's a teacher at a local elementary school with a significant refugee population. The day after the election, she invited her friends on social media to mail letters and drawings of support to her students, many of whom now fear for their future and safety here. It was a small but powerful gesture. And it was shared many times over on social media by those desperately looking for some way to help.

The letters began arriving early this week. "And there are lots of joyful tears," says Gustafson.

But as Gustafson points out, there are refugee students and students of color in every school in the city — and all over the state — all of whom need our support. If you're so inclined, you are encouraged to send letters to Dan Bolles, c/o Seven Days, 255 S. Champlain St., Suite 5, Burlington, VT 05401, and Gustafson will distribute them to schools in Burlington.

Outside the Burlington area, you could also contact your local school to ask what you can do to offer your support. 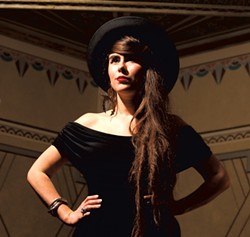 But art and action don't need to be explicitly political to have great power. And here I'm thinking of one Kat Wright.

The rosy leader of the Indomitable Soul Band was the subject of last week's Seven Days cover story. We didn't plan it this way — in fact, we ran the story a week early due to a scheduling quirk. But it did not go unnoticed in our office that, on the day after America would ostensibly elect its first woman president, our cover would picture a strong, passionate and talented young local woman. We thought it would be a stroke of serendipity. We were wrong.

Typically, when your band is featured on the cover of this paper, it's cause for celebration. But I can only imagine Wright's pride was dimmed, if not outright shattered, by seeing her face on newsstands around the state while so many around us despaired.

I can imagine her feelings because, as the writer of that story, I felt somewhat embarrassed myself. Not because Wright and her band were undeserving of the spotlight. But because it seemed frivolous to focus on music when so many were suddenly experiencing real fear and pain.

But here's the thing — and I direct this at Wright as much as everyone else: I have heard from numerous people, in person and online, who genuinely appreciated seeing her beaming face everywhere last week, especially given the tumultuous backdrop. One friend told me, "Seeing such a bright and beautiful person every time I went to the grocery store were about the only times I've smiled this week."

Just wait until you get a load of their new record, which comes out this Friday, November 18, the same day the band plays the Higher Ground Ballroom in South Burlington. I can tell you it's next to impossible to listen to By My Side and not feel at least a little better about the world. It's a beautiful and affirming record, and it couldn't come at a better time.

I write all of this not to suggest that things are going to be OK. For one thing, I don't know that to be true. Instead, it's my hope that by offering a few samples of good things happening in our community — musical and otherwise — it might provide some small shred of solace.

As Leonard Cohen put it: "There is a crack in everything. That's where the light gets in."