Soundbites: The Skinny on Backside 405 and Alfie's Wild Ride 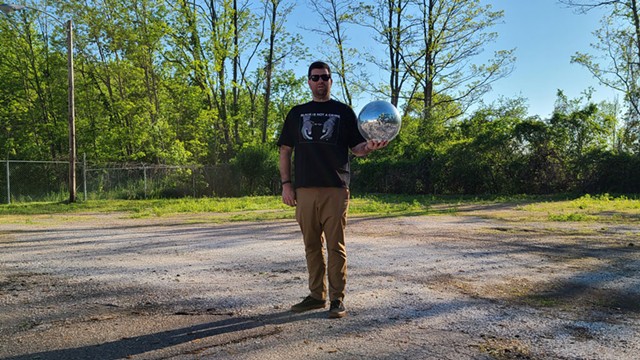 The apprehension I feel about summer has me all knotted up, and there's only one cure. To quote Liz Lemon: "I need to dance this out." Obviously, "this" refers to the pandemic-era tension and the uncertainty that still looms large over the live music and events sectors. Luckily, anyone who needs to shake it until they break it will finally get the chance to do some dirty dancing this weekend at a new pop-up party in Burlington's South End.

Announced on Tuesday, Backside 405 is a new weekly, summerlong event series from Higher Ground and Burlington City Arts. Kicking off this Friday and Saturday, May 29 and 30, the 500-capacity ragers are set to take over the parking lot behind BCA Studios at 405 Pine Street. DJ Disco Phantom takes the decks for the inaugural show on Friday, with surf-rockers Barbacoa and psych-rock trio Quiltro the following night. (Read the review of Barbacoa's new record here.)

"Since most indoor venues (including HG) aren't reopening in earnest until the end of the summer, we wanted to provide a summer stage to artists who are hungry to perform again," Higher Ground co-owner Alex Crothers wrote in an email.

Each Backside 405 event will feature one or two artists, probably locals, who'll jam as much musical madness as possible into the brief window of 8 to 10 p.m. (That's a hard curfew, by the way.) Gates open at 7 p.m. so revelers have time to hit up on-site food trucks and a full bar before things get going. Tickets prices will land in the $10 to $15 range. Season passes are also available for $99.

The events are rain or shine and feature a covered stage. Since the artists and their equipment will be protected from the elements, I doubt a little rain is going to prevent fun-seekers from having a good time. In fact, a sudden downpour on a hot summer's eve could ratchet up the debauchery. Maybe plan ahead and pack your valuables in plastic if the forecast predicts showers.

As the premier concert venue/presenter in Vermont, Higher Ground has led the way in adapting live music during the pandemic. Last summer, its drive-in series at the Champlain Valley Exposition in Essex Junction offered a fun escape from quarantine, albeit one that came with a few caveats. Safety precautions meant that folks were expected to stay in their pods. And tickets were sold by the carload, with a price tag often reaching close to $100 a pop.

"Combining an easy-to-access downtown location (with plenty of free car and bike parking) with reasonable ticket prices, our goal is to create opportunities for artists and audiences to reconnect with live music," Crothers continued.

The new series will be the closest to pre-pandemic entertainment we've seen in more than a year, in terms of capacity and normalcy. A Backside 405 press release notes that all Vermont Department of Health safety guidelines will be followed. Masks will be encouraged but not required, according to the release. After all, the event is outdoors, and Gov. Phil Scott recently declared that fully vaxxed Vermonters can go maskless in most situations.

Those wondering about masking in Burlington might be confused by this. The city council recently decided to push ahead a vote to lift the citywide mask mandate until June 7. But the mandate applies only to retail establishments and city buildings. Other spaces that are open to the public, indoors and out, fall under the state's guidance. Currently, the state requires only unvaccinated people to wear masks.

Also included in the state's guidance is a note about verifying whether someone is vaccinated and how that relates to an event's capacity. It reads, "If an event has no way of determining if an individual is vaccinated, assume all are unvaccinated for capacity limit." That guidance sets an outdoor event's capacity at 900, almost double what Backside 405 intends.

Scott also said during last Friday's press conference that once 80 percent of eligible residents age 12 and up receive at least one dose of vaccine, he's going to drop all pandemic restrictions. He was already planning to do so by July 4, if not earlier. With 74.9 percent already vaxxed by last Friday, it seems likely that we'll hit 80 percent before Independence Day.

The Garage Is Not What It Seems 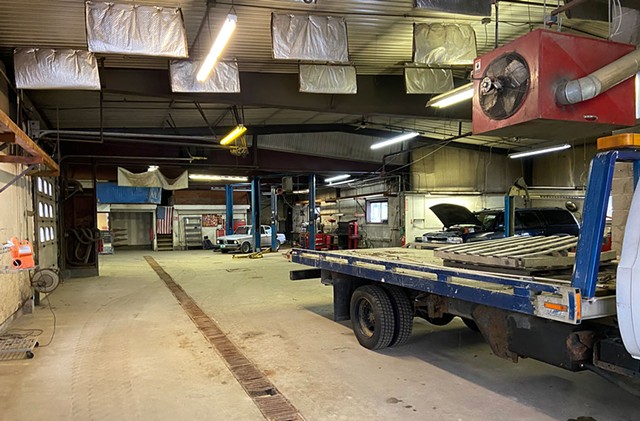 A new live music venue is opening in Stowe. A bar, nightclub and all-around hangout space called Alfie's Wild Ride is taking over the former site of Madadashcar, an auto repair shop at 942 Mountain Road. Owners Chris and Beth Oleks began proceedings with Stowe's Development Review Board in February to rezone the space. Beth also owns and operates the Stowe Public House & Bottle Shop, and Chris was briefly principal of Stowe High School. The couple is aiming for a late June or early July opening date.

"When we came in here on March 1, it was a full-on auto body shop, with three two-post lifts, a four-post lift [and] a paint booth," Chris said by phone. "We had a ton of cleaning and sandblasting and all sorts of stuff to do to get the space even cleaned out and prepped."

Alfie's will have a 50-foot bar and a Mexican street food kitchen (see Melissa Pasanen's food news). During the summer, the shop's garage doors will stay open, "keeping the garage feel to it," Chris said. In addition to libations, food and live events, Alfie's will feature state-of-the-art golf simulators, other video games and a 25-foot-long shuffleboard table.

"We had thought about doing an event space/really fun bar ... with the idea being, in the wintertime when there's not a ton to do at night, having a ton of games and hangout spaces and music and all sorts of stuff for people to do," Chris said.

Because things are changing so quickly regarding indoor and outdoor capacities, Chris didn't want to speculate on exactly how many heads the venue would hold. But it's safe to assume the 8,200-square-foot space will accommodate a good number of people, both indoors and on its patio. 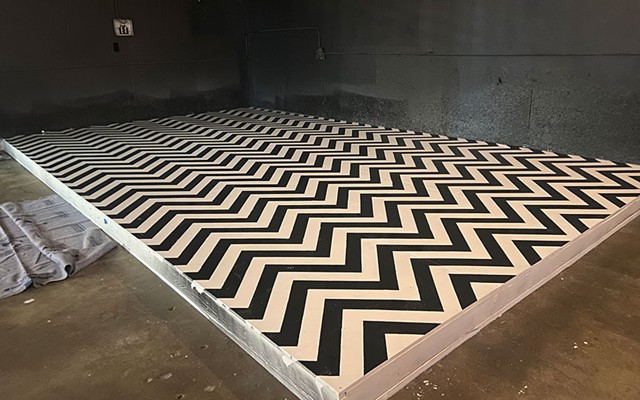 Perhaps the coolest part of Alfie's is the 450-square-foot stage, which Chris said they constructed to resemble metaphysical nether zone the Black Lodge from cult TV show "Twin Peaks." Its herringbone pattern was hand-painted and will soon be adorned with the iconic red velvet curtains seen on the show.

Former Rusty Nail comanager Dave O'Connor is working with the Oleks on the new venue. Alfie's is partnering with Nectar's for its music offerings, as did the Rusty Nail when O'Connor managed it in the mid-2010s.

O'Connor noted that Alfie's will be "the only place" in the Stowe area equipped to accommodate national touring bands. "Coming out of [the pandemic], there's going to be an opportunity for a reinvigorated music scene," he said.

Beyond music and entertainment, Chris said Alfie's is "meant to be a creative space for artists," noting he plans to use the space as a gallery.

One last thing: If you're wondering about the new hot spot's unusual name, there's a story behind it. According to Chris, Alfie was a guy "who crashed his Jeep down a 200-foot hill into our backyard" when he and Beth were living in Topanga, Calif.

"He had forgot to put the parking brake on, and he jumped in to hit the brake as he was heading down the hill [from a nearby property] and went over the cliff," Chris said. "We had always referred to it as 'Alfie's wild ride.'"

Remarkably, Alfie survived the drop. But the couple continued to find the contents of his car — tools and such — in their backyard for years afterward. So the name also winks at the venue's former life as an auto shop.

Sinead O'Connor, "Nothing Compares 2 U"

Roxette, "It Must Have Been Love"