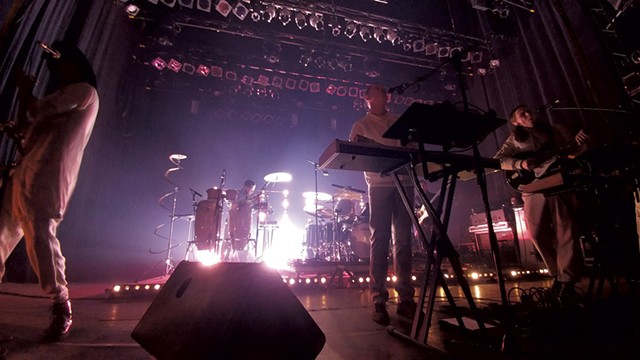 I did something the other day that I hadn't done in well over a year: I bought concert tickets. If all goes as planned, I'll head down to Boston in early October to commune with British electro-soul outfit Jungle, my current favorite band to see live. I'm beyond stoked, especially because a dear old friend of mine moved to Boston during the pandemic. I can't wait to impose on her this fall.

I imagine I'll have seen plenty of live music before then. (More on that below.) But it's appropriate for my first ticket purchase of the (hopefully) late-pandemic world to be Jungle. Truth be told, I've bought tickets to see them four times. But through a combination of my own poor planning and forces beyond my control, I've only managed to see them twice. My alternating one-to-one success/fail ratio predicts good things for the show in October.

More than any band's live performance I can think of as I write this, Jungle's activates for me what moral psychologist Jonathan Haidt calls "the hive switch" in his 2012 book, The Righteous Mind: Why Good People Are Divided by Politics and Religion. Of humans' mostly self-centered nature, he wrote, "We have the ability (under special conditions) to transcend self-interest and lose ourselves (temporarily and ecstatically) in something larger than ourselves."

There is no better way to describe what I feel when I see a mind-blowing show. For secular types like me, who are also not interested in sports, live music is one of the only ways to achieve the feeling of oneness with a group of strangers. And I miss it like crazy. The only time I've felt it in the last 12 months was on Saturday, November 7, when the Associated Press called the 2020 U.S. presidential election for Joe Biden and people poured into the streets of Burlington to celebrate. 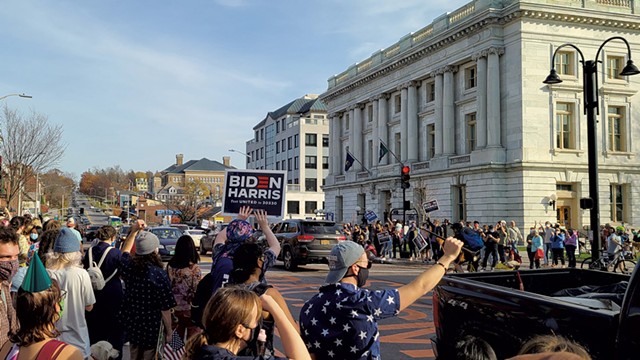 So what happens when we're all able to start seeing shows again? I don't mean the outdoor, scaled-down, socially distant kind we enjoyed during last year's warm-weather months. Those were a nice and much-needed stopgap, especially for out-of-work musicians.

I mean the unbridled, pre-pandemic kind of shows, the ones where you're pressed up against each other, with strangers sweating and breathing all over you, ponytails occasionally brushing your tongue as their owners whip their heads back and forth. We've all been there, am I right? No? That's only happened to me?

I admit to feeling a fair amount of reentry anxiety regarding concerts. Piggybacking on what etiquette expert (and my former grade-school classmate) Lizzie Post discusses as part of this week's package of stories about reentry anxiety — see "Social Graces"  — I'd like to propose the Seven Rules of Concert Etiquette.

We all could use a refresher course on being good club kids once we start packing ourselves into crowded venues again. These are rules we should have followed before the pandemic, too. But they're especially important to keep in mind as we all figure out how to access our hive switches after so much time apart.

Rule One: Center of Attention

This is the most important rule, and it probably goes without saying. But I'll say it anyway: At any given show, you are not the only one having a good time. How you choose to celebrate and express your feelings affects the people around you. Find a balance between giving into your pleasure centers and being courteous to the other people who paid to be there — not to mention the people onstage.

It's hard enough to work in a party atmosphere, and no one wants to be a party pooper. Plus, the staffers you're likely to interact with are not the ones setting the rules. They just enforce them. If security or other employees ask you to do something — or, more likely, not do something — just comply. If you really have problems with new rules and regulations, email the club's general manager the morning after.

This one might sound weirdly specific, but stay with me. Silence makes some people feel uncomfortable and awkward to the point where they just have to break it by hooting or otherwise making noise. Resist that urge. If the performer is taking a moment to be quiet, for any reason, don't be the jerk who has to fill that silence. I've seen this happen too many times, especially when the person onstage is female.

Bands make more money from merch sales than anything else. Though not everyone will always be financially able, concertgoers should try to factor in a merch purchase with their nightly budget. And bands should consider offering at least one affordable item, such as stickers or pins. Not everyone can afford to buy a $40 T-shirt every time they go to a show. And if you can, maybe buy two.

If you need to constantly talk to your concert buddy the entire time the band is onstage, I first question why you are even there. Most people who ensure a prime place in the crowd are there to listen to the music, not to hear your thoughts on how post-punk is representative of the larger punk movement. If your thoughts are simply too hilarious and insightful to stay locked up in your head until the end of the set, please do us all a favor and stand in the back.

This one might be the most controversial. If you're at a seated show, it's probably best to stay seated. There are some exceptions to this, however. If the artist onstage invites a seated crowd to stand — like Victoria Legrand did when Beach House played the Flynn in August 2019 — then it's OK.

But keep in mind that not everyone is physically able to stand at shows. By getting up on your feet, you might be obstructing the view of someone who can't compensate by also standing up. This relates back to Rule One. Just because you want to stand up doesn't mean the person sitting behind you does.

If the person behind you is already up on their feet, then it's OK to join them. Hopefully they aren't blocking anyone, though. You can see how there's kind of a domino/house of cards effect at play here.

(The best kinds of venues are like the Fox Theater in Oakland, Calif. Anyone who wants to stand buys a floor ticket. Those who want to sit snag seats in the loge, mezzanine or balcony sections. Everyone wins; no one compromises.)

Music fans are going to be in a frenzied rush to see shows again. I predict more shows will sell out in advance, and much earlier than before. This will likely lead to an explosion in the secondary market, which comes with its own set of precautions and considerations.

Ticket holders looking to offload seats to sold-out events are likely to feel the urge to jack up prices, as was always the case. And concert-starved audiences might be more likely than ever to pay whatever it takes — even if that means paying 200 percent of face value. How about we all decide to be good humans and not rip anyone off?

In fact, there's a great way to deal with unwanted concert tickets right in our backyard: secondary marketplace CashorTrade, a Burlington company that connects ticket holders with ticket needers. All tickets on CashorTrade are sold at or below face value.