As the old chestnut goes, all good things must come to an end. And this Saturday, December 3, after a 30-plus-year run as the oldest all-ages punk club in the country, beloved basement haunt 242 Main will host one final, sweaty, punk-rock bacchanalia ... at least for now.

While the show is billed as "The FINAL 242 Main Show/Gary Lane's 50th Birthday" — the caps are not mine, sorry to shout — it is far from a certainty that we've reached the end of the 242 era. As long as the City of Burlington continues to ponder what to do with Memorial Auditorium, the decaying monolith that houses the club, there is hope that the future of 242 Main will figure into those plans. As mentioned last week, Big Heavy World's Jim Lockridge, among others, is doing his best to ensure that city officials don't forget about the teen center-turned-punk haven. We'll be following that story closely in the months ahead. For now, we can assume that Saturday's show will be the last at the club for a while.

(A quick aside: Let's say 242 Main does reopen in a few months. Does it still get to claim the mantle of the oldest all-ages punk club in the country? Or do we have to restart the clock and cede that title to 924 Gilman Street in San Francisco?)

And what a show it should be. The daylong affair features 21 bands, including some of the finest local hardcore and punk acts around. Among the highlights are ferocious gloom-metal band Reverser, doom-punks Doom Service, emo stalwart Tyler Daniel Bean, legendary BTV punk originators the Wards, vowel-challenged hardcore heroes CBRASNKE, pop-punk whiz kids Better Things, stoner-metal chameleons Vultures of Cult, sons of Death Rough Francis and Rutland hardcore champs Get a Grip. Y'know, to name a few.

Headlining the show are heralded Burlington hardcore heavyweights My Revenge! (If you want to kill five minutes staring into the dark void that is the internet, check out the band's marked-for-deletion Wikipedia page. In short: holy shit.) Fun fact about My Revenge!: Long before they became one of Vermont's most visible heavy-music exports, they played their first-ever show at 242 Main in July 2001. I'll go out on a limb and guess that most, if not all, of the bands on Saturday's slate also had their first gigs at the club — or at least a few of their earliest and most formative.

That's important to note and hopefully something that our civic leaders will consider as they mull the club's future. So, here's a challenge to those folks: Name your favorite local band. I will bet you a lifetime supply of free newspapers that at least one of the members of that band has a strong connection to 242 Main. If you care to take me up on the offer, email dan@sevendaysvt.com.

If you are a rock musician who grew up in or around Burlington over the past 32 years, chances are that 242 Main was your first exposure to the music scene — as a fan or a performer, or both. It's impossible to count how many local musicians got their start on that dingy stage. I'm going to guess that topic has come up in the interviews that local filmmaker Bill Simmon has been conducting recently for his forthcoming 242 documentary. And, yes, he and his camera crew will be in attendance at the show. So, if you go, make sure your mohawk is looking tight. 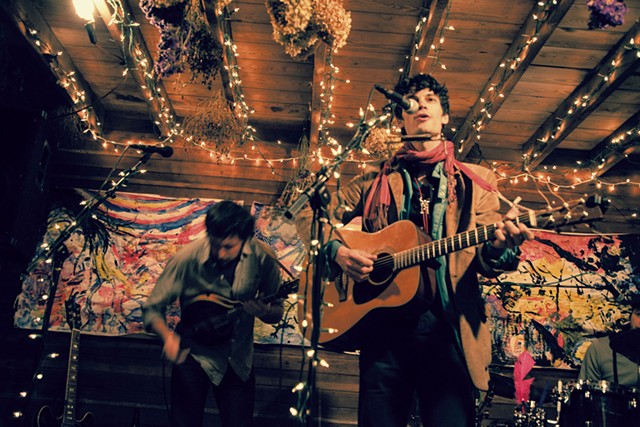 We haven't heard from Avi Salloway in a while. That's probably because the Burlington expat, formerly half of beloved local duo Avi & Celia (and, later, the band Hey Mama), has been a tad busy. He's been touring the globe with Tuareg guitar sensation Bombino, helping to bridge cultural divides between Israeli and Palestinian children with the nonprofit music advocacy group Heartbeat, and spreading the musical gospel of loving thy neighbor with his worldly rock band Billy Wylder.

Most recently, Salloway spent time at the Standing Rock Sioux reservation in North Dakota, as part of the ongoing oil pipeline protests there — rumors of whether he was actually walking on the water there remain unconfirmed. Salloway was part of a local contingent that traveled to the site with 350 Vermont, a grassroots organization dedicated to fighting climate change through, in part, reducing dependence on fossil fuels.

This Friday, December 2, Salloway and Billy Wylder will play a benefit for 350 at ArtsRiot in Burlington, alongside local songwriter Bow Thayer. The show will include presentations from 350 Vermont members who were at Standing Rock. Look for an interview with Salloway about his North Dakota visit on the Seven Days arts blog, Live Culture, on December 1.

New band alert! Burlington, say hello to EVNGwear. This funky fresh quartet came together during a run as the house band for the long-running, weekly Family Night jam series. Formerly held at the Halflounge Speakeasy in Burlington, the event has moved around the corner to SideBar. And it's kind of a who's-who of local funk, rock and blues players, including bassist Alex Budney (Seth Yacovone Band), drummer Ethan Snyder (Whoarfrost), guitarist Walker Allen (Nico Suave & the Bodacious Supreme) and keyboardist Eric Maier (Madaila).

So, what sorts of sonic shenanigans do EVNGwear indulge in? That's hard to say, mostly because no one has ever heard them. But, according to a recent press release, they trade in "modern improvisational music that is kinetic, tight and dynamic." Also: "Rooted in the fusion tradition, the four-piece strives for compelling, spontaneous interaction." Translation: heady jamz, yo.

If that sounds like your thing, swing by the band's debut performance this Friday, December 2, at Citizen Cider in Burlington as part of the cidery's monthly Late Nighter music series.

Speaking of heady series, the next installment of Greg Davis' fascinating Signals series is slated for this Saturday, December 3, at the Hood Plant in Burlington. The featured performer is Seattle electronica composer Norm Chambers. He's achieved global renown for his Panabrite project, a multifaceted musical exploration that merges a wide array of disciplines and influences. These include everything from early New Age music and minimalist composition to electronic and tape music to soundtracks and field recordings. Translation: heady jamz, yo. Or perhaps more accurately: heady, ambient jamz, yo.

As always, an artist Q&A follows the performance. I'm guessing you may have some questions.

In other news, a tip of the hat to my alma mater, Champlain Valley Union High School. This Sunday, December 4, the Home of the Redhawks — they were Crusaders in my day — hosts Grammy Award-winning saxophonist and Blue Note recording artist Joe Lovano. Acclaimed vocalist Judi Silvano joins the sax man. Backing the duo is a truly top-notch contingent of locals, including pianist Tom Cleary, bassist Clyde Stats and drummer Gabe Jarrett. Mandolin whiz Jamie Masefield opens the show, which is a benefit for Responsible Growth Hinesburg. For ticket info, check out flynntix.org.

Last but not least, welcome back, James Harvey. Or rather, James Harvey's trombone. Due to dental issues, the local jazz legend hasn't been able to play it for a dozen years. He's been making the rounds on piano, of course. But local audiences haven't heard the man on his primary instrument in a long time.

I'm delighted to report that's about to change. Harvey has resolved his mouth matters and, on Wednesday, November 30, will play his horn with a trio at Juniper in Burlington.