Soundbites: The Cautionary Tale of SeepeopleS 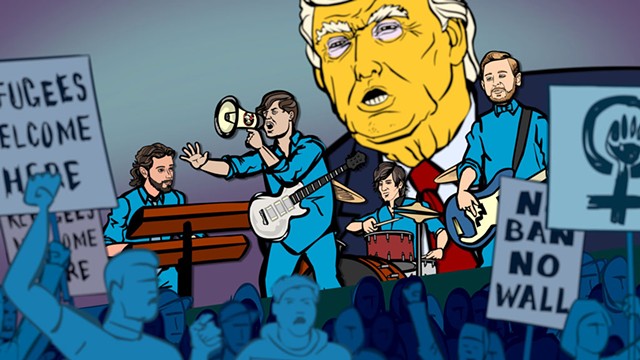 Howdy, folks! This week, I want to turn your attention to a show happening on Thursday, April 25, at the Monkey House in Winooski. Eclectic Portland, Maine, art-pop band SeepeopleS headline. I'm specifically pointing this out because the group stands as a cautionary tale to anyone who operates a Facebook page. I'm not talking about private profiles — though it's possible that what happened to SeepeopleS could happen to personal accounts, as well.

Anyone who's used Facebook to promote their band, product, business or other organization knows that the social media monolith doesn't make things easy. For instance, if you want to ensure that followers see your posts, you have to throw down some cash. But beyond that, working within Facebook's community standards can be a whole other can of worms.

SeepeopleS front person and songwriter Will Bradford found out how punishing it can be when Facebook began blocking the band's posts. It all started after he uploaded the music video for the group's 2017 pop-punk track "New American Dream." The satirical animated clip, which "Celebrity Deathmatch" animator Pete List created, contains severe, outlandish depictions of world leaders such as President Donald Trump, Vladimir Putin and Kim Jong-un mashed up with images of drone strikes, executions and nuclear war. The phantasmagorical, pop-art-style renderings lampoon pretty much all of the world's major political players. Meanwhile, Bradford sings, "I wanna be the president / And kill everyone / I wanna be the president / Who fires all our guns."

Anyone with half a brain can tell that the song isn't serious and that the video actually takes no political stance. Rather, it's pure anarchy. But according to Facebook, the clip violated the site's community standards and was removed. The YouTube link itself is radioactive. According to Bradford, anyone who tries to post the vid will find it removed within days. I'd say try it for yourself and see, but you might not want to after you hear what happened next.

Bradford thinks it's no coincidence that the video was flagged just a few weeks after Facebook cofounder Mark Zuckerberg's infamous 2018 congressional hearing. Members of Congress questioned the Silicon Valley superstar about his site's involvement in the Cambridge Analytica data breach scandal, in which data mined from Facebook profiles were used for political purposes — including potentially influencing the 2016 presidential election. With Facebook under so much scrutiny from users, the government and the media, Bradford thinks it's possible that large quantities of questionable material were purged in the wake of Zuckerberg's appearance. But the fact that the video was taken down was only the beginning of Bradford's problem.

For the better part of the ensuing year, every post he tried to make from the SeepeopleS account was blocked.

"It didn't matter what we tried to [post]," Bradford told Seven Days by phone. "It kept coming back with [a message that read], 'You are not authorized to post political content.'" This was especially frustrating because none of his subsequent posts was political in nature. Yet there he sat in Facebook jail.

After lengthy communications with Facebook — some of which had to be done through freaking snail mail — Bradford was able to regain some autonomy, though he was told that his account was "in poor health." This refers to negative flags or reports from users. Apparently, if enough users deem your post offensive, Facebook will determine your post a violation.

SeepeopleS can now create event posts. But for a while, the only work-around was to have the clubs they played create event pages for them.

"Facebook is an instrument of self-censorship," Bradford declared. "It's not a safe space as far as free speech goes. It's sort of a dangerous precedent: If [a post] ruffles feathers, it needs to be removed."

Bradford raises a good point. We all like to think we have ownership of what we share on social media, but the reality is, we don't.

Foaming at the Mouth

It's become a yearly tradition: Foam Brewers is throwing a mini music festival to celebrate its birthday. To commemorate its third trip around the sun, the craft brewery presents two free days of primarily local artists on Friday and Saturday, April 26 and 27. Over the last three years, the Waterfront Park suds factory has become an important part of Burlington's music scene, for locals and touring acts alike.

Burlington expat and former senior lecturer in dance at the University of Vermont Clare Byrne returns to the Queen City to present her latest album, Celestials. The folk singer-songwriter's performance and listening party takes place on Saturday at the Rose Street Artists' Cooperative and Gallery.

UVM's Springfest may be sold out, but tickets are still available for SUNY Plattsburgh's Springfest. Brooklyn-based rapper Jay Critch is set to appear at the college's Field House on Friday, while actor/comedian Marlon Wayons performs on Thursday at the E. Glenn Glitz Auditorium. If you go, maybe you can get the latter to finally answer for White Chicks.

Made In Heights, "Ghosts"