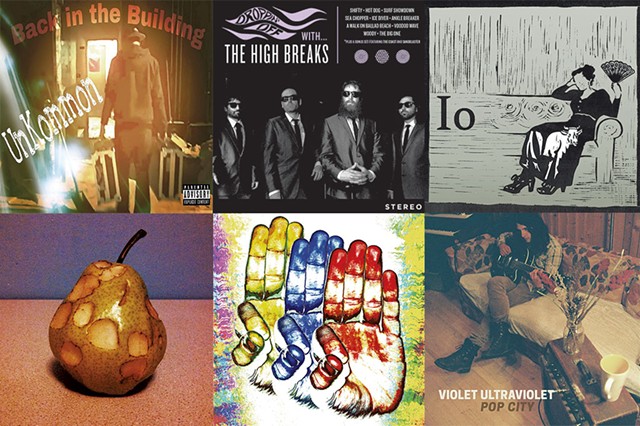 Last week, we dug into some of the best local albums released in the first three months of 2016. It was an impressive list running the gamut from folk to hip-hop to punk and beyond. This week, we cover April through June. And the collection of local records popping up in those three months might be even more impressive. As with Vermont itself, local music seems to bloom in the spring.

In early April, Cricket Blue helped thaw our frozen souls with a gorgeous EP, Io. Like the Burlington folk duo's self-titled 2015 debut, the four-song EP is short and sweet. The understated gem is as notable for Laura Heaberlin and Taylor Smith's dovetailing harmonies and heart-melting melodies as for its literary bent. This is indie folk with soul and intellect — and not in that insufferable Decemberists sort of way.

Speaking of Cricket Blue, they'll handle opening duties for a group celebrating the release of its own brilliant new record, the DuPont Brothers, this Friday, July 8, at Main Street Landing in Burlington. With the artistic aid of estimable superstar James Kochalka, I reviewed that album, A Riddle for You, in cartoon form. We'll give it a more in-depth look later this month. For now, know that it's on the short list for year-end best-of consideration.

As mentioned last week, it's been an impressive run for hip-hop in the 802 through the first six months of 2016. It's also been a tragic time, marked by the untimely passing of beloved Burlington DJ and MC Ryan Morin — aka BP. Released in the days following his death in April, Back in the Building by Unkommon, BP's duo with local rapper Kin, bears a heavier weight. It also highlights how special a talent we lost. BP was known mainly as a DJ, but he had worked tirelessly on his rhyme game, too. And it shows on the album.

Fortunately, this won't be the last we hear from him. The Aztext, the group for which BP is best known, are working on a new album featuring his unreleased verses. (In addition to founding members Learic and Pro, the Aztext now include Kin, Truth, songwriter Jamie Bright and BP's brother, drummer Ross Lincoln.) If the album comes out in 2016, it will put a cap on a great year in local hip-hop. To wit...

Mister Burns, a founding member of the Lynguistic Civilians, followed up that group's excellent 2016 release, Gratified Existence, with a strong solo debut, Raised Right, in June. Though they weren't submitted to Seven Days for review, releases by rappers Jarv (Jarvage Vol. 1) and Budnick (Dirty D) upped the quality and quantity of Vermont hip-hop.

Sadly, Blahvocado — aka Matt Pignatore — is no longer a Vermont resident. Also sad, dude still uses that goofy alias. But, as a parting gift, he left us with a stirring collection, Go Get Hurt, in April. Like his 2015 album, Suck Up All Your Guts, Hurt unabashedly reveals its classic indie-rock underpinnings. But Pignatore synthesizes the influence of Built to Spill and Pavement into a personal statement that both acknowledges and transcends his formative inspirations.

Former Bearquarium keyboardist Tyler Mast took the keys to his own jazzed-up hot rod, Paradise Divide, and spun out high-octane "art groove" on Stereo Esteria in April. A supergroup of sorts, the genre-jumping band is composed of some of Vermont's most respected players, including drummer Caleb Bronz, sax man Christopher Peterman, guitarist Colin Lenox and bassist Matt Davide.

Speaking of supergroups, acoustic trio Daddy Long Legs, featuring the holy trinity of David Gusakov, Rick Ceballos and Matt Witten, quietly released a knockout self-titled record in May. The catch: It's only available at their infrequent shows.

Turning to twang, Andrew Stearns and Shay Gestal's country project Old Sky made us nostalgic on their sepia-toned EP I Miss Blue — a follow-up to their 2015 debut, Green on Fire. Dan Johnson, with none of his Expert Sidemen, cast a spell with his rootsy solo album Magic Guitar.

Burlington may never shed its jammy stigma. And with bands such as Binger prodding the genre's wiggly conventions, that's not a bad thing. Skeptics, released in May, is a lively exposition of "prog-hop" that suggests a step forward in both songwriting and technical execution. There's enough improvisation to sate the jam crowd, but Binger clearly have artistic ambitions beyond that realm.

After a bit of an ebb tide, the wave of surf music in Vermont crested again thanks to the noir-ish Droppin' Off ... With the High Breaks by the High Breaks. If you ever wondered what might happen if Dick Dale scored a David Lynch film, here's your answer.

With 'Til the Neighbors Shout, Rumblecat claimed a place in line for the VIP room in Burlington's rock scene. They might not have crossed the velvet rope quite yet, but their technical prowess and grinning energy put them near the front door. Standing right beside them are REDadmiral, whose self-titled record revealed a refreshing lack of pretense — and loads of offbeat hooks.

When those bands do cross the rope, they'll be hobnobbing with Jake Brennan. His release as Violet Ultraviolet, Pop City, was the songwriter's finest to date. The album is bathed in a warm haze of 1970s Laurel Canyon folk rock. Yet it retains a modern feel similar to that of artists such as Kurt Vile and Real Estate. Chalk up another win for local imprint Section Sign Records.

Not to be outdone, Upper Valley sorta-label What Doth Life added to its impressive and voluminous catalog with Rite of Passage, the latest hellacious scorcher from Derek & the Demons.

After roughly four years of teasing us with the promise of a new album — and pulling a bait-and-switch in 2015 with a surprise EP, No Drinks on Me — local indie rockers Villanelles finally delivered with Blue Heart Attack. It was worth the wait and then some. Seven Days reviewer Justin Boland rightly called the record a career capstone, citing Villanelles' effortless range and insatiable sonic curiosity. Both were aided and likely influenced by producer and engineer Ryan Power. Also, the album is just fun — an explosion of signature jangle and goofy, earnest charm. It's precisely the sort of album the band has been working toward for years.

Last but not least, Matteo Palmer. Matteo. Fucking. Palmer. I try not to be the jealous type, but if I had been half as good at anything when I was a teenager — or now — as the Vergennes wunderkind is on guitar, I would have been a colossal asshole. Or more of one. Point is, Palmer's sophomore album, Embers, is the kind of work that some artists spend entire careers trying to achieve. And the kid is barely old enough to vote. Sure, it helps that contemporary instrumental music guru and Windham Hill Records founder Will Ackerman has shepherded Palmer through the early stages of his career — including producing both of his records. But Ackerman can only do so much. It's Palmer's near-divine talent and increasing musical sensitivity that sets him apart from his peers. I have seen the new age, and it is Matteo Palmer.

Toy Guitar, In This Mess

Sara Watkins, Young in All the Wrong Ways