We're midway through 2015 and already there have been more excellent Vermont records released than will fit in our annual year-end top-10 list. So last week in this column, we ran through a bunch of 'em. This week, we get to the rest of 2015's cream of the crop ... so far.

One caveat: As mentioned last week, I Hate — capital H — labeling these kinds of lists as the "best." Music is just too subjective to rate that way. Nonetheless, said lists are a time-honored convention and useful in their own fashion. So call these the "best" albums of the first half of the year, if you want. To me, they're simply examples of local recordings that really agreed with my ears in what's shaping up to be another banner year in Vermont music.

(P.S. If you're looking for news and notes on music happening over the upcoming holiday weekend, look for a special edition of Soundbites on the Seven Days arts blog, Live Culture, on Thursday, July 2.)

Maryse Smith, The Way It Is

Maryse Smith's collaboration with Michael Chorney, Rob Morse, Jane Boxall and Brett Lanier isn't just one of this year's great records, and it's not just Smith's finest effort to date — though it is both of those things. The Way It Is is among the best — there's that word again! — Vermont records of the past decade. Smith was already regarded as one of the state's premier songwriters. But working with Chorney and co. has elevated her music to luminous new levels. Her writing has always had depth, but the textures of her newfound sonic surroundings bring the nuances of Smith's songs into focus like never before. A stunner.

Sometimes I really think Gang of Thieves are a band out of time. Like, if they had been active in the late 1990s and early 2000s instead of 2015, they would go down as one of the most popular Vermont bands in history. The group's high-octane fusion of funk, punk and rock — accurately dubbed "Rage Against the Chili Peppers" by a fellow judge at a battle of the bands a couple of years ago — was already a throwback in the best sense. Then they had to go and add bombastic horns on their 2015 EP, Mantra, giving this reformed rude boy third-wave ska flashbacks.

The Snaz, Running Away From Home

Try to get past the "Holy shit, these kids are in high school!" angle. Yeah, they're young. But dwelling on their age takes the focus away from something far more important: The Snaz are really good. Lead singer Dharma Ramirez is one of Vermont's wittiest songwriters. And the rest of the band is rock-solid, too, delivering a punky, spunky take on pop that always ages well. Check out Running Away From Home 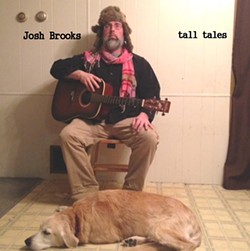 Veteran songwriter Josh Brooks owns a diverse catalog, both as a solo artist and as a sideman. But Tall Tales may be his crowning achievement as a songwriter. The Vergennes-based tunesmith is a master storyteller, bringing his characters to life with a keen eye for unusual details and a versatile voice. Sparse, spooky and queerly elegant, Tall Tales is an uncommonly compelling record.

Here's an example of how two ears can hear the same thing very differently. In her April 1 review of Old Sky's Green on Fire for Seven Days, freelancer Liz Cantrell gave a lukewarm assessment. But to my ears, the band's debut EP is a moodily stirring work that ranks in the upper tier of local Americana. Andrew Stearns (Gold Town) is a gifted writer, blessed with an expressively weary, whiskey-soaked rasp that cracks and creaks in just the right way. Matched with Shay Gestal's dulcet tones— and fiery fiddlin' — they form a formidable pair that brings to mind Ryan Adams and Caitlin Cary in their early Whiskeytown days.

The Leatherbound Books, Tender My Hopes

Tender My Hopes by the Leatherbound Books could make the list solely because it contains a love song, "Whistle While We Work," composed almost entirely of references to songs from old Disney movies. And it's not anywhere near as precious as that conceit sounds. In fact, it's pretty damn brilliant. The rest of the record ain't bad, either. Eric Daniels and Jackie Buttolph make for yet another promising Americana vocal duo that, at times, reminds this listener of John Prine and Iris DeMent. And that's a good thing.

Look for a review of Vows' debut Soon Enough Love in next week's issue. (Spoiler Alert 1: It's really good. Spoiler Alert 2: Next week is our annual cartoon issue ... wink, wink.) In the meantime, the Vermont/New Jersey duo's freshman effort, released on local imprint Section Sign Records, is an eclectic fusion of indie rock, psych and pop that primarily concerns itself with the giddy anticipation and harrowing uncertainty of new love. It is at once deliriously catchy and disorienting, which is appropriate, given the subject matter, no? In a related story, newbie label SSR is off to one hell of a start.

Little Bruce Junior, Nothing Ever Happens

In an email to 7D earlier this year, former Olympic-level runner turned hermetic central Vermont songwriter Little Bruce Junior — aka Bruce Hyde — wrote that he returned to his Waitsfield hometown to "up the weirdo quotient in Vermont." Job well done, sir. LBJ's 2015 record Nothing Ever Happens is a brilliantly strange slice of lo-fi garage blues and pop that, as I wrote in a March review, "sounds like what might happen if the Black Keys holed up in the mountains with a few handles of Jack Daniels, a pile of hallucinogens and a TASCAM four-track." I stand by that. Firmly.

One of the best records of 2015, Live at White Crow by Sneakers Jazz Band, was actually recorded in 1989. It was brilliant then, and it is equally so now. As Vermont Public Radio jazz guru Reuben Jackson put it in a recent 7D cover story on the Burlington Discover Jazz Festival, the SJB record captures a "fun, versatile, swinging ensemble." That's an understatement. SJB featured some of the most respected names in Vermont jazz history, including Dave Grippo, Bruce Sklar, Clyde Stats, Joey Somerville, Paul Asbell, Russell Remington and Jeff Salisbury. And Live at White Crow finds those revered hepcats at the peak of their collective powers, after years of playing together weekly had molded them into an incomparably tight ensemble. It's not just a great record, it's a time capsule.

Some other notable local records from 2015 that are worth your time: Death, N.E.W.; Rough Francis, "MSP2"/"Blind Pigs"; Hungrytown, Further West; No Humans Allowed, Yesterday, Tomorrow and You; Abbie Morin, Shadowproof; Lawrence Welks & Our Bear to Cross, Binary Execute Now; Allison Mann, For My Mother and Father: The Best Songs of their Times, Vol. 1; Bad Smell, "The Lost Sequence"/"AV6"; Audrey Bernstein, OK, Alright, You Win; the Movies, Wanna; Shannon Hawley, A Different Kind of Progress; Sleeping In, Sleeping In; the Red Telephone, Places You Return; Dan Johnson and the Expert Sidemen, Mercury 85; the Woedoggies, Sorrytown; Heavy Plains, Heavy Plains; Will Patton Ensemble, Time's Arrow; Tsunamibots, Surfing Craze in the Robotic Age/Rise of the Robots; Holy Smokes, Holy Smokes; Squimley & the Woolens, No Shame in the Cow Community; Ryan Fauber, Then Came the Thunder; Red Clover & the Hermit Thrush, We Get By.