When Burlington's Memorial Auditorium was condemned in 2016, its tenants were forced to vacate — including the all-ages rock club, 242 Main. Local promoters and other arts organizations have stepped in to fill the void left by the legendary venue's closure with like-minded programming. Queen City nonprofit Big Heavy World is one such proponent. The local music resource center and archive just launched a new concert series that it hopes will keep 242's inclusive, DIY spirit alive.

BHW presents each show in conjunction with one of two local DIY promoters — namely Friends + Family and Jim's Basement. The all-ages and substance-free concerts are held in the South End Arts and Business Association's gallery space on Pine Street in Burlington.

(Fun fact: According to a press release from BHW, the series is "made possible in part with generous support from AARP." All ages, indeed.) 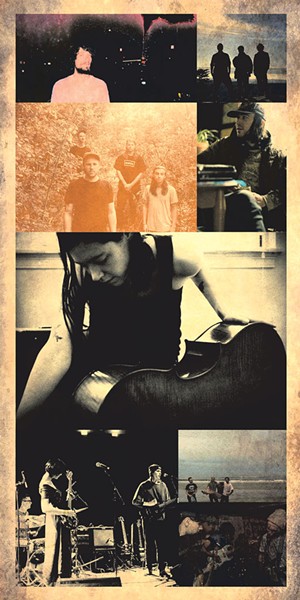 Meanwhile, a newish, all-ages St. Albans venue called the Burrow is working toward a similar goal as the BHW series. We'll have more info on that burgeoning hot spot soon.

If you haven't made it out to folk singer-songwriter Zack DuPont's Wednesday night MODA residency at the Light Club Lamp Shop in Burlington, you still have two more chances to do so: January 17 (aka the street date of this column) and 24.

What the hell is MODA, you ask? Good question! For starters, it's a limited-time-only supergroup, and the name is an acronym composed of the first letter of the last name of each of the group's members. Joining DuPont are bassist Rob Morse (Vorcza, Sound of Mind) drummer Ezra Oklan (Dwight & Nicole, Kat Wright) and keyboardist/trumpeter Will Andrews (Japhy Ryder, Willverine).

The guitarist/bandleader explained to Seven Days that the residency features new arrangements of existing material from his bands the DuPont Brothers and SoundBrother, as well as some recognizable covers and plenty of improvisation.

(Fun fact No. 2: While originally billed as the evolution of his existing fraternal folk duo with brother Sam DuPont, Zack informs us that SoundBrother shall henceforth be regarded as an entity unto itself, and that the DuPont Brothers, as a band, are still intact.)

In addition to moody folk-rock, DuPont likely will regale us with more "behind-the-music" stories like the one he told last week about getting locked out of his house moments after starting up the bathtub.

(Fun fact No. 3: A similar situation once happened to me while house-sitting for some friends. I locked myself out after putting a frozen pizza in the oven. At least now I know I can kick down a door!)

And speaking of residencies, power-funk band the Medallions are in the midst of a monthlong takeover of Club Metronome in Burlington. The time-traveling spiritual cousins of psych-pop band Madaila — but who are, like, definitely not the same band — throw down the retro party jams every Friday in January. You still have two more chances to "get down on it," as it were: January 19 and 24.

Madaila's Eric Maier tells us that the Medallions plan to rage some Talking Heads and Michael freaking Jackson at this week's throwdown — at least he thinks so. He's not actually in that band, so he can't say for sure — and plans can change.

I love it when two of my favorite artists wind up on a bill together — especially when they're groups I recently interviewed. Denver-based indie-pop duo Tennis, composed of married couple Alaina Moore and Patrick Riley, along with BFFs JJ Mitchell and Hana Elion's New York City-based folktronica duo Overcoats, distinguished themselves as artists to give a shit about in separate local performances in 2017. They join forces on Saturday, January 20, at the Higher Ground Ballroom in South Burlington.

If you recall, Tennis rocked the Burlington waterfront in July in support of elder statesmen the Shins, while Overcoats blew our minds with an April gig at Higher Ground as well as a midday set at the Otis Mountain Get Down in September. If you missed any of these shows last year, now's your chance to make it right. For the inside scoop on each project, revisit my interviews with Moore and Mitchell/Elion at sevendaysvt.com.

While we're on the subject of nationally touring acts returning within a year of their last performance, I saw some puzzling comments on a recent Facebook post from ArtsRiot. The South End venue queried its followers as to what acts they'd like to see in 2018 — which I think is a pretty cool thing to ask. However, I was surprised to see responders shouting out many of the same acts the club brought us in 2017.

Don't get me wrong — there are tons of bands I'd see again and again. But, if asked an open-ended question such as the one posed, I'd surely request something fresh. Like, maybe Electric Guest? Pretty, pretty please?

The Burlington music scene bid adieu to one of its most unsung heroes in the fall of 2016: Nick Mavadones of Higher Ground and Waking Windows Presents. The behind-the-scenes workhorse traded B-town for Motown nearly a year and a half ago, taking on managerial duties at Detroit live-music venue El Club.

But, as of New Year's Eve, Mavadones is back in town and on board full time with WW. Welcome back, dude!

And speaking of Motown...

...Monday, January 22, marks the two-year anniversary of Motown Mondays at the Monkey House in Winooski. DJs Fattie B and Craig Mitchell host the twice-monthly event and spin a scorching blend of classic soul, R&B and funk tunes. Aside from rump-shaking jams, the free event always features a home-cooked crockpot meal from Mitchell, who dips into his own pocket to cover the cost of feeding anyone in need.