One mildly frustrating thing about writing a weekly print column is that I have to wait at least until the following week's paper to address any clarifications, corrections or updates about news I've broken or events I've previewed. And sometimes it takes longer than that. For instance...

Two weeks ago, in the January 31 Soundbites, I mentioned that Paper Castles and Erin Cassels-Brown would perform on Wednesday, February 7, at the next round of Big Heavy World's Rocket Shop Live at ArtsRiot. If you recall, the weather that night was the definition of shitty, and the show was thus postponed until Saturday, February 24. Um ... yay? Everybody's working for the weekend, after all.

Also, I previewed JUPTR's return in the first 2018 edition of this column on January 10. The neo-soul ensemble was supposed to perform on Saturday, January 13, at Nectar's in Burlington but had to cancel the show — news that didn't break until after the paper went to press. If you haven't figured it out by now, the kinda-sorta reincarnation of Smooth Antics is one of my favorite new acts in the area, and I was pumped to catch that Nectar's set.

This week, the group makes its triumphant return alongside Vinegar Mother on Saturday, February 17, at Foam Brewers in Burlington. The waterfront craft beer factory is where I fell in love with JUPTR in the first place, so I'm sure it's going to be a magical evening.

One more thing: Last week, I probably should've noted that James Kochalka's appearance at Zeno Mountain Farm's 24-hour dance marathon technically runs contrary to his announcement last year that he was retiring from performing. I guess his set at the semipublic event didn't violate his withdrawal from the stage.

"When I retired, I told Zeno that I would play any shows they want, whenever they want," Kochalka writes in an email. I guess that settles it!

News flash: Wednesday, February 14 — aka the street date of this column — is Valentine's Day. If you aren't busy making googly eyes over an overpriced prix fixe dinner or snuggling up on the couch to binge-watch every Nicholas Sparks movie with your sweetie, you might consider saying "Screw you" to that insipid archer Cupid in favor of something a wee bit darker.

Two top-notch Burlington bands, Swale (who, for this event, shall be known as Black Swaleth) and Surf Sabbath (who look a whole darn lot like local surf-rock band the High Breaks) team up at Nectar's for a tribute to recently retired metal pioneers Black Sabbath.

Swale plan to take on the group's seminal 1970 album Paranoid, and Surf Sabbath will provide a smattering of choice cuts from across the UK rockers' discography. This is neither group's first attempt at rejoicing in the satanic Brits' shadowy splendour, so you're in pretty good hands. (See what I did there? That's the British spelling of "splendor." I'm so fancy!)

Folks, a band called Troll 2 performs on Wednesday, February 21, at Radio Bean in Burlington. I'm pointing this out because the Boston-based folk-punk outfit sports the name of one of the worst films of all time, and I think that's genius — and hilarious.

If you've never seen it, allow me to fill you in. Troll 2 is to '80s-era creature features as Tommy Wiseau's The Room is to early-2000s indie dramas. In other words: It's a god-awful mess of amateur filmmaking, incoherent story lines and terrible acting. Actually, it would make a pretty great entry into David Zeidler's ongoing Cinema Casualties film screening series.

Unlike the aforementioned turd of a flick, Boston's Troll 2 seem like a pretty dope group! Ferocious punk rock meets Appalachian folk's rustic charms in an explosive and nuanced combination. According to their website, they "[enlighten] people about important social and political issues like climate justice, addiction, carpet bombings, our breakups and alien abduction." I'm sold.

OK, one more thing about Troll 2, the movie: Other than its title, Troll 2 bears no connection to the 1986 film Troll. And there aren't even any trolls in it. The creatures in the flick are goblins. Goblins!

By this time last year, the crew behind Waking Windows had already announced the lineup for its three-day music festival in Winooski. That means the roster for this year's edition, which spans Friday through Sunday, May 4 through 6, is coming any day now — specifically Friday, February 16. If I were you, I'd keep myself glued to my various social channels in anticipation of an imminent notification.

Beyond the lineup, I also speculate that this year's festival will have some fun new locations. For instance, there's now a record store on the Winooski roundabout: Autumn Records. I mean, jeez, how could it not be utilized?

Furthermore, if the former KeyBank building on the corner of Main and West Allen streets remains vacant, it could potentially be a pretty cool, industrial concert venue. Overnight Projects had a hand in making the space tenable for its event with Portland, Maine's performance-art group Hi Tiger last October.

Again, I'm speculating. The only thing we know for sure is that Waking Windows will kick all of our collective asses with its amazingness. 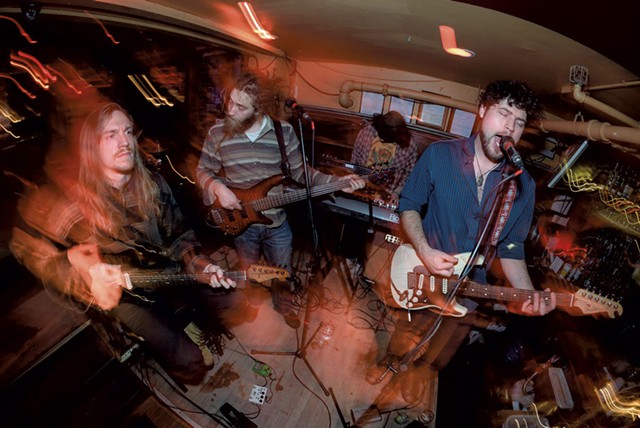 Funk-rockers Dr. No and the Mangroves host the Icebreaker Ball on Saturday, February 17, at Nectar's. Along with bluesy Jeff Salisbury and his band, the groups throw down the funky-fresh jams as per usual. What's different is that everyone in attendance sports a name tag. Think of it like the first day of a corporate team-building conference, except in this case you might actually want to be there.

From "Crazy Ex-Girlfriend," "A Fuckton of Cats"

Ebn Ezra, "Across the Green Steppe"