Soundbites: Someone is Pretending to Be Jer Coons on Tinder 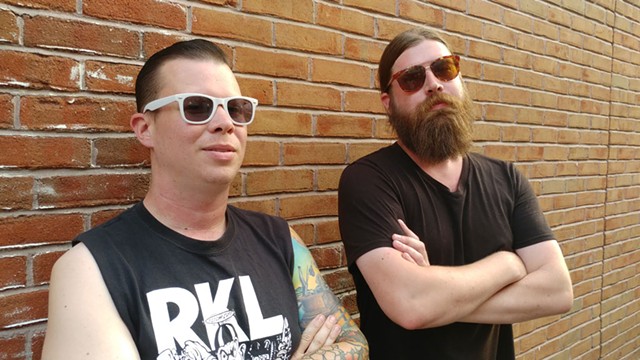 Last week, we bid adieu to Burlington indie rockers Gestalt, whose relocation to Seattle is imminent. It's always sad to see local acts call it quits or move on to far-off places. But one thing that makes it hurt less is that, without fail, a new act springs up to fill the vacuum.

With that in mind, consider this the official announcement for new pop-punk outfit PREECE. Expect the new project of drummer and perpetual side-man Sean Preece (the Welterweights, the Grift) and Madaila bassist Jer Coons to be "melodic, fast, fun [and] loud as shit," according to the duo. In addition to Preece and Coons — who both play guitar in the new outfit — PREECE features Dan Smith on drums and Daniel Bishop on bass.

"I've been talking with Jer for years about doing this, and finally it's happening," Preece, who recently spent two years living in Oakland, Calif., tells Seven Days. The Bay Area — and coastal California in general — is known as an incubator for similarly punkish projects. Preece returned to Vermont brimming with passion for the new project and a burning desire to take on fronting duties. Preece finally steps into the spotlight when PREECE make their debut on Thursday, August 16, at SideBar in Burlington.

But wait, there's more! Not only is this a new band announcement, it's a new album announcement. Shortly after their live debut, PREECE will unveil their first full-length LP, Bad Choices Make Good Stories, on Friday, September 14. Recorded at Coon's Future Field studios, it features guest appearances from fellow Welterweights Kelly Ravin and Lowell Thompson.

...Someone is catfishing Coons. OK, that's not exactly accurate. Someone is catfishing other people as Coons. Do we have an internet slang term for when you discover that someone is erroneously using your own likeness on a dating app? Are they perhaps "dogfishing" you? Feel free to come up with something better than that if you like.

If you're unfamiliar with catfishing, the term — which comes from the 2010 documentary Catfish — refers to personal misrepresentation on the internet and social media. In other words, you fabricate an online persona that isn't you, steal someone else's photos and use the new identity to trick people in various ways.

For example: In the film, a young photographer tracks down his new out-of-state, online girlfriend after he begins to suspect she and her family may not be what they seem. (If you haven't seen the flick, you should, because it's one of the most suspenseful and intimate pop docs of the 21st century.)

Anyway, back to Coons' problem. According to an Instagram post on the 29-year-old's public account, he claims someone has been using his likeness on dating app Tinder for approximately a year and a half. A screenshot shows a Tinder profile for a 32-year-old named "Andreas" whose profile picture is clearly a shot of Coons rocking the eff out. WTF?

"This past week, a friend of mine sent me a message on Facebook," Coons says. "[She asked,] 'Did you change your name? Is this you?' And then I'm like, 'Oh, my God. This motherfucker is still at it!"

Coons tells Seven Days that the issue first popped up mid-2017 and resurfaced this week. After alerting him to the profile, Coons' friend recently matched with "Andreas" and started chatting online with him in an attempt to discover the catfisher's true identity.

In screenshots of their conversation, also viewable on Instagram, "Andreas" claims to be a musician who, just like the real Coons, co-owns Future Fields and plays in Madaila.

"It's flattering in a weird way, but 99 percent of my feeling about it is just deep discomfort," says Coons. "Has this person creeped on people on the internet pretending to be me for a year and a half?"

Aside from having his likeness and identity stolen, Coons was particularly offended when "Andreas" misquoted a Mitch Hedberg joke and didn't even bother to attribute the botched zinger to the deceased comic.

When asked why he couldn't meet up for lunch, "Andreas" told Coons' friend, "Let's just say I don't have a 'girlfriend,' but I know a girl who'd be upset if she heard me say that."

Hedberg's actual joke goes, "I don't have a girlfriend, I just know a girl who would get really mad if she heard me say that." If you're gonna steal, get it right!

Consider this a public service announcement: If you match with "Andreas" on Tinder, beware. You are being catfished.

Now, is it possible that this whole thing is an elaborate PR stunt for Coons' upcoming solo album? Doubtful. I just wanted to segue into briefly mentioning his forthcoming record. We'll dig deeper into that as the release date — Friday, October 13 — draws nearer.

One final thought: This whole thing should probably be explored in the next installment of the Vermont Comedy Club's 2018 Seven Daysies-winning improv show Tinder Nightmares. Just sayin'.

If you're looking to bask in the warm and wonderful sounds of some of Vermont's finest folk musicians, you should head to Stowe for the Spruce Peak Folk Festival on Saturday, August 11. A fine roster of acoustic balladeers descends on the Village Green at Spruce Peak, including headlining Vermonter Anäis Mitchell, plus Josh Ritter & the Royal City Band and Elephant Revival's Daniel Rodriguez. A selection of local "buskers" kicks off the daylong event: Americana singer-songwriter Abby Sherman, Eastern European-tinged band the Last Train to Zinkov, 2018 Daysies winner for best folk artist the DuPont Brothers, Romani-inspired ensemble Danza Del Fuego, and ONEoverZERO vocalists Dan and Modou.

VT rappers Mister Burns, eyenine and 2018 Daysies winner for best hip-hop artist, Jarv, team up with Atlanta-based rapper Dillon for the Will Rap for Art Tour. The 11-stop trek through the Northeast launches on Thursday, August 9, at the Monkey House in Winooski. In addition to throwing down hot beats and ill rhymes, the crew is raising money for local arts initiatives in each city it visits.

To raise money, a different visual artist will create a new work at each show. The painting is raffled off at the end of the night, and proceeds support the chosen arts organization. At the kickoff event, Anthill Collective's Fortune will create the raffle item, with proceeds going to the South End Arts and Business Association.

Frida, "I Know There's Something Going On"

Lawmakers, Professionals Call on Scott to Amp Up Pandemic Response