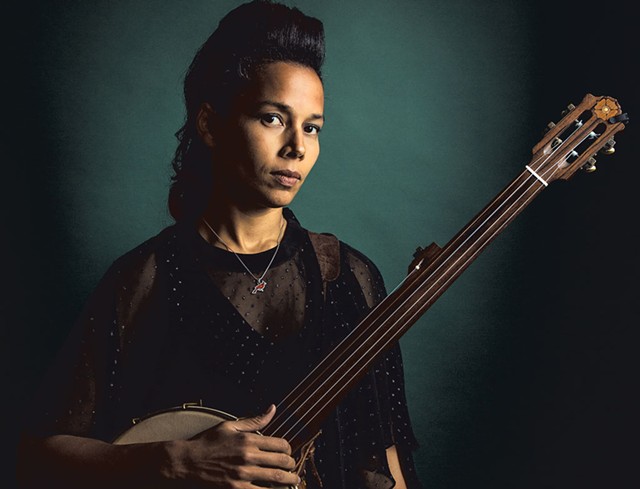 You may have heard that Vermont PBS and Higher Ground have teamed up for a brand-new television program called "Bardo: A Night in the Life." The docu-style series features host and creative director Ryan Miller (Guster) in conversation with local bands and artists or acts who've come through the Burlington area to play the South Burlington rock club. The series, which will include four episodes, premieres Thursday, May 3. Cord-cutters can peep the debut online the following morning.

"[We] want to present something smart, artistic and revealing, all against the backdrop of a single night in Vermont," Miller tells Seven Days in an email. "There's a lot of discovery: how to shoot and structure the show, what stories to tell, and how to tell them in a beautiful, intelligent way."

Each episode will reflect the personality of the featured artist. A little preview of Rose's episode: Apparently, she and Miller ride around Burlington on Segways in full costume.

"Ryan's a perfect interviewer because he makes you feel relaxed right away," Rose writes in an email. "[But] it's a bigger production than I was expecting. I had no idea there was going to be a giant crane in the middle of the club."

WW on the DL

I hope you've had a chance to take a look at our extensive cover package about Waking Windows in this week's issue. We've pretty much covered all of the bases, so there's really not much more I can say about it. However, I do want to speculate about and draw attention to the fact that a secret mystery guest is scheduled to conclude the Friends + Family Showcase on Friday, May 4, at Lucky Cloud — aka the old KeyBank building.

For starters, let's look at what we know about Friends + Family as a booking collective. According to the Facebook event for the showcase, the group aims "to use events to create a safe space for musicians and artists who have historically been underexposed or barred from performing because of their gender, sexual identity, ethnicity, ability, age and means."

So it has to be someone fringe-y. But the fact that it's secret means it's almost definitely someone with name recognition — maybe even someone with ties to Vermont. Anyway, you know where I'll be on Friday night.

Oh, and one more thing about the festival: If you've never seen Midnight Magic, you'd best get yourself to the Main Stage on Saturday night to see the massive NYC disco ensemble. You will lose. Your. Freaking. Mind.

I know we haven't even gotten through Waking Windows yet, but let's take a moment to look at the next big-ass music festival headed our way: Burlington Discover Jazz Festival. The fest runs Friday, June 1, through Sunday, June 10, at various locations around Burlington and Winooski. The featured events lineup was finalized last week.

This year's roster includes an impressive and diverse assemblage of folks from across genres and has a strong showing of female artists. Like all creative fields, women are underrepresented in jazz. But BDJF makes good on its mission of inclusivity with headliners Rhiannon Giddens of Carolina Chocolate Drops, saxophonist Camille Thurman, Nicole Mitchell & Christina Wheeler with their new polyphonic project Iridescent, and artist-in-residence Anat Cohen & Choro Aventuroso.

Perhaps it was comments like this one from Glasper that sparked outrage: Referring to Iverson's work in jazz trio the Bad Plus, Glasper says, "I've had people tell me about your music. Like, women that you would think never listen to jazz: Young, fine Euro chicks ask me, 'I heard this band, the Bad Plus, do you know them?'" Oof.

Berliner's missive is a lengthy assessment of women in jazz. Spoiler alert: It sucks to be one, and public conversations such as Iverson and Glasper's that reinforce sexism with regard to the genre need to end.

We'll have much more coverage of BDJF in the weeks to come.

Though odd-pop singer-songwriter James Kochalka Superstar is pretty much (almost probably definitely) retired from live music performance, he's still active in his other artistic pursuits. One of his long-gestating projects, an animated TV pilot called "Plunger the Dragon," recently saw the light of day.

Created for Nickelodeon in 2015 after about a year of development, the brief cartoon short depicts the exploits of a plucky young dragon with big dreams. Voiced by "Married With Children" costar David Faustino, Plunger hopes to one day achieve his lifelong goal of becoming a professional plumber. With a greedy, cynical squirrel sidekick named Nixon at his side, the two are polar opposites living in an idyllic fantasyland.

The short also features original music by Burlington expat Neil Cleary, member of fabled Burlington band the Pants. Whether or not it will go beyond its four-minute pilot is unknown. Visit Nickelodeon Animated Shorts' Facebook page to check it out.

In other Kochalka-related news, another piece of the artist's work was showcased in this week's Sunday edition of the News York Times. The illustration features a story about how, in his youth, the artist came to procure a copy of Peggy Herz's The Truth About Fonzie, an in-depth look at Arthur "The Fonz" Fonzarelli from TV's "Happy Days" and Henry Winkler, the actor who played him.

Kochalka's comic describes the oddly specific impact the tome had on his life. You really need to see it to get the full effect. As is usual for the "Hockey Monkey" singer, it's kind of out there.

Correction, May 4, 2018: An earlier version of this column misstated the total number of episodes of "Bardo: A Night in the Life." There will be four.