Soundbites: San Mateo Gets Its Own Beer, and Joe Adler Has a New Band

Summer is fading fast. Shadows are growing longer; the students are back; people who never switched out their snow tires are deciding that, Fuck it, it's close enough to winter again to just leave them on.

You know, all the usual harbingers.

Matt Hagen is trying not to hear that, though. The busiest musician in Burlington — apologies to Tyler Bolles and Dan Ryan — is in a sunny headspace these days, thinking about the sounds of Puerto Rico.

"I'm not great at sitting still," Hagen confided to me on a recent walk downtown. I resisted the urge to say, "No shit, Matt."

Hagen's projects are as eclectic as they are numerous. He's most notable these days for his surf-rock outfit, the High Breaks. The band released a concept album called Smirk of the Dolphin last year about the forbidden love shared between a man and, well, a dolphin. It's complicated. Stay tuned to Seven Days' Live Culture blog if you're intrigued. The High Breaks recently performed the album in its entirety, and I'll be offering highlights and reviewing the piece in the coming weeks.

Hagen's latest creative endeavor is called San Mateo. The band is composed of fellow Burlingtonian Craig Mitchell and former Grace Potter & the Nocturnals drummer Matteo Burr, fka Matt Burr, who now lives in Puerto Rico. Rounding out the group is a collection of Puerto Rican musicians who function similarly to the famous Wrecking Crew — that is, a session band attached to a recording studio. In this case, Burr's studio: San Juan Sound.

"Matt started this studio in San Juan that used to be a radio station," Hagen told me. "It still is, actually, but he's created this completely amazing space now; it's unreal."

San Juan Sound isn't just a studio. It's also a nonprofit organization dedicated to providing support and facilities for Puerto Rico's musicians, many of whom have struggled following recent economic and natural disasters on the island. Burr recently released a compilation album on vinyl, San Juan Sound, pressed at Burlington Record Plant. The album features and benefits some of the island's best independent musicians. You can see the gorgeously designed record at sanjuansound.org.

The compilation is also available at Vermont records stores. And it can be purchased directly from Hagen on Tuesday nights during his residency, along with Bob Wagner (Kat Wright, Dark Side of the Mountain), with Local Dork at Foam Brewers in Burlington. While you're there, you could try Foam's limited-edition craft beer called, fittingly, San Juan Sound.

"The flavor profile is inspired by one of Puerto Rico's finest sipping rums, Ron del Barrilito," Hagen said. "I tried it yesterday, and it's really good."

Hagen has his fingers crossed that the brew lasts until the Local Dork show at the brewery on Tuesday, September 7. He and Mitchell are hoping Burr, who is currently stateside for a bit, will join them for a debut/listening party for San Juan Sound.

Meanwhile, San Mateo have released several singles, all recorded at Burr's studio, with a full-length LP to follow in 2022. The band also revealed a new video for the track "Can't Get Enough," a love letter of sorts to Puerto Rico.

While we're on the subject of dudes who keep a lot of irons in the fire, Joe Adler also has a new project. The troubadour and local music impresario, known for his Rangers of Danger project and his folk music collaboration with Marcie Hernandez, a.m. rejoice, launches a new duo this Thursday, September 2, at the Intervale Center in Burlington — aka the final Summervale show of the season.

Titled Songs & Stringstruments, the duo consists of Adler and multi-instrumentalist Eric Segalstad, the owner and operator of Sabi Sound recording studio in Colchester. He also played with Adler in the Wee Folkestra. (I gotta talk to Adler about these band names, man.)

In an email to Seven Days, Adler writes that the project is "based around a batch of deeply personal, inward-looking songs" that he composed during lockdown last year — 37 songs, to be precise! (I bought an air fryer and watched the entire series run of "Northern Exposure," if you're wondering what I was up to.)

Adler writes that the songs reflect the uncertainty of that rather shitty year, and they tell stories "about everything from daydreaming about Parisian adventures to confronting the influences that seek to divide cultures."

Segalstad accompanies Adler on a variety of stringed instruments, many of which he has collected from around the world. Songs & Stringstruments are currently recording their debut LP at Sabi.

For the Summervale show, Adler and Segalstad have enlisted some of the area's finest players. Aya Inoue, Segalstad's wife and a member of the Wee Folkestra, steps in as colead vocalist. Tyler George-Minetti, formerly of That Toga Band, provides guitars and lap steel, while Caleb Bronz (Barika) handles drums. In an alarming development, Bolles joins on upright bass, which I believe puts the Rough Francis and Swale bassist in the century club for musicians who are in exactly 100 bands at the same time.

In all seriousness, Songs & Stringstruments look like a killer band on paper. Head over to the Intervale this Thursday to check them out. Brett Hughes & the Honky Tonk Crowd headline. 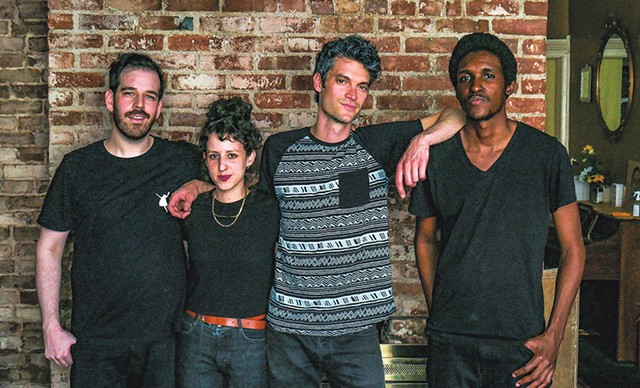 Salloway makes his comeback to the Green Mountains this week with Billy Wylder, a band that fuses his natural folk and indie rock leanings with global rhythms. Salloway toured and recorded for a few years with Tuareg guitarist Bombino, and that influence informs Billy Wylder's hard-to-define sound.

Touring behind their new EP Whatcha Looking For, Billy Wylder will make two Vermont stops this week. The first is Saturday, September 4, at Zenbarn in Waterbury Center.

Then, on Sunday, September 5, the band headlines its own festival, the Moonshine Music Festival. The fest is in its sixth year at Earth Sky Time Farm in Manchester, and Salloway, who founded the event, is feeling the excitement.

"We created the festival in an effort to bring people together to experience great live music, public art-making, freedom, dance and to deepen their connection to local, organic farming and community building," Salloway wrote in a press release.

Along with Billy Wylder, the festival features the music of Venezuelan musician and journalist Mafer Bandola and Madagascar-born singer-songwriter Mikahely. Tickets are available at eventbrite.com or brownpapertickets.com.

After more than a year of being shuttered, Brandon Music reopens with a bang on Saturday, September 4. The venue/café/classical music repository welcomes Irish American fusion band Gypsy Reel to the barn-turned-venue for a night of music and food. The show starts at 7:30 p.m., and tickets are $25.

If you arrive a little earlier, at 6 p.m., however, you can order a three-course meal for an additional $35 and eat in style before the show starts. Don't forget to check out the nearby Compass Music and Arts Center. The Divine Art CD store features a massive collection of international classical music, and there's a collection of vintage "talking machines" housed in the awesomely titled "Phonograph Rooms." Get some culture, people!

The Howlin' Mouse celebrates its fifth anniversary this September. The Rutland record store, which also hosts live acts, open mics and community benefits, has become a staple in southern Vermont. That is especially important, as most of the state's decent record shops are in the central and northern parts of the state.

"We were strangers to Rutland when we arrived 6 years ago," co-owner Rick Skiba wrote in an email. "And after all that has happened in the world the last several years, to still be here, where we opened, it speaks volumes of what we have done, and what we are doing here."

So if you find yourself in the Rutland area, swing by the shop and pick up some vinyl to help the Howlin' Mouse celebrate its anniversary. Consider this a reminder from your friendly neighborhood music editor: Never take record stores for granted.