Now that COVID-19 is the only thing on anyone's mind, it's getting harder and harder to remember a time when we weren't preoccupied with handwashing and maintaining a six-foot distance from others. But the new reality is also leading to an abundance of artistic creativity. For instance, livestream concerts are on a serious rise.

Related In My Room: Tips for Doing Livestream Concerts

In My Room: Tips for Doing Livestream Concerts
By Jordan Adams
Music Feature

And some people are getting kind of famous for their coronavirus-related artistic projects, including Burlington's Urian Hackney. Forgive the untimely pun, but a new video from the Rough Francis drummer has gone certifiably viral after he posted it online on Saturday.

Hackney reimagined Nirvana's "Stay Away," a classic cut from the Seattle grunge band's defining 1991 album, Nevermind. Dubbed "Stay Inside," Hackney's version is a social-distancing and sanitation anthem. He shot the video in his South End recording studio, the Box. Quick cuts show the multi-instrumentalist playing guitar, bass and drums throughout the three-minute video, intercut with goofy shots of him brandishing Lysol toilet bowl cleaner and scrubbing doorknobs.

"It's a song I've always been into, since I was a kid," Hackney told Seven Days on Monday. "The only expectation I had was to send it to my dorky engineer friends and the dudes in my band."

As of Monday afternoon, the video had accumulated more than 130,000 views, and more clicks were piling on with every page refresh. Multiple culture sites have picked up on Hackney's foray into the world of parody music. For instance, the A.V. Club posted a list ranking the top seven coronavirus-inspired song parodies, and Hackney's landed at No. 1. He even beat out the legendary Neil Diamond, who recently uploaded a new, handwashing-themed revamp of his top hit, "Sweet Caroline."

At this rate, the view count is likely to reach nearly half a million by the time this column hits the street. So how did what started as a half-serious way to blow off steam turn into a bona fide internet sensation?

After "someone posted my dumb video on redit [sic]," as Hackney pointed out shortly after it went live, Nirvana's official Twitter account posted the video, which was subsequently retweeted by former Nirvana drummer Dave Grohl's band, Foo Fighters.

"I'm surprised they actually liked it," Hackney said. "I guess it goes to show the sound is pretty on point."

That's perhaps the main reason the silly parody resonated so much with fans of Nirvana and the music community at large. Hackney's production skills resulted in a pitch-perfect re-creation, with all of the instrumental and vocal tones sounding uncannily like the original track.

"A lot of what I do is explore other engineers' techniques and sounds to offer more to my clientele," he said.

Are you a Vermont-based artist planning to livestream a concert, open mic, DJ set, improv show or otherwise? Please let us know! Just as everyone is learning how to adapt to life under quarantine, Seven Days is figuring out how to make sure our readers can find out about virtual events that would normally fill up our local bars, restaurants, nightclubs, cafés, etc.

We'll post a list of livestream events every Thursday on our Live Culture blog for the foreseeable future. Want your set to be included? Email music@sevendaysvt.com with a link to your stream or an event page with the relevant details. If you're just planning to play via Facebook Live and haven't made an event page for your upcoming streaming concert, make one! It's super easy. I realize that Instagram doesn't have an event function, but I've found that some folks are making Facebook events directing people to Instagram. 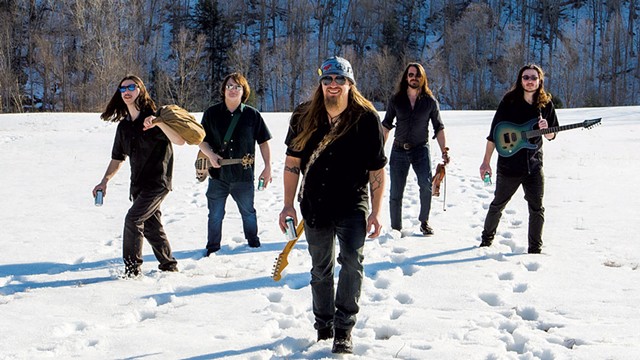 While many folks are hopping on the livestream bandwagon, a group of music professionals out of Rutland is taking things a step further by prerecording a concert and broadcasting it online later this week.

"We're trying to rally and come up with something that can help people make a few bucks and continue to make music," said George Nostrand of rehearsal space and DIY recording studio A Sound Space.

Nostrand and a team of music professionals recently staged and shot a concert featuring the Krishna Guthrie Band, which is fronted by the son and grandson of lauded singer-songwriters Arlo and Woody Guthrie, respectively.

The video, which was created using multiple cameras and stage lighting, will be available to stream via A Sound Space's Patreon page on Saturday. Patreon is a paid artist subscription platform, so viewers will have to shell out a few bucks to watch the concert.

"A lot of people are throwing their phones on a table and playing into their phones," Nostrand said. "We're looking to do higher-quality productions."