Soundbites: Rough Francis Anniversary and Season Two of 'The T' 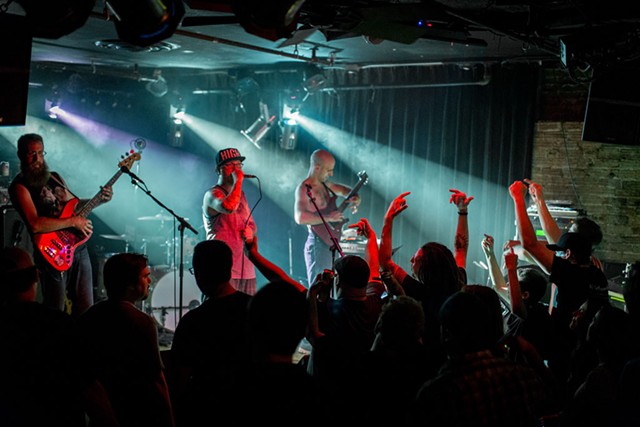 Season's greetings, music lovers. We're just a few weeks away from the end of the year, and practically every musician and their entire extended family are gearing up for some kind of special holiday throwdown. We'll take a look at many of those in next week's edition of this column, but a couple of seasonally appropriate events are going down this week, such as...

...the seventh annual Metal Monday Xmas Bash on Monday, December 17, at Nectar's in Burlington. The formerly weekly shred fest kicks it yule-style with scene veterans Savage Hen and newcomers Melkor. Also in the mix are the unfortunately named Boil the Whore, who make their return to the Metal Monday stage for the first time since 2015.

Now, I can't just let the name Boil the Whore go by without examination. I mean, it has to be one of the most eyebrow-raising local band names I've seen in a while. It's unambiguously violent and misogynistic. To get a little perspective, I asked the band what the deal is with its aggressive moniker.

Vocalist Dave Huckabay explains via Facebook message: "The short answer is, no, the name has no real meaning or intent other than to be an indicator of the band and the style of music we play. The name would, to the average person in passing, be construed as violent and misogynistic if you were to take it for its absolute literal sense.

"The name is meant to shock and offend," he continues. "However, we hope any who enjoy our music or performances have the ability to differentiate the performance from literal promotion [of] violent or misogynistic behavior. I liken it to people who enjoy horror films, true crime TV or any other strange, morbid curiosity — while knowing fully that they would reject these actions in the real world."

Fair enough, I suppose. It's always good to ask thoughtful questions before rushing to judgment. Interestingly, the real treat of chatting with Huckabay was the realization that we actually grew up together in the same Addison County church. What a revelation (pun intended)! Small world we got here in the Green Mountains.

But anyway, back to the event...

Savage Hen have a special treat for lovers of heavy, brooding rock: a new album! Dubbed The Red, the 10-track offering is like two concept albums in one. Side A features five pieces inspired by B-movie horror tropes. Choice cut: "The Monster," a ragged, blood-curdling banger.

Side B, however, includes subversive, doom-filled reinterpretations of a smattering of Christmas tunes, including "Here Comes Santa Claus," "Jingle Bell Rock" and "Rudolph, the Red-Nosed Reindeer." There's something deeply comical about the former's lyrics "Bells are ringing / Children singing / All is merry and bright" when they're shouted full force with a guttural growl.

Two original holiday jams cap off the record. "The Wrong List" deliberates on the naughty/nice dichotomy ("You're on the wrong list and there's no getting off / You shouldn't have been such a dick"); while "Christmas Bath" is a whimsical carol perfectly encapsulated by its title ("I want to be in a Christmas bath / Wash until the New Year.")

You can stream the record on Bandcamp, or pick up a CD copy at the show.

After an initial set of jazz-infused versions of popular Christmastime songs, Von Staats and co. present Vince Guaraldi's score from the original TV program in its entirety. I suggest watching the special before attending — particularly the pageant rehearsal scene, so you can brush up on your awkward-AF dance moves.

Drag queens Emoji Nightmare and Nikki Champagne return to the small screen for the second season of "The T." The talk show's first season aired in 2017 on Vermont Community Access Media. Conceptually, it's a roundtable discussion with various local so-and-sos who hash out various subjects relating to the arts, media and politics. In an email to Seven Days, Emoji Nightmare likens the show to Bravo's "Watch What Happens Live With Andy Cohen."

The second season, which kicks off on Thursday, December 20, continues the following three Thursdays, concluding on January 10. But instead of broadcasting from VCAM's studio, the queens et al. will stage the program at Burlington's Vermont Comedy Club. VCAM will continue to broadcast the new episodes.

You can watch the series — and other VCAM programming — on cable (Xfinity), the internet or the Roku streaming channel Media Factory.

Riot-rockers Rough Francis continue their ongoing 2018 10-year anniversary celebration this Saturday, December 15, at the Monkey House in Winooski. Roughly a decade ago, the band played its first show ever at the former punk club 242 Main. The following night, they played the Monkey House.

Through lineup changes, major life events such as marriage and children, and industry red tape, Rough Francis have endured. They're currently one of the longest-running rock bands in the state. Earlier this year, the quintet finally dropped its long-awaited LP, MSP3: Counter Attack.

New this week is a delightful animated video for the band's song "Panthers in the Night," courtesy of Keith Ross of Tiny Concert (not to be confused with NPR's Tiny Desk Concerts). The animator creates hand-drawn cartoon renderings of rock bands, animates and syncs them to a song by the artist, and uploads the clips to his Instagram account. Since January, Ross has created clips for the Ramones, Motörhead, Cyprus Hill and others. Rough Francis are the latest to get the pen-and-ink treatment.